A Hab Fan Is Born!

Share All sharing options for: A Hab Fan Is Born! 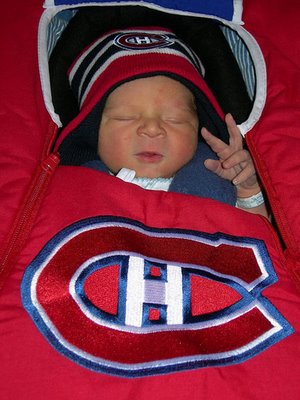 This little fella, ( we'll call him T ), was a hit with the ladies the minute he strolled out of the hospital. The girls just couldn't help it - "too cute" they all chimed!

Little T was the talk of the newborn ward, when he came into the world wearing the Habs toque. Rumours began before he's had his first cry even.

Had the father fitted him with the toque?

Was it a sly doc that did the trick?

Nobody blinked - perhaps the boy just came out ready for winter!

No one is saying, but word around the household is that little T has not cried since seeing himself in the mirror. Pretty understandable in my eyes! 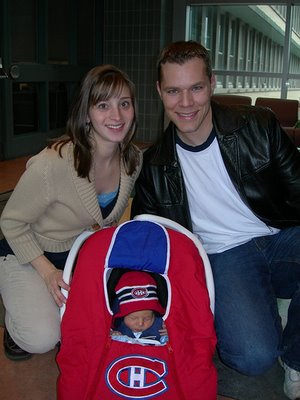 The only thing little T's Mom and Dad are concerned about, is his attitude. Why, only a couple of days after being home, T showed that he has no tolerance for deviance under his roof. Sitting on Mom's knee at the kitchen table while feeding, his gaze spied Mom and Dad's dinner plate of hot dogs!

"Phhhhhffffttttsssssssssssssss!" said T, slobber rolling down his chin for emphasis, as he pointed to the half filled package of weiners nearby.

Mom and Dad were stunned somewhat to see T point a finger so soon, and were sweetly seduced into handing him the package of weiners.
T held them firmly.

He starred intently at them.

He gave a little sneer and proceeded to fling the entire remnants of the package directly in an awaiting ceiling fan, shredding them to bits.

"Cut him some slack, Mom, look what brand you bought!"

Picking the wrapper up from the ground, Mom bonks her forehead with the base of her palm as if to say "Duh!"

"What was I thinking?" she sighed, "Maple Leaf Wieners!"

It was the closest T came to crying since being born.

Congratulations to the B****** family on their new arrival. Thanks for sending in the pic. Should this little man grow up with respect and proper good manners, it shouldn't be too long before he's hanging out with the right crowd. 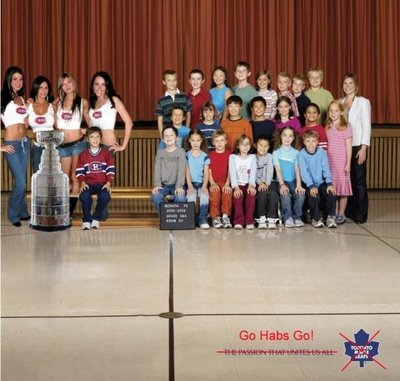