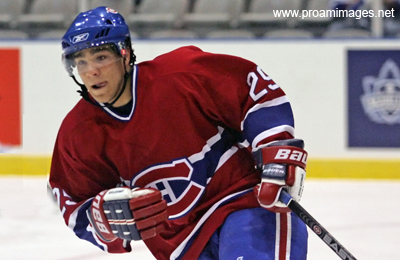 "A star is born" was the quote from Habs grinder Steve Begin as the doors swung open to reporters following the Canadiens 3-2 exhibition win over the Islanders Friday night.

D' Agnostini, for the record, potted two goals including the game winner in overtime.

As a Hamilton Bulldog rookie last season, D'Agnostini quickly showed a knack for such timely goals, and it appears the trend has continued throughout the Canadiens training camp. In scrimmages during red and white games, he was a regular on the scoresheet. Against Pittsburgh Monday night, he hardly looked out of place.

If he was the name on some lips through the early part of camp, he is now the name on everybody's lips right now. 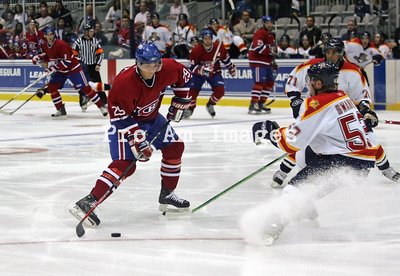 Fellow blogger Matt Macaskill ( Habs World, Current Habs, and Drive to 25 ) was the first person to bring attention to D'Agnostini at last year's rookie camp, and has been high on him ever since.

During a spell last season when D'Agnostini was injured, the Bulldogs promptly slumped and rose with his return.

After the Islander game, Habs coach Guy Carbonneau set the bar high for D'Agnostini, while complementing him with Hall Of Famer comparison.

"To make the NHL, D'Agostini "has to be involved. His timing is good. His shot is NHL calibre. What he has to work on is when he doesn't have the puck. He has to be strong on the wall, a reliable player who can push people away."

Carbonneau repeated that D'Agostini reminds him of Michel Goulet, a player who "you don't notice until the red light goes on." The rookie, he said, has "a nose for the net and a good shot."

After the game, D'Agostini credited linemate Guillaume Latendresse for setting up his two goals and modestly allowed "I was in the right place at the right time." 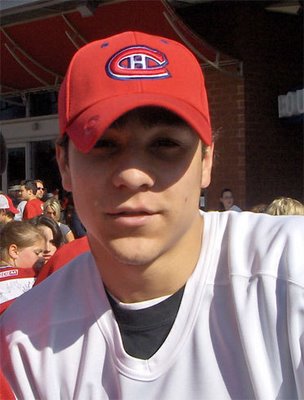 D' Agnostini has been a perenial 20 goal scorer in junior and the AHL, but it sounds as though he could be the kind of special player who can slip through the cracks. Should his NHL game be complete enough to justify a trial stint at the NHL level, he might just be a player who eases the worries of Habs fans fearing the loss of Michael Ryder to unrestricted free agency.

He might also be the player who makes a value such as Ryder expendable, with a return value before he's lost for no return.

Not that I'm on the bandwagon of supporters for Ryder's exit, it's just that Ryder will soon be able to thank impending free agency for over renumerating his one dimensional talent. If that is to be the case, I'd rather it be elsewhere, with the Canadiens shelving out the mega bucks for more complete players. 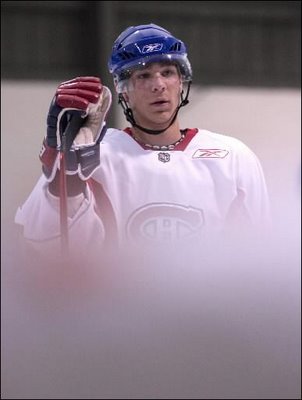 This might be where a player of D' Agnostini's stripe comes in. If he can contribute the same element as Ryder at a cheaper cost, why not give him a full shot?

In the early season, what is there to lose?

Curious to D' Agnostini's fate with the Habs, is that he has rarely been a top line player at previous levels. This might add some balance to the questions concerning him. Does it have to do with size over anything else? Are there other concerns?

I wish I had those answers!

For now, the Canadiens might be well served to play this kid in all rmaining exhibition games in order to sense exactly who they are dealing with. Throw him daringly into a prime time role and gauge his compatability and completeness.

If we have a keeper here - isn't it better to know sooner than later?