Boivin Sees No Margin For Error

Share All sharing options for: Boivin Sees No Margin For Error 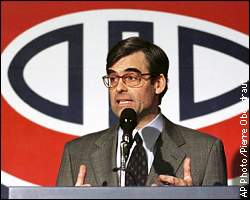 Over the course of the past few season, the Canadiens brass have gotten fans used to the same old line. From rejean Houle to Bob Gainey, and passing through Andre Savard, the goal has been the same - make the playoffs. It now seems that the direction of the team has tossed out the old worn cassette, if one believes team president Pierre Boivin.


Boivin is categorical in his response. It's high time the Candiens aspire to greater heights. A simple playoff showing is no longer good enough.

"Our goals must be focused beyond just getting there. The playoffs are but a starting point. Furthermore, it is unacceptable to miss the playoffs."

Could a disastrous season, as is predicted by the "hockey experts", signify the premature end for the Gainey - Carbonneau duo?

"Bob Gainey and Guy Carbonneau know what it takes to win. They know we are not in a rebuilding mode. They know their responsabilities."

"It is up to them to assure the maximum is brought out of all players and that the team enjoys a season not only nearing the fans expectations, but meeting those of the organization also.

If the Canadiens president hopes to see the Habs play in May, the players must buy into the notion as much. Saku Koivu's clipped quote of two weeks back not only caught Boivin off guard - it shocked him.

" I think it's an opinion based on his disappointments. Saku wants to win the Cup in Montreal. In my opinion, he hasn't had the time to realize the impact of the players we've brought in over the summer months."

Speaking of free agents, for the second summer running, the Canadiens watched their targetted signing slip between their fingers at the last minute.

According to Boivin, the day isn't far off when Montreal becomes a prefered destination as opposed to a questioned one. In fact Boivin states that the process of changing minds is already underway.

"We're going in the right direction. Five or six years ago, we weren't even on the free agents radar screen. Players used us mostly for leveraging deals with other teams. That's not the case anymore."

"In 2006, we were one of two teams in the Shanahan derby. This summer we were a hair's length from signing Briere. When you consider that a player of that stripe get maybe 15 offers...."

It leaves little doubt that the Habs best bargaining chip in these matters involves going a good distance in the playoffs. The team president understands this.

It's up to all concerned to make it happen.