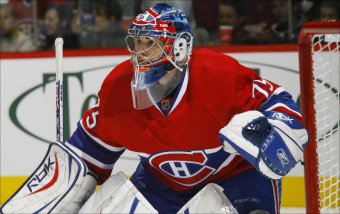 According to a report posted on the RDS site just shortly after noon today, none of the 9 Hamilton Bulldog bound Canadiens prospects were claimed on waivers.

Of course for the Canadiens, this can only be interpreted as a good thing.

The news means neither that the players are unwanted, or that Bob Gainey has assessed these talents for what they are. As all 29 other teams are in the process of trimming their rosters, it goes against the grain that they would add players at this stage.

One poster at Habs Inside Out predicted the likely critcism aimed at Gainey either way.

"If these guys got picked up on waivers, then Gainey gets crucified. If they don't get picked up, well it just proves that our prospects suck!"

What is encouraging about these players making it into Bulldogs jerseys is that it raises the level of inner competition within the Hamilton ranks. Players on the bubble now deem they could still have a slight shot, while the younger players learning alongside them benefit from the experience.

The good news all around is that the core of the championship Bulldogs sqaud remains intact for another run at the Calder Cup.

Adding to the positive take is that there is a solid and strong lineup in place that should show every player in their best light. Should Gainey field inquiries about these players, their values are raised a notch.

When teams do come calling for the likes of Danis, Milroy, Cote, or Locke, they will be more desperate than they would have been today.

A GM has an easier smile when trading from a position of strength, and that is the chair Gainey will find himself sitting in when the cell rings.