Will Reebok Destroy The Habs Jersey Too?

Share All sharing options for: Will Reebok Destroy The Habs Jersey Too? 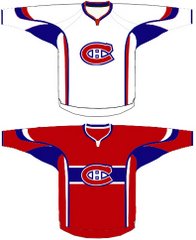 Should I be having a heart attack?

I saw this photochop design on a Habs fan blog, adverstising it as the new Habs Reebok jersey design.

I wanted to retch!

I'm fairly certain - please correct me if I'm wrong - but didn't the Canadiens organization state that the Habs duds would remain unchanged except for the material?

I imagine that the Habs rendered jersey above would likely cause rioting all down St. Catherine street.

I'd prefer a riot be brought on by a Stanley Cup win, personally.

I'm somewhat reassured that the Original Six jerseys won't be drastically altered, after peeks at the Rangers, Bruins, and Red Wings maintaining classic looks. Not sure that Reebok would risk a collective hurl from the hockey hotbeds over these gambles in fashion statement.

I can handle the Senators looking like fairies. No problem there. Deface the Canucks jerseys all they want - 37 years later, fans in Vancouver still can't agree on one particular look. Fudge up the Sabres duds again - who cares?

Just don't bugger with the greatest jersey in all of sports!

Heck, I might even land on common ground with a Leafer on this one. Can you say sacriledge?

I'll be frank, downright, and straight to the point: All these new Reebok NHL streamlined jerseys are butt ugly!

Every single new design looks like a skirt. With thinning vertical lines and armpit shading colors, the entire hockey jersey look has gone to hell.

Why in the world does anyone at the NHL level feel the league needs these puke inducing, girly looking makeovers? They're a joke! 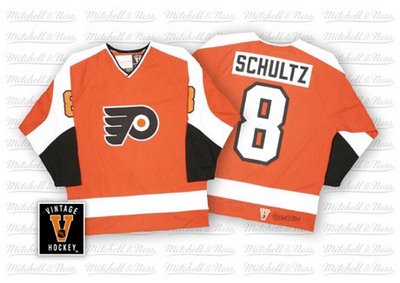 These tight fitting atrocities fit to the form of the players, making them look more muscular. I don't believe that it is worth sacrificing the games sacred emblems, designs and logo's for these vertical streamed disasters. Hockey jerseys are the most treasured jersey in sport. This is not some baseball shirt or flabby basketball muscleshirt the NHL is tampering with, it is the most unique and beautiful paraphernalia in all of sport.

Doesn't anyone get that tradition is important to hockey fans. Buffalo's new Sabreslug pyjama tops don't look any better when Buffalo's winning. They still look out of place. Numbers on the front, for Christsakes! Hockey fans, the game's die hards that are the sports foundation, will be reviled.

The design includes stretchable panels under the arms and will move most jersey designs into a more vertical format. Yuck! 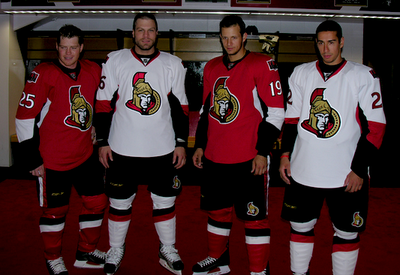 The Reebok claim of improvement is that the jerseys will make the players faster. Right! They suggest that because these pyjama's are water resistant, players will weight less during the course of a game. Of course we all know that if a player is 1.7% lighter, he'll simply fly now, right?

It can't provide a competitive edge - all players will be wearing them - except they'll look like shit!

Brett Hull spoke out on them over the initial unveiling at last year's All - Star game."I think the new sweaters are completely ugly, and I don’t think they should be allowed," he said of the advent of the new jerseys, suggesting it was "One of the reason I quit!"

I can picture the business of throwback and vintage jerseys booming soon after the introduction of these elastic tragedies. Hopefully they go the way of the dreaded Cooperalls, those all-in-one pants combo's worn by the Flyers and Whalers in the early 1980's. Hopefully, they follow the glow puck into the land of forgettable disasters. 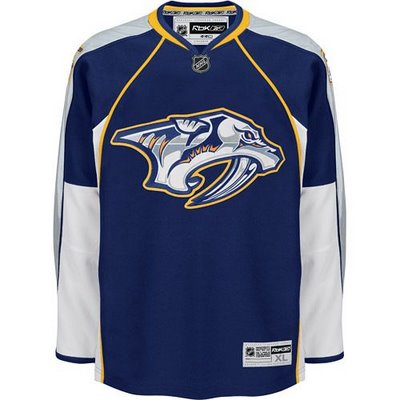 The legendary Canadian book, "The Hockey Sweater", by Roch Carrier, has won literary prizes and cultural awards for capturing the iconic stature that is a hockey sweater.

These new duds are duds! They will never inspire any such devotion.

With the Reebok look, the hockey jersey look is dead.

It seems that the league prefers to cater to the fleeting fan, who thinks angled stripes and vertical bars are just cool.

My prediction is that fans in hockey strongholds will fill arena's with boos. Or continue to fill them less and less. It ought to be an unqualified disaster that won't last more than a season.

Fans should boo them when they see them hanging from the racks in sporting goods stores. When the clerk tells you they are water resistant - piss on them!

I'm getting royally riled that equipement manufactures have gone overboard on the notion they can affect and improve the game. They've sold players on skates and sticks, but are now using this scheme to schmooze the common consumer into ixnaying the game's classic look and slip into these silk socks with arms. 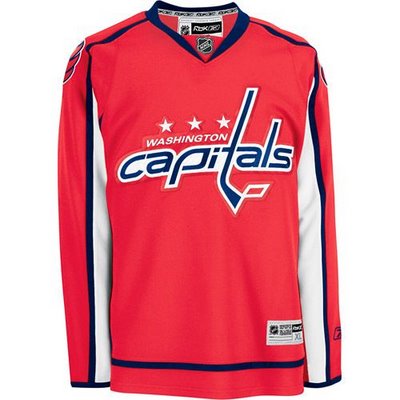 Year in and year out, for some time now, various manufacturers of different pieces of hockey equipement swear up and down that their product will improve the game of hockey and impact players on ice performances.

Now we have this Reebok claim that lighter jerseys, with tighter fitting fabrics, will now make a player skate faster.

Maybe they should have invented skates that makes a player so fast, the jerseys blow dry.

What next, somebody inventing a more accurate puck?

Why do we continue to swallow these overblown pretensions?

Anybody knowing how testing works, surely knows that test results are about as random and dependable as a slanted survey.

My biggest gripe has always been with the one-piece, snap at random, graphite sticks that players en masse have converted to in the last decade. While players love their lightness, their isn't a single statistic that proves to me that the majority of players are shooting pucks any harder with them.

Take last season's All-Star game skills competitions for a random testing ground. Since the rise in popularity of these graphite sticks who can actually attest to having increased power? Zdeno Chara won the hardest shot competition with his reinforced one-piece, netting him a speed of 100.4 mph. Ten years ago, Al McInnis registered the exact same result with a wooden stick.

So, where's the progress? They shatter more cleanly?

Skate technologies have vastly improved the hockey boot, making them firmer and better fitting. While the more comfortable boots translate into better skating because of feel, it can hardly be claimed that it makes a skater any faster. A new blade technology, such as the CT Edge Design, claims to improve speed with a smoother glide and less dig.

Muscles, training and practice, tend to have more profound effects on a player. Testing is a rather dubious and iffy science as it doesn't consider the role that physical improvement plays into results.

With all the supposed advances, isn't it odd to note that in the speed skating competitions at the last decade of All-Star games skills contests, that only three players have had better times than Andy McDonald's 14.03 this past year - yet it is often assumed that today's skaters are much better than years ago. Perhaps Reebok can spin that the players were just wetter years ago.

Skate sharps are a peculiar taste among players, with every player having a prefered technique on demand to team trainers. Many will do it themselves they are so finicky. Give them new blades with slighter flares and they will be filing them whatever way they choose just as they always have.

Does the less dig technology apply to all weights of players, or only the lighter ones?

Will the "no sweat-less-wind-resistant" jersey also make the slow players 8% faster?

There are so many variables in any type of testing, that making large claims can seem dubious, almost misleadingly dishonest.

I never buy into a sales pitch based on on claims. I trust time tested results.

Now where did I put that patent for the velvet cushioned jockstrap? It says here that players wearing them tend to block 53% more shots and have better looking offspring! Women will love them for different reasons!

But don't trust me!