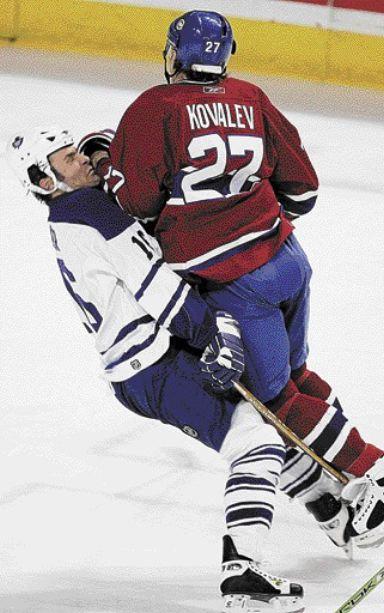 So this post originated via an argument with know-nothing Leaf fan #1967....

The quote from my blue and white bud brained aquaintance that set my blood to boil was...."The Canadiens ( pronounced Canadee N's - like they all do!) have probably traded away a team worthy of winning the Cup!"

Knowing that very few former Habs have left the team to go on and win the Stanley Cup with other squads, a notion was born in my head to compare ex - Habs to today's current team to see how one lineup would measure against the other. I'll get to that shortly. Scroll down past this conversation to get to those comparisons if you wish.

This battle of wits with an unarmed, card carrying Leaf nation member, started out as a verbal joist over which of our teams finished best in 2006-07.

He exclamed "Touche!" upon the meaningless fact that the Leafs finished 9th and the Canadiens were 10th, before I could mention that both teams failed to make the playoffs.

"So take your little extra point in the standings and shine it proudly. What does it give you?"
"Bragging rights!", he states, undaunted.

"Bragging rights to what?" I demanded. "The Habs have won 10 Stanley Cups since the Leafs last won it in '67. Still wanna talk about bragging rights?" 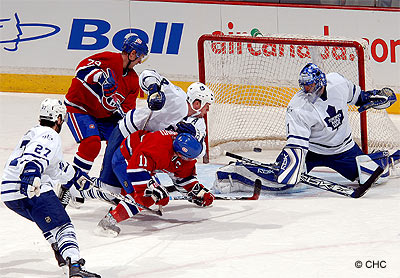 "That's all yesterday", he summised, "It don't matter, the Leafs are Canada's team."

"So we're a nation of losers, right? Like all those Cup wins by Montreal have gained them no allegiances across the country over the years, I suppose?"

"Nope", he defends without a point. "Toronto is the country's biggest city, English is Canada's official language."

"We have two official language my friend, wake up!"

"Leaf Nation is a title Leafs fans have given themselves, buddy. It's for all intents and purposes inexistant. It's a slogan for Christsakes, it doesn't represent a country."

"Still we are Canada's team!" 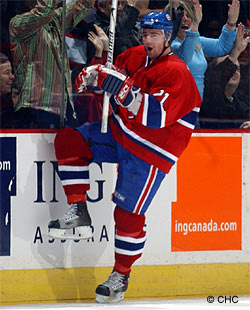 "Flip that five dollar bill over, will you?"

"See those kids playing pond hockey there?" I ask him.

"That kid with number 9 on the jersey, that ain't Lanny McDonald, you know!"

"I know, but Lanny was one of the greatest Leafs ever, never shoulda been traded!", says Leaf Nation man.

"Probably not, but you're missing my point. A Hab, Rocket Richard, an icon, is on the Canadian currency!"

"It could be Lanny! Even if he was traded to Calgary. The Habs traded great players away too, like Patrick Roy. Alot of people probably think that's Lanny on the five dollar bill...who knows?"

This is where Leaf fan states that the Habs traded away a slew of players whose names graced the Stanley Cup. I challenge him to name one other than Roy and he couldn't. I threw in Chris Chelios, Francois Beauchemin, and Jassen Cullimore.

I added that Lanny McDonald was not traded to Calgary, but was dealt to the Colorado Rockies for a player who ended up wearing number 99. This perplexed him totally. I reminded him of Wilf Paiement, who he faintly recalled.

"So what!", he counterded, "could still be Lanny on that bill!"

With that he turns to the elderly lady sitting next to him and asks a question about her husbands prostate cancer.

While I pull pen and pad from my pocket, scribbling madly, I remind myself some things in life are more important than hockey. I start jotting down former Habs regardless.

Once home, I research NHL.com and find 33 former Montreal Canadiens, amongst the players of 29 NHL teams. I choose the best 22 and line them up against the Canadiens current roster.

I doubt the lineup of former Habs would win a Cup, taken together as a team. 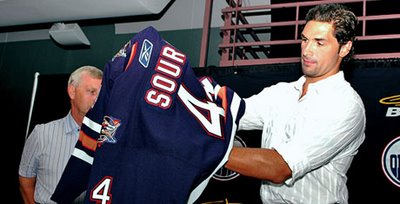 I have noted with asterisks, players who have departed during the Bob Gainey regime. This could be used to rate Gainey's four years of work as Habs GM - see it as you wish. The numbers in brackets are the players salaries in million dollar decimals. The former Habs cap out at 55.5 million.

You be the judge here. Which lineup would you prefer over the next few seasons? 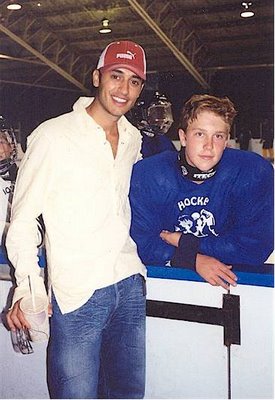 Other former Habs not included in this lineup are defensemen Brett Clark of Colorado, Sean Hill of Minnesota, and Alain Nasreddine of Pittsburgh. Former Habs goalies are Mathieu Garon* of Edmonton, Jocelyn Thibault of Buffalo, and David Aebischer* of Phoenix. Forwards Raitis Ivanans* of Los Angeles and Scott Thornton of Los Angeles, round out the group.