Streit To The Heart

Share All sharing options for: Streit To The Heart 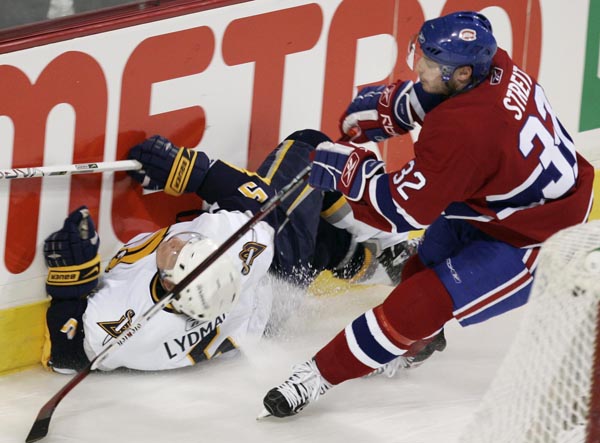 The Canadiens Masterton Trophy nominee for 2006-07 is a bit of a forgotten anomality in Habs scheme of things, just as Roberts was through two decades of quiet role duty and specialty assignments.

In the 1960's and 1970's, Roberts was a key cog for the Habs, rarely in the limelight, but always an essential ingredient to the teams composition. He was a defensive specialist by definition, killing penalties and shutting down opposition lines to great effect. His intuition for positional poise, and his composure in the heat of the action, made him the ideal candidate to fill in on defense when the Canadiens needed depth at the position. Through two tenures with the team, he became the Canadiens man for all seasons, often thriving at being an unfettered thorn in the opposition's sides.

Streit came to the team as a seasoned veteran defenseman with much International experience, and his work ethic soon impressed the Canadiens. As a sixth or seventh defenseman destined to sit out the odd game, Streit worked hard in practice, unsatisfied with a fringe role on the team. Canadiens coach Guy Carbonneau, understanding Streit had much to offer in terms of substancial hockey experience, gave him an opportunity at forward and the player flourished. As a winger subbing on a checking line, or shifted with more offensively gifted forwards, Streit found ways to fit and contribute in either role. Whether playing upfront or back on the blueline, Streit adapted well to both the PP and PK units. 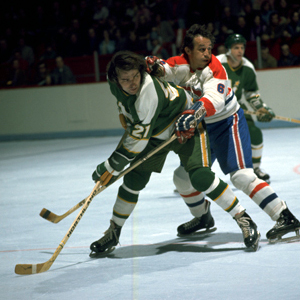 There are curious parallels between Roberts and Streit in the roads they travelled to the NHL and the roles they eagerly took on that enabled them to succeed. While neither would be described as can't miss prospects in their respective era's, both talents are self made players. Doing all it takes to make the team, and doing everything they can to remain there, exemplified both players as leaders in subdued roles. Guys like Roberts and Streit keep other players on their toes through sheer dedication and a team first attitude.

Through the years, the Canadiens have always succeeded by employing a bevy of such gritty and uncompromizing types. Names such as Claude Provost, Brian Skrudland, Claude Larose, and Phil Goyette come to mind as players who gave more than they received in recognition, and could never be heard complaining while their contribution subtly went unoticed.

As many know, Streit's road to the NHL took great perseverance. As a 262nd overall choice in the 2004 Entry Draft, Streit graduated to the NHL as a 28 year old with an interesting resume crossed by long shot odds. As captain of the Swiss National and Olympic teams, Streit had previously journeyed to North American soil, playing for three separate AHL, IHL, and ECHL clubs in a single season in 1999-2000. The downward spiral through the minors did little to dispirit him, and seems to have only helped build his character. Upon returning to his homeland, he dug deep to improve his game and began showing the best of himself when opporunities such as world class tournaments presented themselves. People took notice of the poised Streit, a pillar on several underclassed Switzerland teams. The Canadiens took a flyer on him and have been pleasantly surprised.

Roberts was never the most talented prospect, but was fortunate to come under the tutelage of a young Scotty Bowman with the Peterborough Petes in the late 1950's. He listened intently and learned the inner workings of the game within the game and the lessons served him well.

Roberts gradually climbed the echelons of the Canadiens minor team structure for five seasons, getting closer to his goal in each passing year. From the Petes, he moved on to play with the Montreal Royals, the Hull Ottawa Canadiens, the Cleveland Barons, the Quebec Aces, and the Omaha Knights before getting an NHL break. Throughout his ascention, Roberts was hardly ever a team star, while perfecting his endeavor as a role player par excellence.

Roberts established himself as what Toronto Maple Leafs GM Conn Smythe once described as "a hewer of wood and a hauler of water." Roberts was once termed as being "built like a mooring post for a battleship." Roberts won 5 Stanley Cups with the Canadiens, and appeared in three consecutive finals with St. Louis from 1968 to 1970 with Bowman as his coach. He parlayed his dedication into a long career that led to coaching after his retirement.

Streit shares with Roberts, a similar enthusiam for the dirty work roles of underdogs. Hitting the ice an alert and intense competitor, part of the fun of watching Streit succeed has to do with watching his focused stare burst into a disbelieving grin whenever he or a linemate scores. It is the smile of a player who has surpsrised more than himself in adding up 10 goals and 26 assists, spotting on all four lines.

Coaches from Bowman to Carbonneau and many in between have been fortunate to have warriors to employ the likes of Roberts and Streit, who throught time tested perseverance understand their roles and worth. A vital ingredient on every winning team, having them around makes a coaches job easier.