Share All sharing options for: Souray - Bittersweet And Bitter Fingers 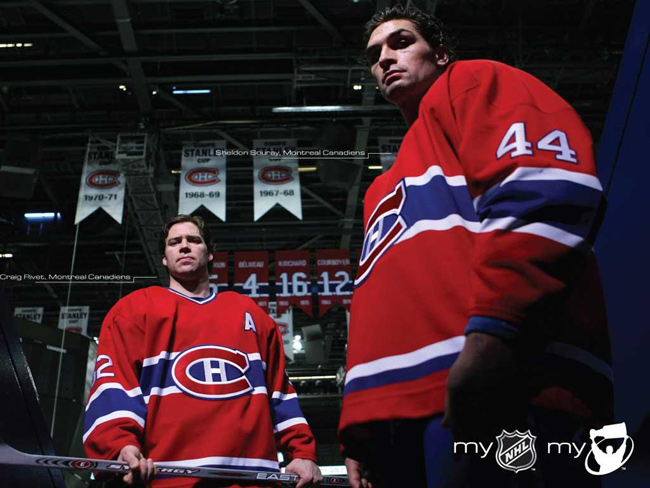 (This post is dedicated to Habs fans such as myself, and Dave Stubbs included, who I assume are still perplexed as to why Souray is an Oiler.)

Sheldon Souray was my favorite Montreal Canadien. He will continue to be a player I will cheer for regardless of jersey colors, for now at least.

My respect for Souray went beyond his game. He is a team first guy in all senses of the word. He's overcome left field adversities with class, composure and dedication in his career. He is what the french press in Montreal like to call "Un Des Vrais!"

I have to admit, I was pretty devastated, but not altogether surprised, when Souray failed to resign with the Montreal Canadiens this past off season.

Free agency often exposes the core of a players true soul being. It's often a one-time, career year based opportunity that players and agents alike do not want to mess up.

There are two bottom lines that come into play - dollars and happiness.

Chris Phillips of the Ottawa Senators gained fan respect league wide for being able to differentiate love over gold. In signing for less than his market value to remain a Senator, he made the ultimate team statement and committment, and enabled his team to move forward with him part of it, rather than look to greener pastures.

Some players like home runs to land in the upper deck, others are happy just to clear the fence.
Watching the Habs and Souray negotiate, from the outside, I kept waiting to see which of the two parties would allow a little water in their wine, enabling a deal to get done.

I saw this happening in one of two ways.

Souray, knowing the team had stood by him through the thick and thin of injuries, a brutal and very public marital mess, and some questions regarding his overall game, would say something akin to, "It's the Canadiens patience and belief in me that allowed me to develop into the player I've become. They've stood by me. This is home, and accepting a little less money doesn't faze me. I'm happy to be coming back."

Habs GM Bob Gainey, on the other hand, might have pursued Souray more relentlessly, while recognizing the players pride at becoming who he is. Unknown to us fans, he may or may not have said, "Sheldon, all through this process, you have never stopped being a team guy. We believe we have supported you well. You've never demanded a trade, while continuing to put out for us. We recognize your committment, and we are prepared to compensate you for all that you are by making you a priority for us. Let's talk!"

Hindsight is always a 20/20 proposition. Gainey would have had Souray in the fold had he not been sold on having to tend to Andrei Markov's contract first. He underestimated Souray's pride.

Unthinkable, considering the player wore his heart on his sleeve.

Gainey could have opted to settle Markov's contract, only to announce it later, while continuing on to negotiate with Souray. Instead, Gainey lowballed the player, and misread the demand for him on the open marketplace. GM's usually have a pulse on how the remainder of the league evaluates certain talents, and Gainey banked on his knowledge that no other team was likely to be willing to renumerate Souray better than the Habs in light of his defensive misgivings.

It was a gamble that almost paid off for Gainey, had it not been for one desperate GM in Kevin Lowe, needing to save face after being shunned and ridiculed. Many teams passed on Souray, while the Canadiens offers were fair - nothing more, nothing less.

The lesson might well be to beware of renegade GM's, of which the NHL has more and more of.
I'm disappointed in both Souray and Gainey, for not letting a little water seep into the wine in order to get a deal done.

In Dave Stubbs excellent column published today, Souray suggests that his negotiation with the Habs took on a different route than the one he saw playing out. While he suggests no ill feelings remain towards the Canadiens organization, it's hard not to see little pinkies pointing to Souray's disappointment with Gainey and the team during negotiations.

Souray sounds happy to be an Edmonton Oiler, but the veiled blame and disguised settling of scores first, points to an undercurrent of bitterness, though Souray attempts to spin it otherwise.

When Souray signed the Oilers deal, he hinted that the Habs had made a late 11th hour offer. He doesn't revisit the quote in the Stubbs piece.

The whirlwind experience of free agency likely has Souray wondering, "How the hell did I end up here?" 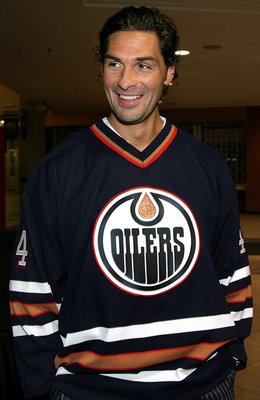 No one including Souray himself, likely saw Edmonton as a probable destination when this process began. It was, hence, a renegade GM to Souray's rescue. Kevin Lowe and Sheldon Souray both saved face with this deal. The question remains as to whether their off ice harmony begets on ice success.

For now, I can't help but think that both Souray and Gainey blew this one - together. I place the emphasis on the player, who has an agent and the benefit of choice, in this most uncompromising of times.

Comments that begin with, "We never heard back from the team" are seldom responded with "We called often and were greeted with deaf ears".

Both parties wanted and needed each other. Neither would admit it, with dollars compromising needs. It's a shame.

More than any other player leaving the Habs, the Souray defection cuts a little deeper than most. It doesn't sting any less with the revalations from the Stubbs article. The "It's Business" quote from Souray makes me roll my eyes skyward.

My answer is, if you want happiness, make your heart your business! If making no one else happy but yourself - good luck!

Drowning my sorrows in music, a longstanding foolproof fallout shelter for myself, has always given me perspective. With the Habs being one of the great loves of my life, I realize that there ain't no one broken hearted love song at the ready to provide cure and solace. So, I look towards understanding.

Rocker Bruce Springteen opened his 2002 disc, "The Rising" with a song called "Lonesome Day". The 9/11 inspired disc dealt with sadness and loss, with a little misguided retribution thrown in to bring it down to a basic emotional human scale. The uptempo "rise above it all" nature of the lyric and music offers more questions than answers, while butting heads with the relationship mysteries of life.

Oddly, it was the song ringing in my ears, between the car CD player and the home, when I came inside to discover the news that Sheldon had become an Oiler.

The lyric begins with an unfolding mystery:

"Baby, once I thought I knew
Everything I needed to know about you
Your sweet whispers, your tender touch
But I didn't really know that much
Joke's on me, but I'm gonna be okay
As long as I can get throught
This lonesome day"

The third verse kind of summed up how I felt in the instant Sheldon signed with the Oilers:

"Better ask questions before you shoot,
Deceit and betrayal's a bitter fruit,
It's hard to swallow come time to pay,
The taste on your tongue don't easily slip away.
Let kingdom come,
I'm gonna find my way,
Through this lonesome day."

While it's been mentioned the verse is an analogy for procreational abstinance, misplaced in song, Springsteen likely intended it as representing a lack of U.S. government forethought when it comes time to drop bombs.

Either way, it captures pretty well how I felt on the lonesome day Souray signed in Edmonton.

The bottom line is, much of what happens in life, is beyond our control. We still must learn, through survival instincts, to deal with it, regardless. Hockey players and fans alike.

Most Habs fans have moved on already, placing Souray in the "I've heard all those spins before" category. Money talk will do that to heart strings - just like it does in the worst of divorce cases. Hockey fans aren't at all unlike a spurned love interest. Regrets come later.

Nowhere in Souray's quotes does the player mention what he did to bridge the gap during negotiations. Players and agents and GM's are all compromised in the free agency process.
Playing a hand often leads to exposing costly needs. Emotions come as an afterthought - hence the Stubbs article and Souray's need to plead his case upon being questioned.

Both Souray and Gainey put up fronts they could not back down from once initiated in this dealing. Much was on the line in this scenario - reputations were at stake.

Gainey will not comment. He will let his actions speak.

We fans, are caught in the middle.

I go to great lengths to remove myself from this connundrum, but fail miserably.

I still wish Souray was a Hab.

What agitates me most, is that I get the feeling that Sheldon, while pointing sublte but yet bitter fingers, wishes he was still a Montreal Canadien also.

Listening to "Lonesome Day" over and over, there is still no resolve.

Sheldon, it's never too late to come home again!