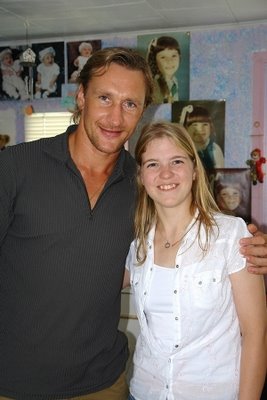 (Robert L. Note: If you were wondering just what Alex Kovalev was up to last week in Grande-Riviere, here is the full story from Sovetsky Sports. Of course, you may have heard about his little motorcycle scrape up, but it is this story that should have made headlines. The Sovetsky piece has a very incoherant translation. In the name of good English, I have archived the piece here, rewriting it in the third person, keeping pictures and all. Thanks to JT for the tip!)

Any longtime regular reader of this site would know that I am hardly Alex Kovalev's number one fan.

This post concerns the fan who is Kovalev's biggest fan.

In the past, I have often qualified Kovalev as enigmatic. That has always been the most generous positive term I could use to describe the player who I saw as both maddingly talented and glassly disconnected from his surroundings and perceptions.

I assume that I am not alone in saying that he is a difficult player to assess and a hard person to get a good read on. Habs fans have seen Kovalev both floor the accelerator and jam the clutch pedal in his three years as a Montreal Canadien.

While most players actions speak louder than their words, Kovalev has in the past, shown the opposite of this notion. Over this past season, number 27's words have been headlines while his game in 2006-07 rarely screamed as loud. Two published rants in Sovetsky Sport had Kovalev criticizing the Canadiens and each one greatly diminished the public's opinion of him.

This offseason, some Habs fans wished to see Kovalev playing out his own private Siberia as a bought out player toiling overseas. Diehard Canadiens fans squirmed while both GM Gainey and coach Carbonneau bent over hindwards to grip the Kovalev connundrum and make nice with their disgruntled star.

The expectations for Kovalev in 2007-08, hence, were grim. A clean slate would do him well.

Always an interesting personality off the ice, on the whole Kovalev is perceived as moody and misunderstood. With his image in need of a bold PR stroke, comes this story by Genadi Boguslavski (I'm not making it up!) from Russian Hockey Digest. It could be just the boost his image needs.

It is the story of one fan's love for Kovalev, and what the player did to reward her dedication.

It's not often one sees a player go to such lengths to fullfill a fans dreams. Reading it has upped Kovalev esteem in my eyes - his slate is cleaner. One hopes his on ice focus will be as dedicated.

In March of 2007, Sovetsky Sport published an article how Alexei Kovalev invited his fan Jocelle Cauvier, a girl from the small northern Quebec town of Grande-Riviere, to an NHL game in Montreal. The trip was a highlight of the girl and her family’s lives. Before the family left Montreal, Cauvier invited Kovalev to come over to her place in Grande-Riviere and Alexei accepted the invitation! 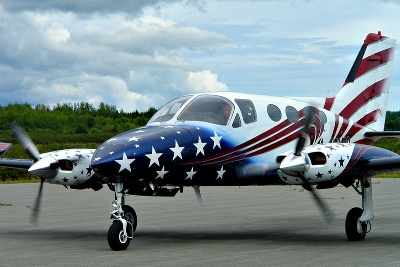 "My Cessna was built in 1971", Kovalev says, "For more than half of its lifetime this plane flew in Europe, and then, was transported via Iceland and Greenland to the US. I bought it for $250,000."It takes Kovalev and crew extra time to search for information about the airport in Grande-Riviere.

"It is very important to know where you are flying to", Alexei explains. "If an airport is small, a pilot should know if runway is long enough and in what conditions it is. Besides, just in case, it is good to know where is closest airport located for emergency landing." Before taking off, Kovalev makes an inspection with a mechanic, tunes up devices, and only after everything checks out are they ready to fly. As soon as the plane is up in the air, Boguslavski enters the cabin and sits down in empty second pilot’s seat next to Alexei.

Kovalev is communicating with on land dispatchers. First, they are in Montreal’s zone, later they spoke with the Quebec airport controllers.

"144 Delta, got it, opening a direction", comes the reply. The dispatcher dictates numbers and letters, indicating the quandrants. Pilot Kovalev enters them into the GPS database. On a small dark monitor, a pink line immediately highlights the direction from Montreal all the way to a small airport in Grande-Riviere.

During a flight, it is crucial not to be shy to ask the dispatcher if something is not clear. It is his responsibility to patiently explain the situation as many times as needed. Everybody understands how this is important while you are in the sky. The dispatcher clears open a direction, and from this moment on, you are on his radar. As soon as the flight is over, the plan closes. If for some reason you do not reply to him, dispatcher must raise alert. The dispatcher also warns about weather changes during a flight.

Excitingly, Kovalev keeps tells how comfortable it is to fly on a plane.

"It gives a feeling of incomparable freedom. Sit down at pilot’s seat, spin propellers, and you are alone with the sky". Finally, the plane reaches its altitude. A beautiful northern landscape is laid below the plane. To the right all the way across the horizon is the Atlantic Ocean. On the left there are small lakes and woods, that reminds Boguslavski of a disheveled haircut of a man who woke up at five in the morning.

It begins to rain.

"Time to turn on windshield wipers", Kovalev is kidding! 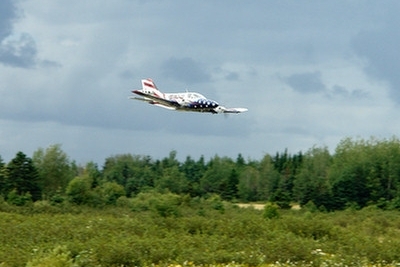 The Aerodrome’s runway is now ahead. Alexei flies over it, verifying that everything is OK. At this moment the pilot notices a large crowd of people below, waiting to greet them. Everyone is waving their hands and Kovalev responds by shaking the Cessna’s wings before he makes another lap and then lands.

Kovalev exits the plane, and is greeted with exhuberant applause worthy of the first astronaut returning from orbit. The gathered crowd is thrilled. All of Jocelle Cauvier’s family is wearing Kovalev’s jerseys - Ak Bars, Montreal, Pittsburgh. 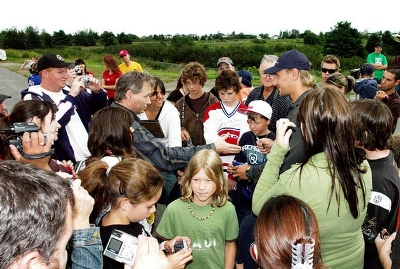 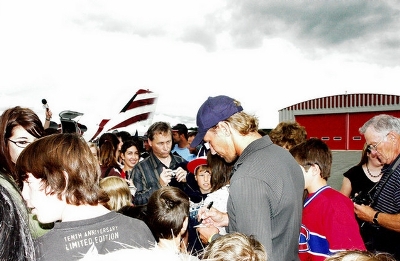 The mayor of Grande-Riviere, Romuel Boutin greets Alexei, shakes his hand, and attaches a badge on Kovalev’s shirt, announcing Kovalev as an honorable citizen of town. Alexei spends much time signing autographs standing right there on the runway. People are squeezing, elbowing each other trying to take pictures with Montreal’s star. Some kids are climbing over the plane, pulling Boguslavski's sleeve to ask if Alex is going to give them rides.

The rain speeds up Kovalev’s impromtu autograph session and everyone heads inside the airport where Alexei signs a book for honorable guests.

They are given a rental car, and they proceed to Jocelle’s home. 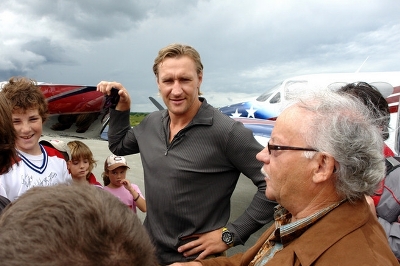 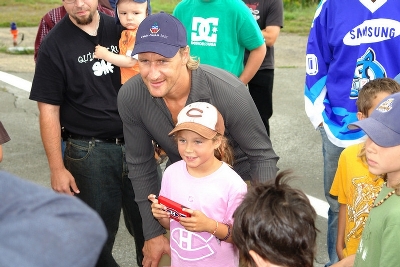 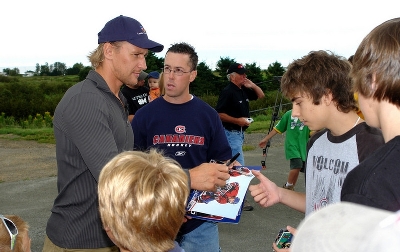 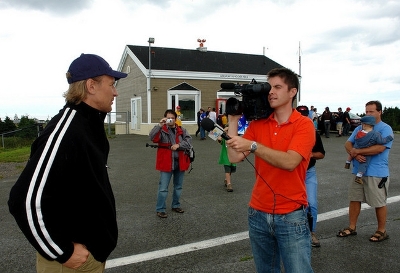 Without even knowing directions to Cauvelle's home, it is not hard to spot with the Russian flag fluttering on the roof. Boguslavski remarks that he is surprised not to see the red, white and blue of the Canadiens waving in the wind, considering that they are in the far north of province Quebec. They ask where the flag came from.

"I went to Montreal especially to get one", Jocelle says. "I bought it in one store that sells Russian souvenirs."

Surprises continue inside the house where Kovalev’s fan has decorated one of the rooms into AK-27 museum. Boguslavski has visited an exposition in Kovalev’s father’s home in Togliatti, and a museum that Mikhail Ovechkin has created for Alexander. This display in Grande-Riviere is impressive!

There are photographs, pucks, jerseys, and articles from Sovetsky Sport. There is even the Russian national anthem’s words and accords are hanging on the wall!

Does Jocelle really sing it every morning at six?

Alexei Kovalev in his fan made museum 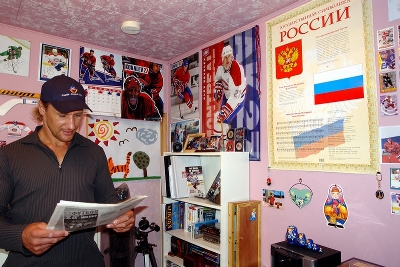 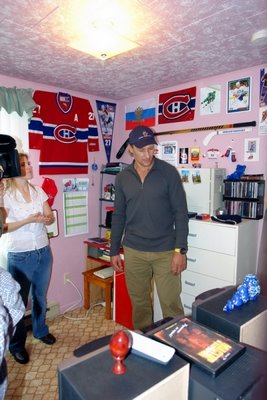 "After Sovetsky Sport published the article about my meeting with Kovalev in Montreal and gave my email address, I keep receiving tons of messages from Russia", Cauvier says emotionally. "Fans from all over Russia are communicating with me. They even send me Sovetsky Sport’s editions. Also, I read the newspaper on the internet using an electronic translator. I don’t speak Russian yet, but I'm taking lessons with a teacher." "I would learn Russian only because Alex speaks it."

Kovalev enters the fan shrine, startling everyone with a loud whistle. Noticing, that Jocelle’s collection is missing Lada’s jersey, Alexei promises to bring one over next time.

Numerous relatives are in the house, and everyone would like to take a picture with Kovalev.

"It's unbelievable that you are in Grande-Riviere. We can’t believe it!", says one relation.

Boguslavski says that if Canadians weren't so polite, they would definitely pinch Alexei to confirm this is not a dream! 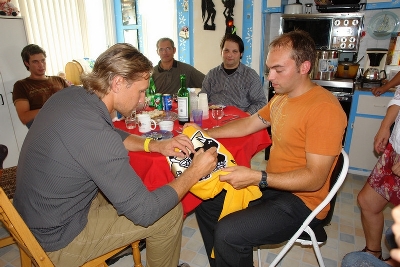 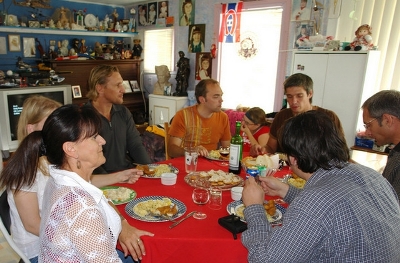 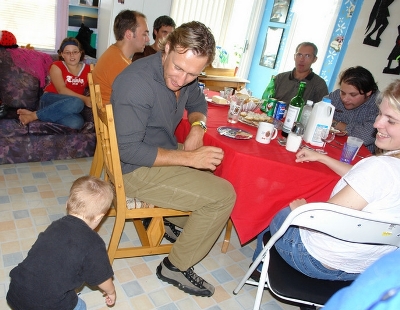 Accompanied by Cauvier’s family, everyone heads down to the pier where they will soon make their way out to the ocean to watch the blue whales. This is a seasonal ritual for the locals and tourists make a pilgrimage each August to view the sight of the giant mammals.

The vessel "Zodiac" takes the crew 30 kilometers out from the coast. The trip is not for nervous people as the Atlantic is a little stormy. In their orange suits, every looks like American astronauts and it reminds the writer of Bruce Willis in "Armageddon". 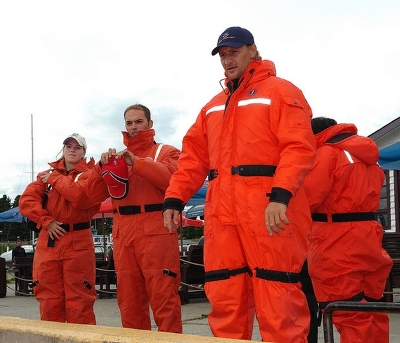 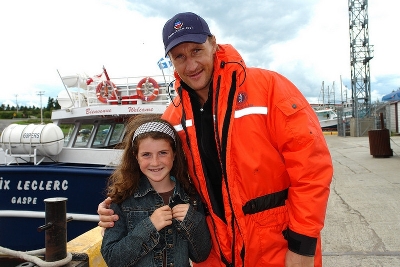 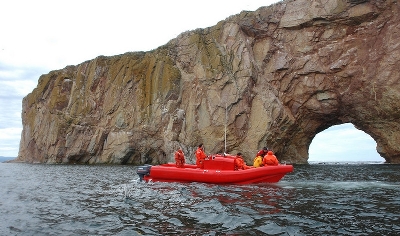 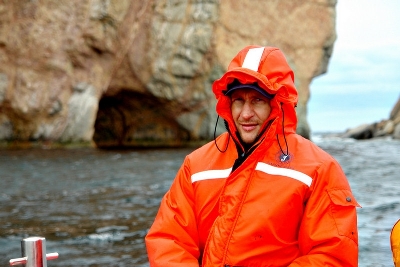 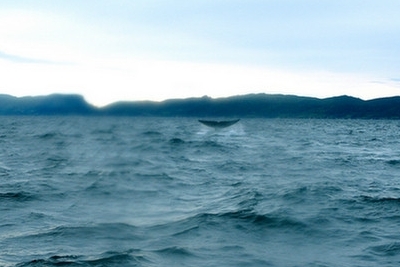 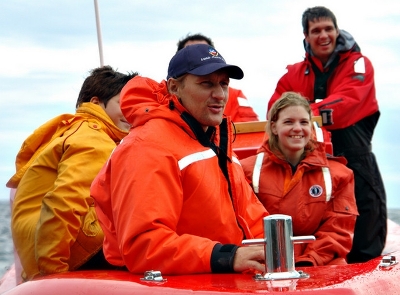 Jumping from wave to wave and poured over with salt water, the crew passes the famous Perce Rock on the way out to the ocean. After we reaching their destination, everybody peers into the distance until the typical fountain spray of the whales appears above the water. The Zodiac speeds out in the direction of the sprays.

Right in front of the boat, the mighty body of a whale loudly sweeps across. Everybody is shouting and again waiting for fountain to spray. The expedition continues for a few more hours and everyone returns to the pier by evening time.

Later that night everyone gathers at the Cauvier home once again. More well - wishers stop by before Kovalev and Boguslavski head back to the Aerodrome. Despite the darkness, Grande-Riviere’s residents are still lining up for Kovalev photographs and autographs. The pair remark how unbelievable it is that there are so many Kovalev’s fans in one small Canadian town? 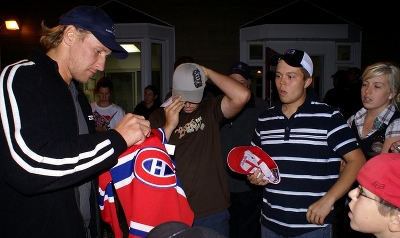 Before the plane takes off, Alexei invites Jocelle and her family to return to Montreal in the upcoming season and he promises to visit Grande-Riviere again next summer.

The Cessna takes off and the crowd gathered at the Aerodome wave goodbye.

In the air, Kovalev is talking, still caught up in the day's events.

"You know, every time 20 thousand people come to the Bell Center for the Canadiens games. But what I saw today is incredible. Indeed, this is the kind of people whom we’re playing hockey for!" 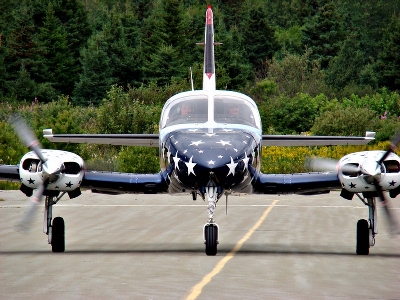