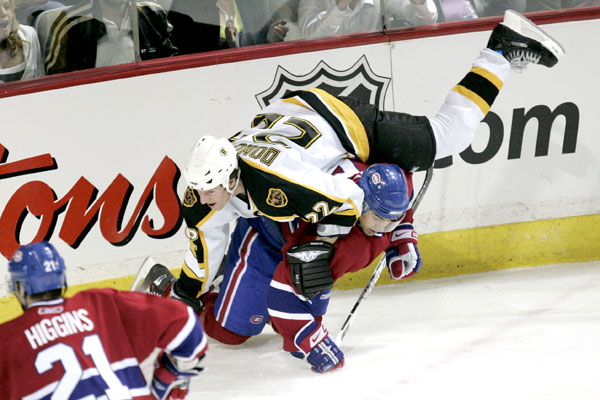 The title might seem harsh, but the truth is tough teams win Cups.

With that fact in mind, the Canadiens do need an identity makeover, to some extent. Not an overhaul, mind you, but the Habs need to get mean - especially at the Bell Centre.

The are several Canadiens players who need to adopt the attitude that the playoffs start in October, and they should begin early to establish a reputation that the Bell is no longer a place for a Sunday afternoon stroll.

The grittier core of the Habs lineup need to expose tooth and fang to deliver this message, and several Canadiens players have the goods and emotional game makeup to accomplish the notion.

It would go a long way towards improving their 5 on 5 play, a longstanding Canadiens achilles heel, and undo the reputation that the team plays small.

It's time to lower the boom on the opposition and keep them looking over their shoulders, and they need to develop the habit of all doing it together at once in the same game!

Everybody needs to get taller on this team, and an all for one attitude is the best place to start.

When every player covers a teammates back, a more confident lineup rapidly emerges.

Currently, no player on the Canadiens roster, could be described as a policeman, of sorts.

Now the team doesn't require an all out, headhunting goon. For all intents and purposes, they've gone the way of the dinosaur in the almost New NHL. Most recently, the Canadiens employed Garth Murray and Aaron Downey to laughable results, leaving only Sheldon Souray to stick up for teammates. But I digress, my point is no so much about fighting and the need for Chris Nilan types, it is just that the type of game they need to bring on will require some backup.

Getting down and dirty and making every inch of the boards seem like corners is what they must get busy at. No more Mr. Nice Guy! 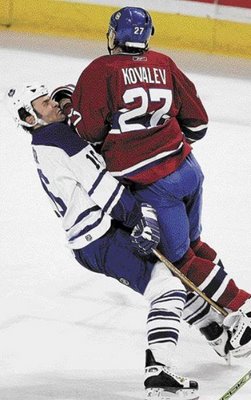 There are seven players on the Canadiens who already bring certain elements of this type of grit to the ice nightly. They are Mike Komisarek, Chris Higgins, Guillaume Latendresse, Maxim Lapierre, Steve Begin, Francis Bouillon, and captain Saku Koivu. They lead here, where others (read mostly Europeans and Russians) follow.

While the players mentioned above sometimes set the tone, it is a wavering decibel that needs cranking. They need to play to their roles without missing a beat, skipping a hit, and delivering a message.

Mike Komisarek, the Canadiens leader in hits last season serves as an excellent example of the dedication such a role requires. He seemed on a mission to make a name for himself in 2006-07 and he succeeded.An unattentive forward doesn't want to get slightly distracted around him. It's heads up time when Komisarek is on the ice, and no one turns their back to him. I see Scott Stevens type crunches in Komi's future. Learning to drop the gloves more often would go along way in sealing a reputation as a player not to be messed with. He can take on the team policeman role left vacant by Souray and add to it.

With Chris Higgins having become something of a goalscorer, he may become too slick for his own good - or that of his own team's. Much like Michael Ryder, Higgins has been seen turning away from a solid opportunity to smash headlong into an opponant in order to preserve a scoring chance. The follow - through on the hit needs to become the habit. The unselflish creating of a scoring chances for linemates by applying those hits is the shortcut to better offense. When opponants become aware they will not get slammed hard they become braver and more daring with the puck. All Habs would be served to employ this attitude and Higgins has just the mental fortitude and leadership capabilities to show the way. We have only gotten small glimpses in what has essentially been two half seasons of what Higgins is able to accomplish. A healthy Higgins during 80 games will create a whole new dimension to his upside. 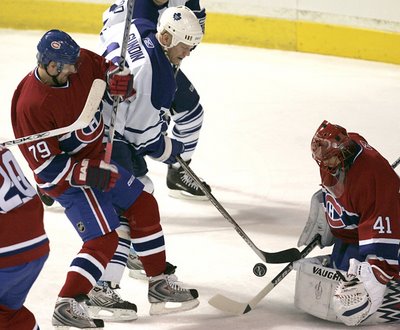 Latendresse is a hitter with tremendous size and upper body strength. When he uses it best, it keys him into games immediatly. He is the type of player, who, once he matures, will be sent out to start games and set the tempo. His maturity has been his best asset so far, and he seems willing to do what the coaching staff asks of him. When his game rounds out, he will bruise opponants with clean hits. He more than any other player in the Bell, can rouse a crowd with a devastating body crunch. Should the seemingly passive Latendresse ever bring on a mean streak, he will be fearsome to say the least. I believe that once he finds regular linemates, his complete game will blossom. An angered and passionate Latendresse will cause a premature pass or puck dump everytime. His developement is key to the Canadiens future hopes.

Maxim Lapierre served notice that he can be an indiscreet and irritating little bugger within a few matches last season. First he dumps Sidney Crosby on his keister off the opening faceoff with a shove from the butt end of his stick and days later he gets a trifle too close for Ray Emery's comfort, rattling his cage on a close in play. Both coy ploys had NHLer's wondering just who does this Lapierre kid think he is? He is a player, capable of decent numbers, but in a specialty role. He'll be sent onto the ice to either get players off the ice or off their game. The good news in Lapierre's case, is that he already understands that this is his meal ticket to remaining in the NHL. Without this edge, he's a fringe player. With his rats demeanor, he is an irreplacable componant in wining key games. 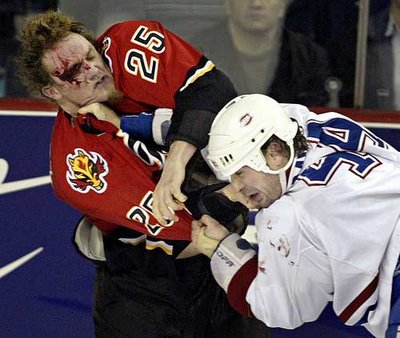 Steve Begin is the Habs purple heart warrior. A career fourth liner, Begin defines the term sparkplug. Need someone to drop the gloves in defense of a teammates - Begin's your man. Blocking shots - no problem. Throwing out that big first hit to set the tempo of a game early - Begin is the master. People tend to forget that Begin was an AHL playoff MVP just a few years back. Begin hasn't forgotten what his calling card is, and he brings adreneline to every shift. A captain without a letter, he will accomplish his role injured or not. File his under "inspiration".

On defence, Francis Bouillon is the Habs face wash specialist. Along the boards, Bouillon uses this grease and grime etiquette to slow down adversaries and pin them out of the play. His strength and the leverage his shorter stature provides are a decoyed invitation into a bumpy ride for those who underestimate him. As with Begin, Bouillon is often forgotten in the mix, and needs shift to shift consistency. Rather than pumping up for the big hits that garner cheers from the Bell Centre crowds, Bouillon needs to learn that sometimes quantity overrules qualities. Hitting more often would be advised.

On International Ice, Saku Koivu's temperment undergoes a bristling transition as he deploys no shortage of illegalities to his gain. Subtle jabs and slashes, higher sticks and elbows seem to turn him into a Finnish version of a win at all costs Bobby Clarke. While a certainly a much nicer guy off the ice, Koivu would really start fires if he brought his playoff temperment along for the regular season more often at the right times. What Koivu needs to be taught is how to reel it in some, and oddly, when to spare the effort. Oftentimes, Koivu is a spent player by the third period due to his emptying the tank too soon. He needs to be a more patient performer in the first and second periods as he is lined up against other teams top forwards. More energetic wingers would help his line become more challenging in 5 on 5 situations, but Koivu is also tasked with leadership duties and restreint has rarely been his friend. Last season, the Habs were the NHL's best 3rd period team - often with Koivu leading the way. 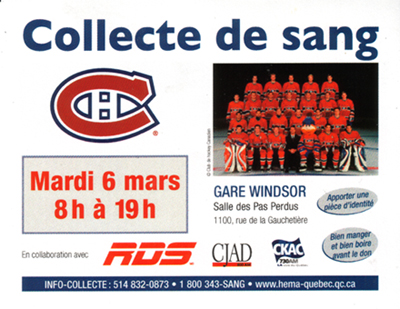 It remains to be seen how Brian Smolinski and Tom Kostopoulos fit into the scheme of things.

While by all accounts Smolinski is a solid vet, the word on Kostopoulos is that he is of the Lapierre grain. To that I say, let the sparks fly!

Outside of these players, remain the European componants of the team. If the players in charge of lighting the fuse work to effect, others will follow, including the teams more subtle elements - it's inevitable.

Watch the way Alex Kovalev plays when he's absolutely pissed off and out for vengance!

Lying in the balance of an enlivened Habs team, is the question of discpline on a team whose coach's reputation garnered them more penalty minutes than they deserved last season. Fringe calls against them, were often blamed on the coaches mouth and smirk, and rightly so in my opinion.

Should Carbonneau's team play the role of hell raising devils, it will be up to the coach the adapt a "what just happened" poker face!

In short, the coaches demeanor will have a lot to do with whether the Habs can become the meaner team they need to be under his guidance. He has to convince them that they could win this way, while being able to hold up his end of the bargain by chilling out behind the bench. Not everything he says, needs to be for the referees ears.

With the Canadiens being a work in progress, toughness is a way to go. Can the coach be a disciplined accomplice?