Can Patrice Brisebois reprise the role of Noel Price?

Share All sharing options for: Can Patrice Brisebois reprise the role of Noel Price? 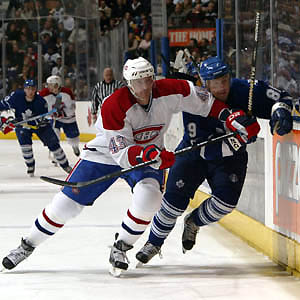 Talk of Patrice Brisebois returning as a Montreal Canadiens has ignited much lively discussion of late. As news has it, an offer from the defenseman sits on Bob Gainey's desk.

I didn't initially like the idea, but I'm warming to it. Seemingly nonsensical at first thought, I think I may have figured this thing out. Finally! Maybe!

While the Habs GM ponders the move that would see the 13-year Habs vet back in the lineup as a sixth blueliner, spare part, or tutor to the team's younger D-men, fans have been pointing to other former Habs who returned from glory years to not so heroic homecomings.

Looking over the names of Habs who've come back for more pie, you must skip through and eliminate those who have gotten but a taste of crow.

I have found that often the result for the returning player (and fans) ends up being nothing more than a ceremonial duty tour for the first few games back. At least until everyone including management realizes why they player had been gotten rid of in the first place.

In the Canadiens long history, I have found 20 such players (there might be a few more I missed) who have returned to the team, to varying degrees of success. I have listed the more prominent ones below in reverse chronological order, and it can be seen that rare are the occasions where a player has returned improved and been worth the while. 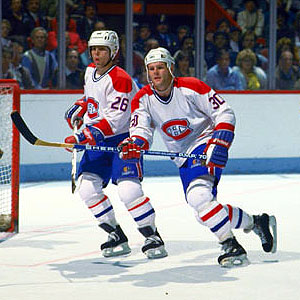 * Did not play for the Canadiens upon return

In the Brisebois case, no one's expecting a rebirth (define that anyway you choose!) of any kind, but a certain respectability would be expected at any price.

If it is gnawing at your cranium that Gainey has a particular idea in mind — one you cannot put a finger on or comprehend at first glance — you aren't alone.

There is always a lesson to be learned from history, I have learned. Especially when it comes to the Habs. So off I went searching for that notion amidst the second-time-arounders in Hab history.

Of the names above, only Rejean Houle and Oleg Petrov returned to find better days, relatively speaking of course; each shared meager beginnings. Both Shayne Corson, for a short spell, and Stephane Richer showed flashes of their former selves. You could be excused for missing it if you blinked!

Stephane Quintal had good years left in him upon his return, and was a serviceable battler for the Habs a second time. Ditto for Gaston Gingras, confidently improved by a few years away from the pressure cooker. Only free agent ludicrousness pulled Quintal away from Montreal in the first place.

Brisebois is too long in the tooth to fit into either of those scenarios, so there is not much of a lesson to be found here.

Two successful repatriations were Claude Larose and Jim Roberts, both rock solid defensive specialists who returned as consistent as they left. Each were missed contributors to past Stanley Cups, and therefore vital to the team's composition despite their non-spotlight roles.

Brisebois was barely becoming a regular when he was part of the 1992-93 Stanley Cup champions.

Unlike Petrov, other reclamation projects named Jim Cambell and Alfie Turcotte weren't even worthy of the afterthought. Again, no resemblance to the Brisebois situation.

Several returnees were of the spare part variety, filling different roles from playing on the farm to becoming the future considerations in their own trades. These return deals are often a case of "having" to take on a contract, rather than "wanting" the player's return. A few (Steve Shutt, Claude Provost, Chris Nilan) simply wished to retire as Montreal Canadiens, and had their wishes fulfilled by good-hearted GMs.

In the Habs earliest years, Howie Morenz (ceremonial), George Hainsworth (injury replacement), and Newsy Lalonde (bucks, more bucks and even better bucks) made return appearances. Of the three, only Lalonde was in his prime, returning after his first and third pro years, after following the lure of the mighty dollar to Renfrew and the West coast.

Perhaps the imminent return of Brisebois mirrors best that of defenseman Noel Price, who played for the Canadiens from 1965 to 1967.

One can be excused for not remembering the sturdy and dependable rearguard, whose best qualities had everything to do with his ability to teach and reach younger players (he was before my time, but I read and learn!). Not only was Price highly thought of for his player traits as a stay-at-home blueliner, his off ice habits were also in high regard.

Price taught kids to be men, taught them proper eating and rest habits, stayed in exemplary shape himself, and ship-shaped a raggedy-ass D corps into league leaders quickly with his wise advise and teachings. He was revered overnight for his insights. 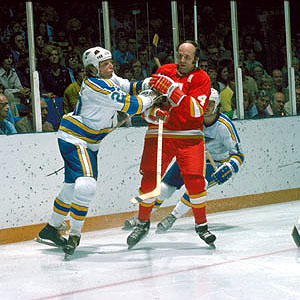 Twice after 1967, the Canadiens sought Price's services. The inexperienced 1971-72 Nova Scotia Voyageurs were the first beneficiaries of Price's good hand with kids as he helped straighten out a club going nowhere fast into Calder Cup champions. Brought back almost strictly to tutor Larry Robinson, it could be said the Habs owned him a debt of gratitude for years.

The favour was repaid to Price, who found the NHL once again at age 36, a gift trade from the Habs to Price and the expansion Atlanta Flames. There until he was 40, the Canadiens snapped him up once again, and he worked his wizardry in Nova Scotia on such future NHLers as Brian Engblom, Bill Nyrop, Rick Chartraw, and Gilles Lupien. Price led them all in scoring with 39 points in 73 games.

Now should Brisebois play a similar role to Price, that of AHL guru to the likes of Ryan O'Byrne, Jean-Philippe Cote, and Mathieu Carle, it might just be one of the more brilliant moves Gainey makes.

Time will tell if Brisebois is able and willing, and buys into such notions.