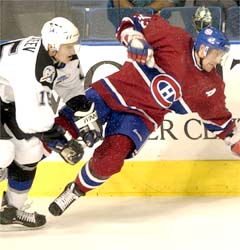 I dreaded having to write this post - trust me!

My IP crashed last evening, so I liken this to waking up next to that unattractive stranger of a hundred unfunny jokes and worst-case nightmares, wondering just what let my standards sink so low.

So, yikes, it's Patrice Brisebois - round duh!

Why couldn't the Habs have brought back Schneider, Beauchemin, or even Brett Clark for Godsakes.

I've tried examining the cons and pros since this matter became rumour for fodder, and have rested terribly uncomfortable even with my most positive of spins.

I just couldn't grasp liking it in the best of scenarios, even with Brisebois a Hamilton-bound defensive tutor.

Judging by the Habs press release, old 43 has a lock as D-man #6 - so let the cold sweats begin!

Never have I cheered for a Habs player to be as brutal as possible as soon as possible as I will for Brisebois. I sincerely hope he sucks it big time and gains the press box before myself and other Habs fans make the trip for the Buffalo game on October 20.

Passing judgment on GM Gainey for this move, for the most part would be a rushed verdict. I agree with too much of what he has done so far with the team, to criticize him for this move, despite my misunderstanding of its necessity at this point in time. I have always given Gainey the benefit of the doubt.

Only this time, I have no doubt!

In the longer term, Brisebois will not, and cannot, help the Canadiens in the larger scheme of things (read: Stanley Cup). 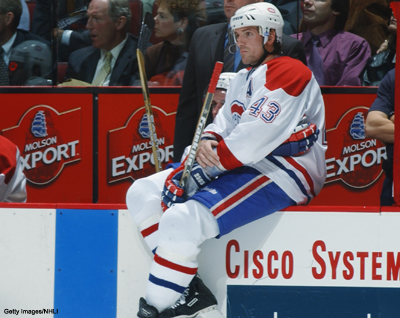 The experience of which he brings, despite having won a Cup in 1993, revolve more around bad memories than positive points. The move counters what experience would be gained, and more useful for the future, for a young defenseman on the rise.

Some are saying that Brisebois has much guts and balls for wanting to return to Montreal, though one has to wonder if he has left his brain in a time warp. He's being given credit and A marks because he "wants to play in Montreal". It's such crap - had any other team offered a slight raise, Brisebois would be there! No one wanted him.

It's like Eric Lindros saying he is considering retirement. An interesting and nonexistent option to him, in light of 30 teams not giving him a passing glance. Too busy working for an NHLPA he will soon no longer be part of - what bunk!

Brisebois should be in the same boat.

Fans are kidding themselves buying into Brisebois' spin-doctoring of the truth. A bad back caused him to 46 games on a decent team where, when actually healthy, he was a scratch from the lineup a good dozen times.

And we want this guy back because...

The same character that fled to Paris while on a stress leave from the team, getting jet lagged instead of resting as he was told?

I shudder because if Gainey believes Brisebois can help the Habs, then the GM's evaluation of the team is a less confident one that mine. That scares the daylights out of me.

Will Gainey have to stand up and defend Brisebois again, the first time he is booed?

Like, is there an over / under on the first boo of the year?

I say it happens on the first occasion he touches puck at the Bell. Possibly even at the announcement of his name on the first home date.

All told, Brisebois brings more questions than answers. As inexpensive a roll of the dice his signing is, I cannot fathom it's usefulness.