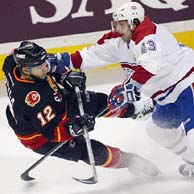 Like many other readers who were as caught off guard by this as I was, when I heard that former Canadiens defenseman Patrice Brisebois and Habs GM Gainey were seen having lunch together, all that came to mind were punchlines.

Could Brisebois be springing for a Happy Meal to thank Bob for enabling him to get out of town, buyout dollars in hand, two years back, freeing him from the pressure filled constraints of playing in hockey's hottest simmering kettle?

Maybe Gainey owed him a prime rib or filet mignon for leaving town without a word to blemish the dressing room ranks, not unlike Craig Rivet?

Is Gainey out to lunch?

Then I thought perhaps Carbonneau needs a new whipping boy to keep the troops in line?

But alas no, the punchlines turned quickly into a sucker punch with word that Brisebois has been offered a skinny one year deal to return to the city that once made him sweat in his mid winter sleeps.

My take on Brisebois has always been that he is a player with above average tools, minus the toolbox. He reminded me of Stephane Richer, forever gifted and distracted from public perceptions. This is a player, if you remember well, who was so stressed inside the CH crest, that Hab docs recommended he take an absense from the team to refresh his focus while nursing some aches and pains.

When his mental vacation took him to Paris, he made matters even worse upon his return. Nothing like a little jetlag to help one relax!

He does speak passionately and eloquently on team matters. He is a proud enough Hab to endure the well deserved wrath he sometimes takes on. But words don't always equal actions.
When it comes to Brisebois, you can sense the wheel is spinning but the hamster is dead. From the neck up!

As a player, Brisebois has been perfunctionary at best. Overpaid and overplayed, he came to be overcriticized as well.

Truth is he was never good enough to deserve being dragged through the mud for being something he never was. Money brought that on as much as his sometimes poor play did.

Brisebois was always capable of a decent breakout pass and possessed other offensive traits as well. Used on the powerplay, he could set up play with a fair amount of skill, but he guarded the blueline with all the confidence and poise of a shellshocked kid in a minefield.

In his own end, he was often an adventure waiting to unfold. In time he learned to reel in his capacity for wanting to do too much and settled into a comfortable game of positioning and simplicity. He played well when he was not being noticed, in other words.

Brisebois would never overcome his trademark "Breeze By" moniker, due to his brutal pivots that tended to auger his ass into the ice anytime a speedy winger would cut outside of him.
Now Gainey is looking into bringing the battlescarred blueliner back, wonky spine and all, as a sixth or seventh deep defenseman. From an hour away, I can actually hear eyes rolling inside heads at La Cage Aux Sports over the prospect of this happening.

Just how would this possibly make any sense, I have asked myself?

Can it simply be about depth? On defense, that is never a bad thing. Is it about veteran leadership and experience? I'd be more confortable with that notion if it were a player other than Brisebois.

Is that contract a two way deal that could see Brisebois starting the year and or playing mainly in Hamilton? That is definitely an interesting option for Gainey to peruse, but why would the veteran seek such a role?

My biggest concern deals with three players I see fitting into the extra defenseman role in Montreal much smoother than Brisebois. The three candidates of choice being Ryan O`Byrne, Jean-Philippe Cote, and heck, even longshot Mathieu Biron. 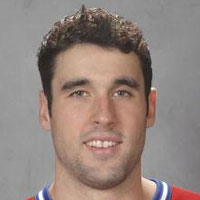 For the betterment of O'Byrne's continued developement, it is essential that he plays as many minutes as possible. He should not and will not be in Montreal simply to assume the 7th spot. Brisebois is the option should O'Byrne not be quite ready for prime time just yet.

Cote's time is now or never. He is riding the fine line between prospect and career minor leaguer at this point in time. I would think he is not a fan of Brisebois today. Cote has to be given an opportunity and an opening now, but Brisebois would close it up.

Also in the mix are the roles played by Mark Streit and Josh Gorges, currently sixth and seventh in D spots. The message to them as well would be negative in light of Brisbois signing.

I see it this way, plain and simple. When and if the Habs win the Cup, Brisebois will no longer be around. The experience a young blueliner would gain this season, would surely factor into a Cup run then moreso than any scraps of icetime given to Brisebois now.

It's a no brainer to me, and trust me, I didn't even use my brain on it in any way - honest!

The most popular thinking, is that Gainey is loading up for a trade, having possibly evaluated Brisebois equal to, or better than say Dandeneault or Bouillon. Should the Canadiens be attempting to aquire a player of certain impact, it may well require a package deal. The Canadiens have the bodies to pull such a deal off and this could be what sets it up.

There is still no official word on the contract buyouts for Jassen Cullimore and Tony Salmeleinen, so the Canadiens would sit at 52 standard player contracts at present if adding Brisebois. It could well be that the buyouts have happened without announcement, or that Gainey is slowly and quietly considering assets at hand.

One cannot shake the feeling that something is brewing. Gainey won't reveal what's up his sleeve other than a hairy arm, so the speculation is about to run rampant.

All we can do now, is question the questions!