Ryder's On The Storm

Share All sharing options for: Ryder's On The Storm 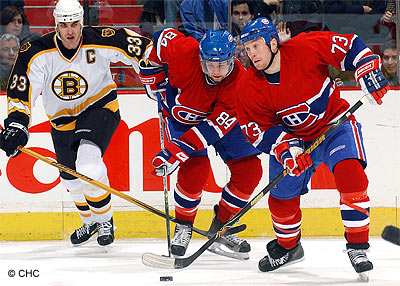 Drafted 216th overall in the 1998 NHL Entry Draft, one could say that Michael Ryder was a draft day crap shoot that paid off with long shot dividends.

Ryder has come a long way since that day, scoring 85 goals for the Canadiens over three seasons.

Always a natural goal scorer, Ryder was barely in the Canadiens scheme of things, even back when he was selected in the midst of the brutal Rejean Houle era. Through three GM's, and minor league stops in such hockey Hell's as Tallahasse and Mississippi of the ECHL, Ryder has fought off many a bias with his goal scoring prowess.

It was former Canadiens coach Claude Julien, after coaching Ryder for one season in Hamilton in 2002-03, who sought to promote him to the bigs.

While Ryder's complete game has always been questioned, his eyes for net space have rarely been in doubt. Julien's gamble paid off - as a 23 year old NHL rookie, Ryder found net 25 times, and in the ripoff of the decade, he was edged by Bruins flash in the pan, Andrew Raycroft, for the 2003 Calder Trophy.

Since then, Ryder has posted successive 30 goal campaigns, leading the Canadiens in that category in both seasons. 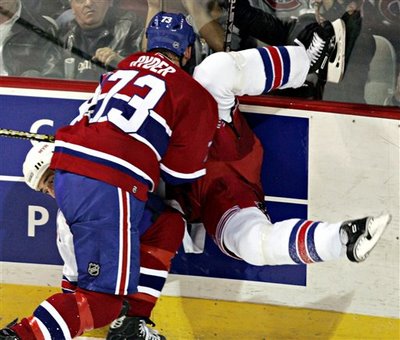 One would think that assessing Ryder's importance to the Canadiens would hence forth be a no - brainer.

The reason I bring up this question is due to Ryder heading for arbitraion, in a what has become the third installment of his annual RFA mid summer rite of recognition.

Ryder, it seems for many, is a difficult player to assess in the Habs overall team scheme of things.

Don't doubt that Habs GM Gainey isn't aware of his worth. Gainey signed Ryder prior to both previous arbitration hearings, avoiding the always messy pro versus con debates that tend to alienate players from teams.

The arbitration process for some players, is akin to going on trial. There will be a one year sentence, where the player is usually paid handsomely, but the thoughts of what your superiors really think of you tend to linger achingly in the backof your mind. 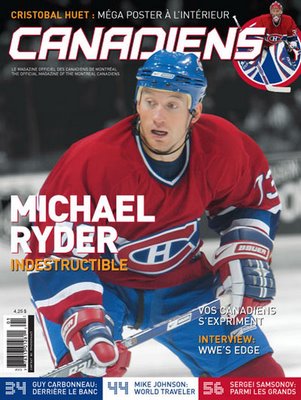 Players whose awards come out in their favor, usually find themselves elsewhere within a year. It is always a win and lose scenario, and surely Gainey is hard at work attempting to avoid it a third year running.

The connundrum is, again, that Ryder is one difficult player to assess.

In Ryder's camp, the argument will be that he is a pure goal scorer par excellance. They may name drop Mike Bossy and Brett Hull, in recognition of the type of shots Ryder can unleash. They will mention that uniqueness, in terms of the Canadiens lack of scoring prowess, in assessing his worth. They will, of course, compare his numbers with NHL'ers who are more fruitfully renumerated for similar production.

They would not be at fault for stating any of this.

The Canadiens, on the other hand, while tipping the hat to Ryder's goal numbers, will counter that he is hardly a complete player, and will seek to expose every defensive liability in his game. They will back their claims with their post season record, stating that the teams goals have yet to be achieved. They will counter than Ryder is a streaky player, who inconsistantly scores goals in bunches before cooling down. They will most certainly offer Ryder a reasonable raise in salary. They will balance both sides of his game in their perspective.

The Canadiens also, would hardly be faulted for stating any of this.

An arbitrator will then decide between each point of view. Previously, they chose between offers from each side, but this is no longer the case, since the bargaining of the last CBA.

Whichever way the decision falls, the spectre of public opinion will be divided. 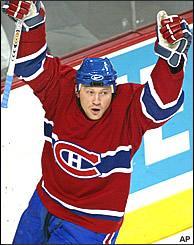 Last season Ryder earned 2.2 million for the 30 goals he scored. If you were to examine the salaries of the other 29 NHL teams, you would be hard pressed to find another teams leading goal scorer who made so little.

If the Canadiens want to come out on the side of victory in such a case, they would henceforth be best off not comparing Ryder to similar goal scorers around the league. It would be detrimental to their point of view. Gainey will stick to placing Ryder in a team scope.

In either scenario, Ryder would hit paydirt.

For perspective, Ryder has been a Hab for three full seasons in which he has potted the aforementioned 85 goals. In his rookie season in 2003-04, the Canadiens employed 34 players, 25 of which have since left the organization - surprisingly!

Of the nine players remaining ( Higgins, Plekanec, Kovalev, Koivu, Begin, Komisarek, Bouillon, Markov, and Ryder) only 5 are forwards. Considering that Higgins and Plekanec were callups who played little that season, that Kovalev was aquired just prior to the trade deadline, and that Begin is in no esteem a goal scorer, there remains little in respect for comparison other than team captain Koivu.

In the last three season, Koivu's totals are 14-17-22 for a total goal tally of 53. Sheldon Souray, now departed equalled that stat with seasons of 15-12-26. Higgins in two seasons has totalled 45 goals. The next nearest to those numbers is Alex Kovalev, who in two seasons and little has gone 1-23-18 for a total of 42 goals.

Should the Canadiens be in need of goals scored next season, who do expect they will rely on most?

My guess is that Bob Gainey has already offered Ryder a 3.5 million dollar enumeration, perhaps over two seasons.

As Koivu and Kovalev earn 4.75 and 4.5 respectively per annum, my guess the Ryder camp is bidding in the neighborhood of 4.2 tops.

I'd be comfortable with Ryder, all game facets considered, making 3.8 million.
Anything more will be scandalous.