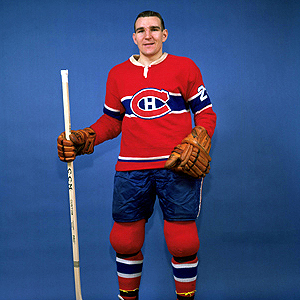 Hockey has lost one of its most colourful characters. John Ferguson, one of the toughest players ever to lace up skates and drop gloves in the NHL, died Saturday of prostate cancer. He was 68. 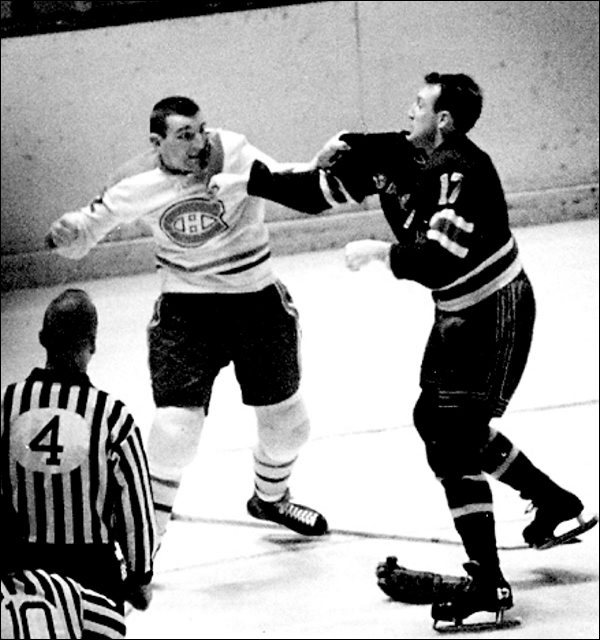 I have selected some of the best articles from news sources and blogsites on John Ferguson's passing. There are many cherished stories here on Fergy from some who knew him best. 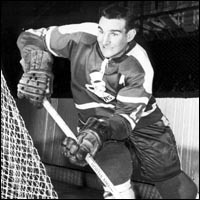 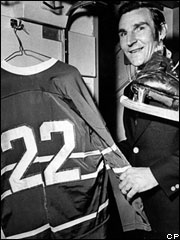 He is survived by his wife Joan, with whom he lived in Windsor, Ont. Their son, John Ferguson, Jr., is general manager of the Toronto Maple Leafs.

''My father battled cancer with the same spirit in which he played the game of hockey,'' Ferguson, Jr. said in a release. ''He showed courage, strength, class and tremendous character. He had deep appreciation for the support he'd received from so many people beginning with his initial diagnosis. 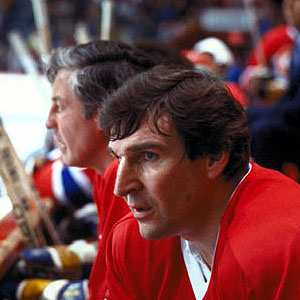 ''My father's spirit will continue to live on in all of us whose lives he touched.''

Ferguson, who was born in Vancouver, played eight NHL seasons between 1963-64 and 1970-71, all with the Montreal Canadiens, and he helped them win the Stanley Cup five times.

From the moment he suited up for the Montreal Canadiens, Ferguson vowed to be "the meanest, rottenest, most miserable cuss ever to play in the NHL." The Canadiens had recruited the fierce forward because they felt the team lacked toughness, and John Ferguson delivered in spades. 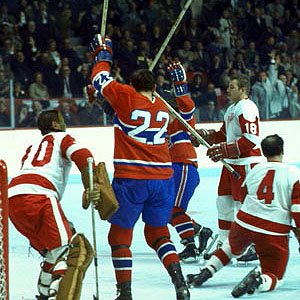 While Ferguson was striking fear into the hearts of opponents with the AHL Cleveland Barons, as many as four of the NHL's six teams came calling for his services. The Barons owner knew Ferguson's worth and held onto him as long as possible, creating a sort of bidding war for his player. He sold Ferguson to the Canadiens on July 2, 1963, as it was Ferguson's preferred destination, and he had told the owner that he would refuse to report anywhere else, thereby nullifying any sale elsewhere. 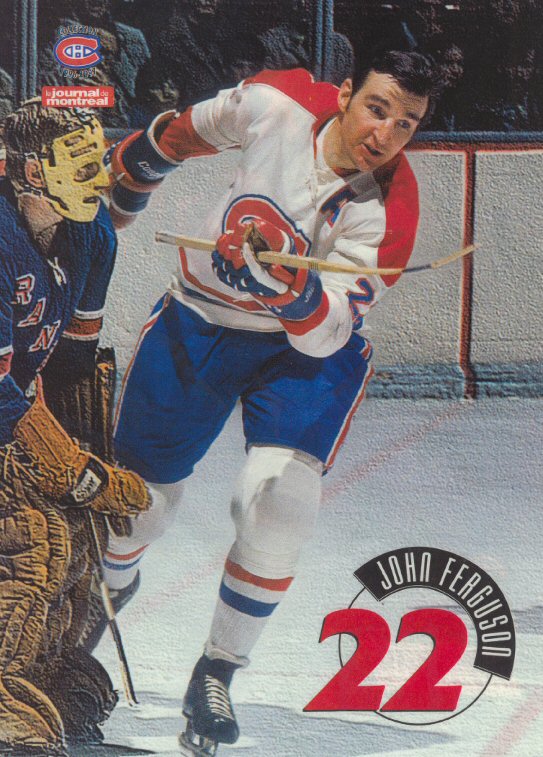 There was never a more determined hockey player than Ferguson. He'd crash the crease upon scoring and drop the gloves in defense of teammates if need be. Along with his 145 goals, an average of 18 per season, and 158 assists, he amassed 1,214 penalty minutes in 500 regular season games. 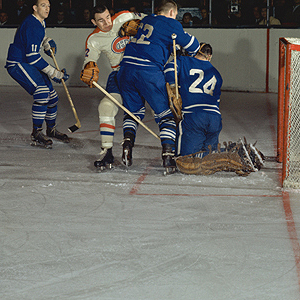 Ferguson was more than just a bodyguard for Montreal's stars. He scored 38 goals in his final season with the Barons but because of his reputation as a tough-as-nails combatant he got into his first fight 12 seconds into his first NHL game. It is often forgotten that in his first season he led all NHL rookies in scoring and was runner up in voting for rookie of the year to teammate Jacques Laperriere for the Calder Trophy in 1963-64. He had his most productive season in 1968-69, scoring 29 goals and 52 points. 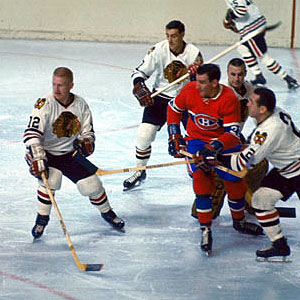 In that first NHL game, Ferguson scored two goals and added an assist after fighting the Ted Green of the Boston Bruins and was named the game's first star. From that point on he was regarded as hockey's unofficial heavyweight champion until he retired. Ferguson played much of his rookie season on a line with Jean Beliveau, who won the Hart Trophy that year. 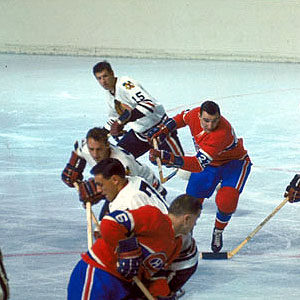 When Ferguson scored the Stanley Cup-winning goal in 1968-69, he capped a season in which he scored 29 times and had a plus/minus rating of plus 30. 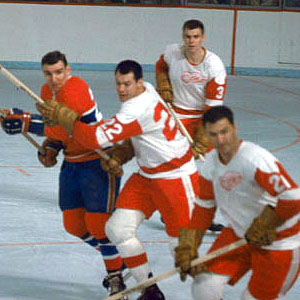 After his retirement, he revealed the true reason for his early departure from the game: that he was afraid he'd eventually kill somebody.

''There was no more passionate competitor, as a player, as a coach or as an executive, than John Ferguson,'' NHL commissioner Gary Bettman said in a release. ''He was tough, he wanted the best for his teams, his teammates and his players, and his country, and would stop at nothing to try to help them win. His fight against cancer was every bit as fierce as his competitive drive on and off the ice.'' 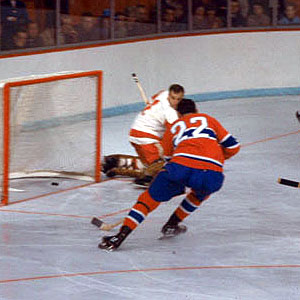 Ferguson was once dared to fight Canadian heavyweight boxing champion George Chuvalo and he was willing to enter the ring but the Canadiens wouldn't give him permission.

He was an assistant coach for Team Canada in the historic 1972 Summit Series. Standing behind the bench watching Valeri Kharlamov flash around the ice, Ferguson frowned and said, ''He's killing us.'' Bobby Clarke went out and slashed Kharlamov across an ankle. Kharlamov's effectiveness waned and Canada prevailed. It was another entry in the Ferguson legend. 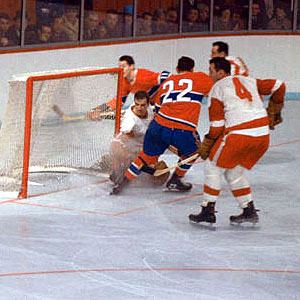 Ferguson was GM and coach of the New York Rangers for two tumultuous years from 19776 to 1977; GM of the Winnipeg Jets, and briefly coach, from 1979 to 1988; manager of Windsor Raceway between hockey jobs; director of player personnel for the Ottawa Senators from 1992 to 1995; and a senior scout for the San Jose Sharks since 1995. 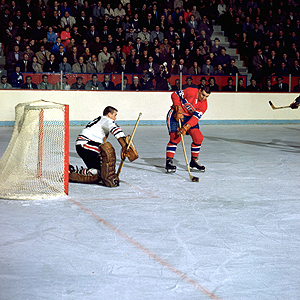 ''John Ferguson was one of the most beloved figures to ever represent the Sharks, as well as the entire National Hockey League,'' Sharks GM Doug Wilson said in a statement. ''His sense of class, grace and love of the game of hockey is legendary among those who were fortunate enough to know and work with him.'' 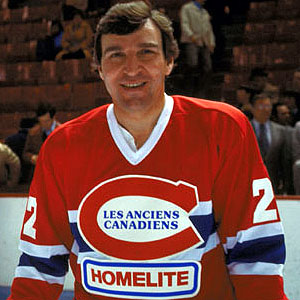 Wherever he went, Fergy, who had a great sense of humour away from the rink, made lifelong friends.

He was diagnosed with prostate cancer in September, 2005. 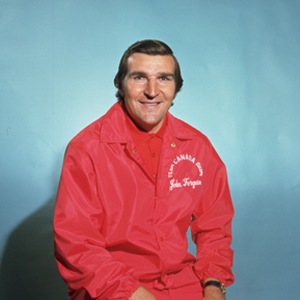 Legends of Hockey writer Joe Pelletier, a great fan of hockey toughness, has a great bio on Ferguson. Joe is presently on a fishing excursion and will most surely have something up on Fergy upon his return. You can read Joe's Ferguson bio here. 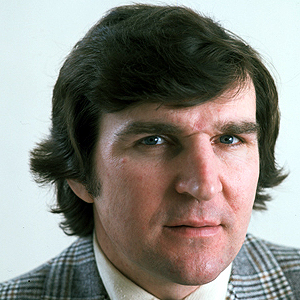