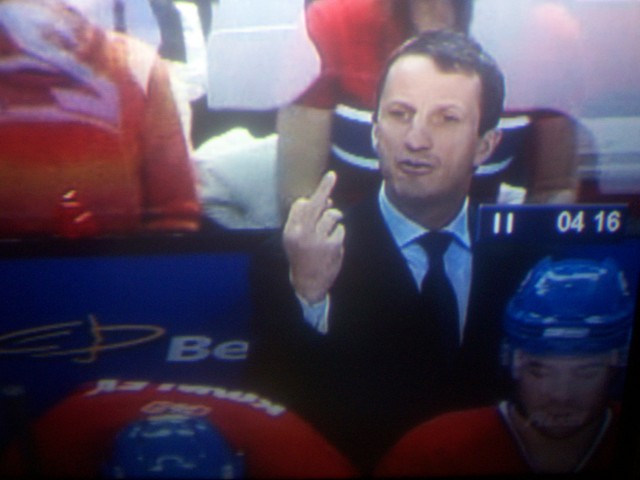 Midway through the 2006-07 season, Canadiens coach Guy Carbonneau was the happy recipient of accolades that described his coaching career as being very much right on track. The Habs powerplay was top ranked, the penalty killing unit was not far behind, and the Canadiens had eyes on the first place Sabres.

Shortly thereafter, stones thrown into the Habs playoff path got larger, and before long, the wheelbarrow containing the teams post season aspirations were teeterring left and right and headed straight into the quarry.

Carbonneau's rookie shortcomings were soon exposed, it was said. Certain mistakes were made, and questions arising from unknown sources began to point in the coaches general direction.
By the seasons end, what was once a small flesh scrape became a giant festering wound - if one is to believe rumours and generally ill informed sources.

In many factions, to my observation, the misinformed truth is starting to be talked about as if it is fact - in the case of what exactly rotted Carbonneau's season. There has been supposed media leakage of dressing room innuendo, that combined with poor play by the team, has combined to shake the fans faith in Carbonneau.

The honeymoon ended in Detroit last January, near about the time Carbonneau sought the sitting out of long time veteran Craig Rivet as a means to shake the team complacency and send a message to inner clicks. Rivet, a long rumoured whisperer to the Habs english press, did not take kindly to the Carbonneau stand, and the ripples were felt conversely throughout the hierarchy of the team. 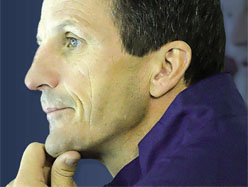 Carbonneau's move had merit. After many a back pat of encouragement and rigid defenses of his players failed to properly motivate the troops, he choose the hardline - a method that often works to desired effect. It took belief, balls, and conviction, but it backfied on the coach, who perhaps miscalculated the depth of the teams woes.

What Carbonneau saw, was a team that was failing to put in the necessary effort, and he responded with what he felt was the proper cure.

In the end, a coach can only coach the team he has, and not the team he wishes he had. This applies to facts of talent and experience, as well as injuries and dedication.

Among the many tasks Carbonneau has to perform, he must motivate, instruct, inform, pamper, and prod players into being able to fit into all game situations. Beyond all that, Carbonneau asks each individual to work hard. And then harder. 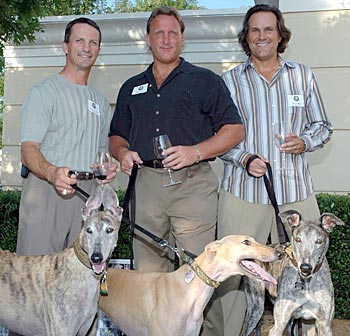 Carbonneau's resume of hockey knowledge and resources, according to teammates and other witnesses over the years, has never been in short supply. His assets have been said to include communication and understanding, along with having been the type of player who once fit snuggly and adeptly into any of his former coaches game plans.

Carbonneau's reputation based on former teammmates comments testified to his game smarts, his attention to detail, his patience and savvy in instructing younger players.

In short, he had all the tools.

His most ardent student, in his days in Dallas, had been teammate Brendan Morrow, who among others, attested that he learned much of his game from Carbonneau's teaching. (Take that Morrow has since married Carbo's daughter with a grain of salt in his compliments.) Morrow's game grew with each passing season, and resulted in him being named the Stars captain last year. 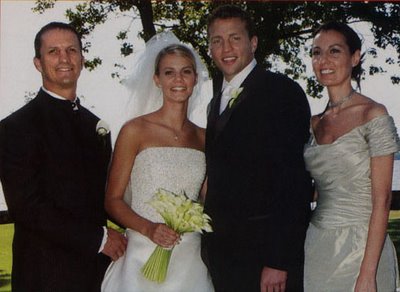 Often it said that a team is only as good as it's system, but that notion is a bit of a fallacy in that all coaches reaching the NHL level have methods and practices in place that have gotten them there. Coaches are more knowledgable than they have ever been, and what separates one from the other often boils down to nuances, these days, rather than grand philosophies.

Today, a team is only as good as their willingness to work hard, listen and learn. A chain with weak links, eventually becomes about as strong as a shoestring.

People criticize Carbonneau 's system without being able to answer exactly what that system involvest. It is quite more detailed than a matter of preference of how players are deployed.

It's more than simply a trap - all teams employ the trap at given times. It is not a 1-2-2 setup, nor a 2-1-2 spread. All teams throw both system onto the ice, when games and line matches call for it. It is neither the choice between a puck possession or puck pursuit strategy. Think about it - pursuit leads to possession! Coaches league wide adjust with these facets in games based on score, opponant, and stage in the game.

Teams don't sit back, necessarily, by purpose or coaching instruction. It's another misread popular notion, based on a lack of perceived intensity. Setting up four players in mid ice is designed to slow a team down. It's done because it works.

The command in games in which a team holds a lead is to aggressively gain the puck and dump it deep in order push a team in their end and hold them there by pursuit. When teams are seen sitting back, it is usually a hesitant reaction by a group lacking confidence. It's only logical that a coach would prefer to see his own team deep in the opponants end, holding the play there confidently, in the dying moments of a game.

A coaching system is often made up up several types of coverages, both offensively and defensively, that are related to the players put on the ice for both teams. The set ups alter constantly during the course of a game. Teams have certain modes that are employed as a rule, other situations call for exeptions to the rules that require instantaneous adjustments by sharp eyed coaches.

The notion of a system in which each player robotically sticks to one set one rules is a frivolous one. It plainly doesn't exist. In the ebb and flow of a game, one based on speed, situations can alter with a player leaping over the boards.

A coaches job not only involves preparing his team to adjust to the given tendencies of that nights opponant, vis a vis line matching, but also to recognize that the opponant also has several tricks up their sleeves.

The coverages that teams deploy vary from line to line, and zone by zone. The offensive and defensive plays are also designed to suit the players at hand, tempered against those on the opposite team. Breakouts for different defenseman pairings are altered. They are also geared towards taking advantages of the weakness of the opposing team.

Setting up in the offensive zone varies positionally for different players. Certain line combinations have better puck cycling skills than others. Some lines put an accent on puck pursuit by utilizing their speed. A slower footed line, call them grinders if you wish, may rely more on the physical aspects, and seek to gain their edge in pinning their opponants to the boards while double teaming. The options are seemingly endless for how combinations of players of differening skill levels can be used. 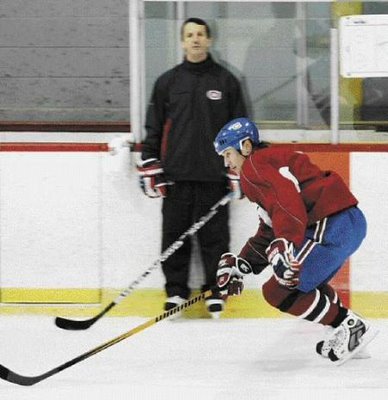 What doesn't change as much, in whole of the big picture, are players and their tendancies, their limitations, and experience levels. And this all comes back to a coach, coaching the team he has.

Beyond this big picture, it is the job of the coaching staff to improve these players. It is also the duty of the players as well, to work at learning a complete game involving all the scenarios of play mentioned above.

In Guy Carbonneau's case, he knows all this and more. A two decade veteran of the game, and three time Stanley Cup and Selke Trophy winner does not lose all of his knowledge and intuition with the passing of a bad half season.

Doubters in him are simply misguided, or perhaps vastly unknowledgable. Dislike him if you choose, but question yourself before questioning the coach. That old motto always served me well. In players terms, that is called looking in the mirror.

For myself, I have never been too smooth on that smartaleck grin Carbonneau wears on his face in the event of a cheap call by officials. Seeing it become a permanent fixture across his face predictably lead to trouble and disrespect from officials, and by no coincidence, indiscipline from his players. The younger and more easily influenced players treat such a coaches rebuttal as an out, an excuse for what comes both before and after such calls. It's a negative trait of Carbonneau's that he should seek to rectify.

There were of course other faults by the rookie coach. Without adding myself to the redundant rhetoric, I found a common trait in many of his wrongs.

Carbonneau as a coach, is a work in transition. He is by grooming, an old school hardliner who is attempting find his place coaching players who are rarely as schooled in the same methods and demeanor. His faults, if one call term them so, mostly begin here. 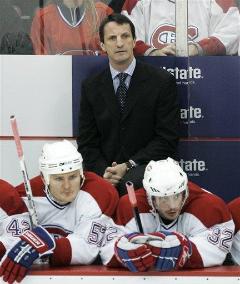 Patience was not Carbonneau's virtue this past season - he had way too much of it to the liking of some, yet not enough in the eyes of others. While holding firm to many notions, teams adjusted to the Canadiens game.

Much of the fuss about the coach emanated from a pair of rumblings by Alex Kovalev in Russian papers during, and at the close, of the disappointing season. The root of the Carbonneau questioning began here, and concerns about his communication shortages were brought forth.

Oddly, in the season's first half, Carbonneau's communication traits were an oft mentioned key to the teams success.

On the flipside of the equation, the are a bevy young hardworking players who bested their best seasons in the midst of all the turmoil. Carbonneau is unfairly never credited as having a helping in hand in their developement and progression. By no small coincidence, the players who had worked the hardest, did the best. That seems to testify that Carbonneau completed a good potion of his coaching mandate.

Yet, from chatrooms to talkshows, the chatter has failed to move beyond Kovalev's accusations. Considering the notorious hard worker and supreme team leader Kovalev is, I'd tend to question anyone who puts faith in his comments rather than question the coach.

If one chooses to form their opinions based on the pure speculation from supposed misquotes from an unhappy player, that's their blindfold!

I'm with the coach!