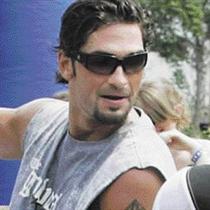 Here's is an interesting article by the Gazette's Dave Stubbs, going back a little over one ago to July 17, 2006. At the time, Souray was heavily rumoured to be on the move, having asked for a trade. As rumours usually go, this one also proved false. It is, however, very curious to look at how things evolved from one year to the next, after Souray enjoyed a career year.

Reading over Souray's quotes, one gets the sense that he has felt at home in Montreal, despite all the challenges his time here has shown him.

Hockey season must be near: the rumour mill recycled the idea last week that Canadiens defenceman Sheldon Souray wants to be traded.

"These 'confirmed' reports about me asking for a trade?" Souray said yesterday. "I've never seen (Canadiens general manager) Bob Gainey confirm them, and I've not been called, nor has my agent, to confirm them.

"So I guess they're being confirmed by the people at the water cooler, and that's unfortunate. You have a lot of people who are influenced by what they read in the papers, which is a downside of playing in Montreal.

"Over the years, I think I've proven I can play here. It's not an easy place to play. Look at some of the free agents who have turned down the opportunity this summer to play here, for some of the reasons that everybody knows - the media hiding behind bushes, starting rumours. You're going to wear yourself very thin if you try to defend every single thing being said about you, so it comes with the territory.

"But do I like it here? Absolutely. I like the guys, and in hockey years, I've been here a long time, going into my seventh season (counting the 2004-05 lockout). The organization has had faith in me and believed in me, through my injuries and other issues (the distraction of a highly publicized separation).

"I'm under contract this year, and whatever the Canadiens' plan is for this year and beyond, I guess only Bob and his management team are privy to that."

He'll be an unrestricted free agent at season's end, and it's no secret that his 3-year-old daughter, Valentina, living with his estranged wife in Los Angeles, is the centre of his life.

But yesterday at noon, sweating through a charity ball-hockey game outside the Rivieres des Prairies pizzeria he co-owns with New Jersey Devils goalie Martin Brodeur and restaurateur Andrea Dell'Orefice, Souray said he has one goal in mind:

"What's important is that I get off to a good start. For some reason, some people maybe have lost some faith in me, with all these rumours I want to be traded. I feel like I have something to prove again this year, the same way I did when I came back from my injury," when he lost the entire 2002-03 season with a career-threatening wrist injury.

"The last thing on my mind is my contract. My focus is having a great start and making sure we have a little more success than we had last year."

Souray struggled out of the gate last season, slowly finding his game in the new rules of the post-lockout NHL, his life complicated by domestic problems in late October. But he would score 12 goals and add a personal-best 27 assists in a career-high 75 regular-season games, then added three goals and two assists in six first-round playoff games against the Stanley Cup-bound Carolina Hurricanes.

He'll begin skating next week after a summer in the gym and expects to pick up the pace in August, power-skating with Canadiens strength and conditioning co-ordinator Scott Livingston, with whom he's been working this offseason.

"When camp opens, I want to be prepared for the season," he said. "We've had one year with the new NHL. It's been an adjustment, and hopefully you step in and you're ready to take your game to a different level."

Souray says he doesn't care if his agent, Paul Theofanous, talks contract with Gainey before September's training camp or during the season.

"That's why you have an agent," he said. "One way or another, the good Lord willing, I don't think I'll be without an NHL job next season. I feel great mentally and physically, and I have a lot of things in my mind that I want to achieve. When you take care of that, the contract takes care of itself.

"It's simply not a worry. Bob, the Gillett family and all the management have been good to me. If I'm in their plans for the future, that's great."