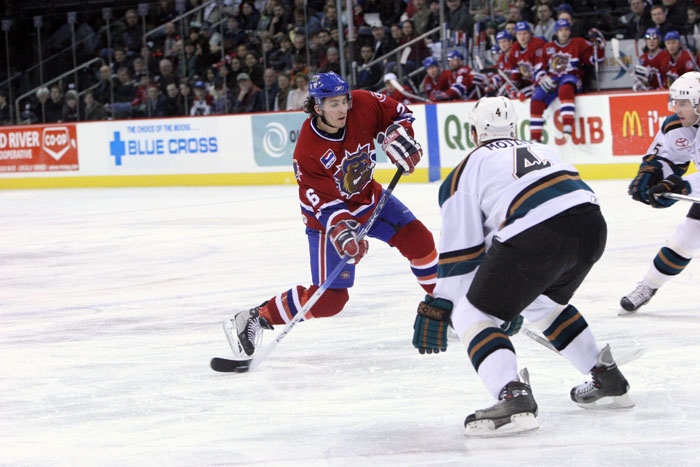 Transcribed, and greatly improved, from a pair of Mark De Foy articles in this weekends Journal De Montreal.

Maxim Lapierre didn't head back to Hamilton at the term of his NHL season to squander his time away. Two months after his rookie NHL campaign ended the 22 year old forward is returning to Montreal with his first championship in the bag.

"It's incredible", when asked by Le Journal to decribe his emotions.

Lapierre has just returned from Hamilton City Hall from celebrations the city planned in honouring the Bulldogs.

Winning the Calder Cup is new territory for Lapierre.

"We lasted one round, in my first junior season with the Montreal Rocket." 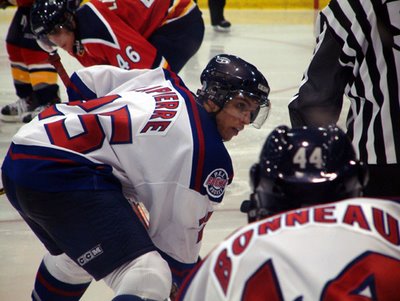 The following year, after the team moved to Prince Edward Island, the Rocket lasted two rounds.

Lapierre didn't bat an eyelash when the Canadiens asked him back to Hamilton in April. Quite the contrary, he was anxious to continue playing hockey. He explains his enthusiam for the return as having everything to do with team spirit and competitiveness.

"I learned so much in two months", he adds.

"I played a whole different role on the team. I played in game ending situations. I went from a rookie to a young veteran." 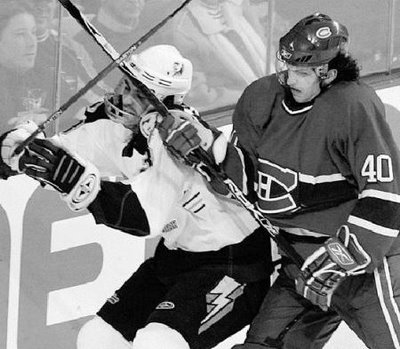 Considering he was mostly handed a defensive role, Lapierre's offensive numbers didn't slouch as he finished with 12 points, including a goal and an assists in the final game win over the Hershey Bears. 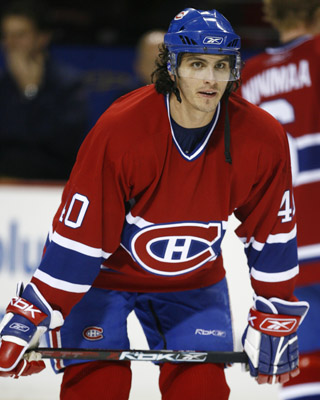 His linemates were Zack Stortini, whose NHl rights belong to the Oilers, and Corey Locke, who finished second in playoff scoring with 23 points. A natural center, Locke blossomed on the left side of Lapierre where he was positioned for the playoffs duration.

"Locke is peerless as a playmaker on the powerplay", says Lapierre, "In traffic, he has no fear." 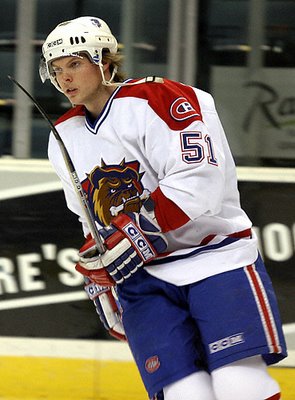 Jonathan Ferland is another forward who opened eyes in a defensive role. Teamed with Ajay Baines and Kyle Chipchura on the Dogs checking line, Ferland tallied 9 points in the playoffs and was noted for his intensity and physical play.

"Jonathan had quite the year", says Lapierre, "His hits were devastating."

Against the Rochester Americans in the first round, and again in the west division final against Chicago Wolves, one could literally hear when the forward from Beauceron was on the ice.

"He's very good defensively", added Lapierre about the + 7 Ferland, "He is possibly ready for the NHL."

At 24, Ferland is at a crossroads. As his contract is expiring, he may find work elsewhere should he not figure into the Habs plans. 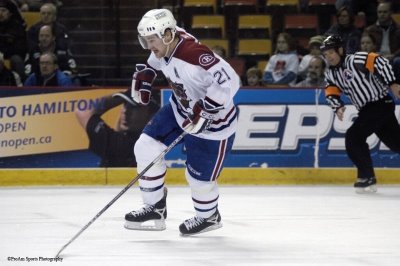 For Lapierre, the first championship of his career can only help in sonsolidated his position with the Canadiens. He is not intenting to rest on his laurels long.

"There are a few more days of celebrations, then it's back to work", he offers. 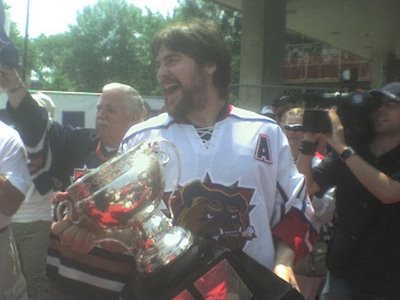 "I'll be taking no more than two weeks holidays because next season is coming fast. That's the deal, I really have little choice if I want to be at my best come training camp in September."

Much has been spoken of Carey Price, and his exploits in duplicating Patrick Roy's feats with the Sherbrooke Baby Habs 22 seasons ago. While both gratuated to the AHL at age 19, from dismal junior squads, and went on to win the Calder Cup, one difference remains. 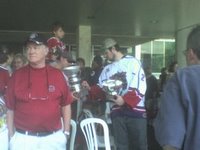 Price was named his team's MVP, whereas Roy didn't get the nod in 1985. Many people might assume otherwise, but the Jack Butterfield Trophy winner than fall was none other than Brian Skrudland.

That makes two MVP honours in one season, an absolutely unique achievement. With a Calder Cup, a gold medal at the WJC, and the title of CHA Goaltender Of The Year, could there be more in store for Price in 2007?

Supposing the kid begins the season with the Canadiens and fares well, my guess is that he will garner his fair share of votes for Canadian Male Athlete Of The Year. It would be much inprecedented for a 19 year old, but he would hardly be stealing the honour. 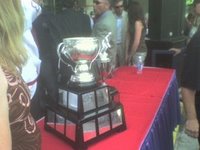 "What else can be said about him", Lapierre asked rhetorically, without pause for an answer.

"All I can add is that every save seems easy for him. He's loaded with natural talent."

The teenager just never gets nervous.

Lapierre relates a little anecdote about the goalie, as Hamilton teammates were getting to know him better. During the four rounds of playoffs, much was made of the puckstoppers calm and composure, to the point were his stoic ways and sedate demeanor were fodder for teammates jibes. 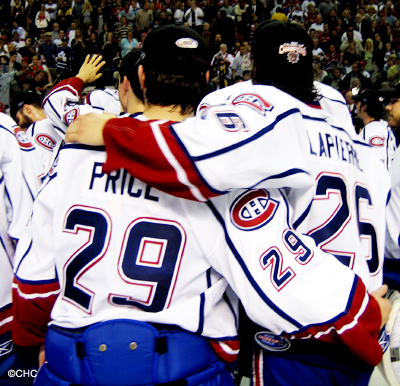 Before the fourth game of the final, Lapierre couldn't help himself as he turned to Price and asked him pointedly, "Well, are you having fun, at least?"

Lapierre laughs loudly recalling the moment, but one thing is for certain - the Hershey Bears didn't find Price too funny!

Over the years in Montreal, there have been many controvercial goalie debates in the minds of the city's hockey mad populace. Who will play? When and where? The topics seem to have a three years cycle before being mounted again. 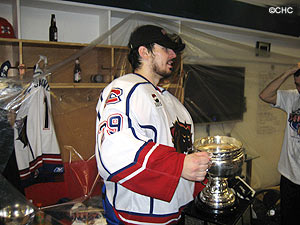 Never in all my years of following the team have I seen the subject bounced around so much, so early in the summer.

While following the Bulldogs in Hamilton, Bob Gainey, pleasantly annoyed by the endless questions, firmly stated that Price would not come to Montreal to get aquainted with the left end of the bench.

In retrospect, in Patrick Roy first Montreal season, he had to unseat both Steve Penney and Doug Soetaert to gain the number one starter role down the stretch. Roy ended up appearing in 47 games (23-18-1) and registered a 3.35 GAA during the regular season.

It was only come playoff time, that he began showing the first signs of invincability.

In the case of Price, there will be more than one such adventurous prognostication made.

Cristobal huet and Jaroslav Halak had better be at their best come day 1 of training camp.

Pictures from the Dogs Rally were taken by Sherry of Scarlett Ice from her post entitled "An Impromptu Visit To The Bulldogs Rally". Get there and read about her day - it's a great post. She is a Sens blogger, mainly, but the sweetie has a big thing for the Habs as well. Be nice and offer kind condolences - she a non-Leafs fan living on their battleground. 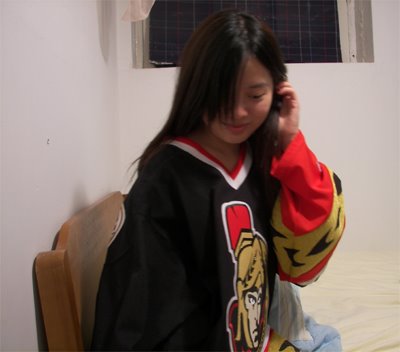