Share All sharing options for: The Inseparable Mike Komisarek and Chris Higgins 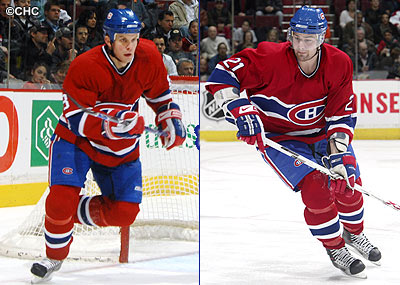 New York natives Mike Komisarek and Chris Higgins are the best of friends who train together in the off season on Long Island. The pair share the same agent, Matt Keator, and both decided late last week to sign virtually identical contracts with the Canadiens on the same day.

Talk about an original way of doing things!

Komisarek and Higging both accepted the terms of a two deal that will pay them 1.5 million for the upcoming season, followed by 1.9 million for 2008-09.

"The negotiations took place separately", says Keator, "The facts are that both players have so far followed similar paths in their careers to be where they are now at. Where they both stand in that respect is comparable."

"The negotiations went very smoothly with Julien Brisebois, Bob Gainey's right hand man. He is in my estimation the best vice president of hockey operations in the NHL.

Higgins who scored 22 goals and added 16 assists will see his salary jump from $673,000 to 1.5 million. His stats would have been ever better had it not been for an ankle injury suffered one month into the season. Higgins had 13 points in his first 13 games, including a team leading 8 goals. Komisarek made $947,000 last season.

"We find it awful funny to each have signed our deals on the same day", said Higgins by telephone, "Our situations are similar, si it just makes sense."

"There won't be any jealousy between Chris and I", says Komisarek. "Though I told him that in my eyes, he's overpaid", he added with a laugh.

The big 25 year old defenseman, the Habs first round pick in 2001, is thrilled to have the deal done so soon. He has been training with Higgins since mid May at the 3E Institute in Long Island. Komisarek had 4 goals, 15 assists last season, and a plus +7 rating in 82 games last season. He finished the year with 248 hits, 2nd amogst defenseman, and fourth in the NHL.

Both players understand that they will be asked to play even larger roles on the team this upcoming season.

"The time has come for us to make an even bigger impression", says Higgins. "We're no longer rookies. I found it extremely difficult to miss the playoffs for the first time in my career. I don't want to live through this again in my lifetime."

Komisarek was happy upon hearing that Andrei Markov had re-signed with the Canadiens.

"He is one of the elite defenseman in the league and we communicate very well on the ice together.He helped me progress over the course of the last season."

Both Higgins and Komisarek are hopeful that Sheldon Souray signs with the team but are worried that the defenseman with the canon blast gets an offer he can't refuse from another team.

They've both heard the rumblings about Alexei Yashin from Long Island, naming the Habs as a hoped for destination.

"I've trained with him before and he's a good guy", says Higgins. He has great hands for a player his size. We'll just have to wait and see what happens.

Komisarek is well aware that the player is talent laden and ads "I'd have no issues with playing with him as long as he works hard."

Bob Gainey has stated that Higgins and Komisarek are part of the team's core, and will be counted on for many years to come.

"Christopher is a complete player with great offensive skills who improved consistently since making his NHL debut. Mike displayed outstanding defensive poise over the past seasons and his physical presence is an undeniable asset to our group of defensemen."

The GM has three remaining RFA's to get under contract: forwards Tomas Plekanec and Michael Ryder, and defenseman Josh Gorges. He has previously stated that no offers would be tended to forwards Radek Bonk and Mike Johnson until after July 1. Remaining unrestricted free agents Janne Niinimaa, Aaron Downey, and David Aebischer will be looking for work elsewhere.