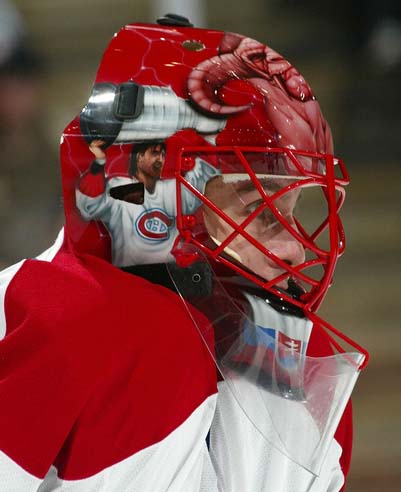 After it was announced late in the year that Halak had received the AHL's nod for All - Rookie team goaltender, I quickly looked up all the other NHL rookie goalie stats and found that the only stopper than had the goods other than Halak was Mike Smith of the Dallas Stars.

I thought that if voters saw things in the same light as I, Halak stood a better than fair chance at notching both.

It was not to be.

As it often happens, the vote was decided by merely looking at statistical data, and not by comparing the individuals team strength.

On the NHL.com site, Smith's winners bio reads this way: 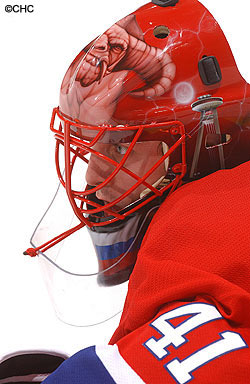 This leaves little doubt as to Smith's qualifications for the award, on the surface.

Halak, who is 21, and only a half season removed from the ECHL had 16 appearances with Montreal, winning 10 and losing 6. His goals against was 2.89, and his save percentage was .906.

Along the way, Halak was given one of those dubious stars of the week nods, which are often a case of didn't do anything that particular week.

My main bone of contention with voters not skimming below the surface in this matter, has to do with the roles each goalie was handed during the course of the season.

For starters, Smith was clearly in a backup role to Marty Turco with Dallas all season. As a rookie, he was surely given selected stars ( read easier games) tobring him along at pre-planned pace.

Halak, on the contrary, was thrown directly into the fire, faced with having to resussitate squandering playoff hopes on a team that had nosedived in the standings. He came within one win of achieving it, had coach Carbonneau properly seen fit to give him the final game he so rightly deserved - and that's a whole other history lesson! 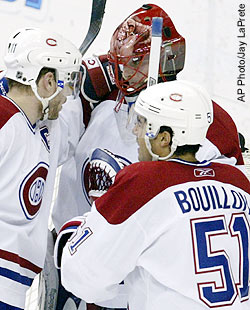 Smith was on the Dallas roster from the beginning of the year, wheras Halak came on in the final third of the season, where a desperate team awaited.

While Smith got the light games, Halak battled down the stretch, defeating teams also in the playoff hunt.

As far as comparative numbers go, Smith runs all categories up first glance. Being that he played in 7 more games and had the entire season to do so, it is not surprising that his numbers are superior. In fact, placed in that context, they should be.

But given those additional 7 starts, Smith won only 2 more games than Halak did playing at the toughest time of year.

The more telling of goalie stats, the goals against and save percentage categories, are hands down won by Smith.

Again I must state, there is great deception in those stats when placed in a team context. Dallas, a tightly defensively oriented team, played shutdown hockey all season through. Case in point, Smith's total was identical to Turco's 2.23 GAA and .910 save percentage.

This tells me that no matter which goalie was between the Stars pipes, the team in front of him played the same composed game.

Such was not the case for Halak, who was in essense the starter for the majority of his late season stint. With number one goalie Cristobal Huet on the injured list, Halak basically rescued the teams hopes from the play of the ever more floundering David Aebischer.

Halak's play settled the Habs game down some, and the team could then approach each contest more calmly. With the rubber maid goalie that was Aebischer, the Canadiens began each game nervous to the notion that a minimum of two weak goals would set them back even before the game began.

That's quite a contrast between what they had become used to during those final desperate weeks.

These non-statistically based facts, also contrast greatly with Smith's role in Dallas.

None of this aims to take away from Smith's accomplishments, however, it only seeks to place them in perspective with Halak's heroics.

There is one statistic in Halak's favor that is not included in the NHL goalie's line, and that is winning percentage.

Discounting the two overtime losses on Smith's resume (because they are not wins), the Dallas goaltender had 12 wins in 23 games, for a winning percentage of .521. Heck, team don't make the playoffs with a stat like that!

Considering the quality and importance of Halak's game, he should have been a two league All - Rookie Team Goalie - no contest.