Share All sharing options for: Habs' future in Bulldogs' paws 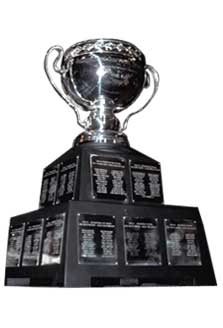 The Hamilton Bulldogs continue to defy the odds, and are now one big win away from clinching the 2006-07 Calder Cup.

Pardon me for getting ahead of myself, but the Bulldogs forthcoming championship, cannot help but benefit the Habs in a bundle of ways.

In a season where the parent Montreal Canadiens missed the playoffs, a Calder Cup Final for the Bulldogs is truly the next best thing. It speaks volumes for the accomplishments of the Canadiens management in assembling a group of young hopefuls with such promise three seasons into the current team management's regime.

It also bodes very well for the Canadiens future as the last four Montreal farm teams to win the Calder Cup have won the Stanley Cup the following season. The Nova Scotia Voyageurs won in 1971-72, 1975-76, and 1976-77. The Sherbrooke Canadiens, underdogs until the end, captured the Calder Cup in 1984-85. 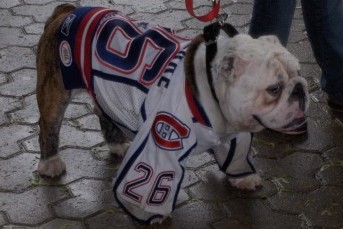 While a repeat of these exploits seems highly unlikely in a 30-team NHL, it does show that the Canadiens are on the right track. When GM Bob Gainey took over the Canadiens reigns on June 2, 2003, he promised to build the team from within. He has fullfilled that aspect of his mandate to perfection. The 2003 Bulldogs made the final, and now the 2007 edition are poised to grab the mantle.

Of the 24 players who participated in the Bulldogs run this season, Gainey and the Canadiens scouts have drafted 10, signed 7 as free agents, and traded for 2 since 2003. Of the other five, four were picks taken in the Canadiens previous regime led by Andre Savard. 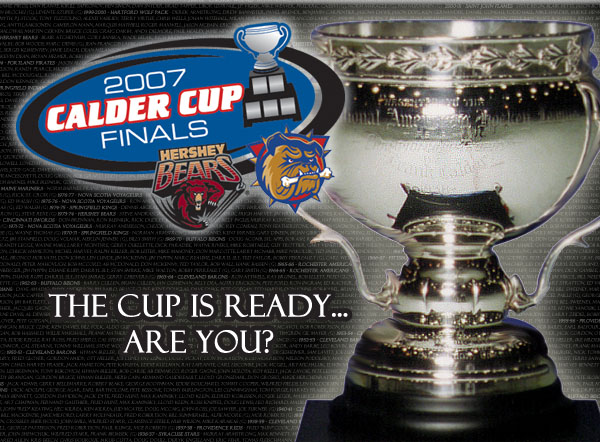 The drafted players are Carey Price and Matt D'Agostini from 2005, Kyle Chipchura and Mikhail Grabovski from 2004, and the top five picks from 2003, Andrei Kostitsyn, Cory Urquhart, Maxim Lapierre, Ryan O'Byrne, and Corey Locke.

A sixth draft pick from 2003 who did not participate in the Bulldogs 2007 run was goalie Jaroslav Halak, who has graduated to the NHL, for all intents and purposes, but was extremely key as the AHL's best regular season stopper until being called up by the Habs.

Of those 10 picks between 2003 and 2005, four have already tasted NHL experience, albeit in a part-time role. A fifth, Guillaume Latendresse who is not included in the 10, has never dressed for the Bulldogs, and has made the leap from junior to the NHL.

The seven free agent signings are Eric Manlow, Ajay Baines, and Danny Groulx from 2006, Andre Benoit and Francis Lemieux from 2005, and Jean-Philippe Cote and Yann Danis from 2003.

Defenseman Dan Jancevski and Matthieu Biron both arrived via trades in early 2006, while Zack Stortini, who is property of the Edmonton Oilers, has been retained from a previous association.

The signed free agents, as well as the two players who joined the team via trades, signify the veteran leadership the Canadiens have chosen to surround their prospects with. Most are career minor leaguers of character cast off by other organizations. Jancevski and Biron arrived via Dallas and San Jose, respectively through trades, while Cote is a former draft pick of the Maple Leafs who would likely be on the Canadiens had injuries not hampered his progression at crucial times.

The mixture has worked well for the Bulldogs, as the veterans have shown dedication, a hunger to win, and a willingness to teach the younger prospects, that has greatly assisted the teams goals.

This manner is in keeping with Canadiens tradition of bringing prospects along one step at a time, and has several parallels with the former Calder Cup championship teams.

This involves a cautious development of players, rather than rushing prospects highly drafted. Being taught what it takes to win cannot be measured, and who would know more about this manner than Gainey and the storied Habs?

As for the parallels, the most obvious has Bulldogs goaltender Carey Price in the role of Patrick Roy, unforeseen savior and hero of the 1984-85 Sherbrooke baby Habs. How about Kyle Chipchura imitating Brian Skrudland's leadership role in 1985. Maxim Lapierre, who is surely more capable in an offensive role than his numbers in Hamilton's playoff drive may suggest, dedicating himself to shutting down the powerful offenses of the Chicago Wolves and Hershey Bears, all in the name of being groomed for a similar role with the Canadiens. 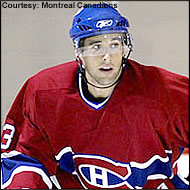 And then there is Ryan O'Byrne, who I will dare to compare to Habs legend Larry Robinson as a Nova Scotia Voyageur in 1971-72. 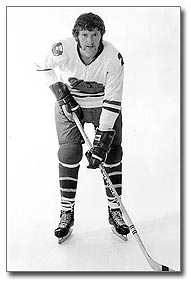 Robinson came to the Canadiens in 1971 as an awkward defenseman with undefined offensive potential. O'Byrne has none of that. His game mirrors the value players such as Rick Green and Craig Ludwig brought to the Habs, namely a solid stay-at-home type rearguard. A bruiser of renowned intimidation, if you will.

O'Byrne has the size and reach to become a very effective and feared NHL blueliner. All that's been missing from his career resume is games played. The offensive numbers of his past are to be taken lightly at best.

Robinson had one season of Junior A with the Kitchener Rangers under his belt, before joining the Nova Scotia Voyageurs for the 1971-72 season. That year, the Voyageurs had 13 rookies in the lineup, four of them on defense. O'Byrne has played less collegiate games in three season with Cornell than he has in one season with the Bulldogs. That type of learning curve is quite similar to Robinson's.

What greatly helped bring Robinson along, was the acquisition of NHL veteran Noel Price to the Vees lineup in 1972. Price was there primarily to teach, and the Habs might well owe him a debt of gratitude to this day, for what he helped Robinson accomplish.

Reading the Big Bird's autobiography, Robinson for the Defense, Larry makes no small consequence of learning from a veteran's teaching.

Jancevski and Biron's experience, in that light, have served to benefit O'Byrne greatly, who, through a season of ups and downs, has come to play the same role for the Bulldogs as did Robinson for the Vees in 1972: that of a feared defender.

O'Byrne has surely garnered himself a long and salivating look come the 2007-08 Canadiens training camp. As with many of the Canadiens prospects currently exceeding expectations in this final, further time in the AHL, tinkering with smaller details, may be required.

The parent Habs will look for more than simple accomplishment before graduating certain Bulldogs members to the NHL; they will look for AHL dominance, considering what a large and lengthy step the NHL can be for certain players.

There is a group of five or six Bulldogs who have earned this benefit, and most may see their promotions come in mid season.

First and surely foremost is goaltender Carey Price, who is by all means ready for the NHL. As the Canadiens are logjammed in goaltending talent, it may take a trade to make room for Price at the NHL level. My assumption is that the Habs must showcase Halak often and early to increase his trade value, or even his worth, should he perform better than Cristobal Huet.

Should both Halak and Price excel beyond Huet's performances, then even moving the solid Huet may not be out of the question.

Kyle Chipchura has likely robbed Radek Bonk of a return to the Habs next season. Simply put, he has exceeded expectations and deserves a promotion. His training camp showing will solidify his destination. Expect to see Chipchura tossed into pre-season action against the most complete and competitive of NHL lineups come late September.

Corey Locke will be given the most prolific of linemates to show what he is capable of come camp.That will be the promise Gainey will need to make in order to resign him. As a restricted free agent, Locke has the choice to bolt overseas should he not be given a feasible option with the Canadiens.

Matt D'Agostini will be a closely watched longshot to make the parent club next year. Should he miss the mark, he will not be off by much, and Habs fans can expect his arrival in Montreal at mid-season or in the following year. The kid has game. Time, combined with experience, will see him through.

Lapierre and Kostitsyn simply have to continue to do the good work they showed in the latter half of the season with the Canadiens to never see a Bulldogs uniform again.

As for the remaining crew of Bulldogs, another year of grooming can only help. For certain players on one-year deals, offers elsewhere and an increase in dollars, will bring them to other organizations. Of the four draft choices prior to Gainey's era, only Milroy may survive; but it will require a great training camp should he even be resigned. 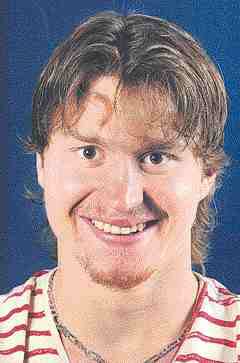 If the fate that is awaiting these players seems harsh and unfitting, considering the Bulldogs achievements. One must keep in mind that room needs to be be cleared for junior aged players such as Ryan White, Ben Maxwell, Ryan Russell, Sergei Kostitsyn, Pavel Valentenko and Matthieu Carle. 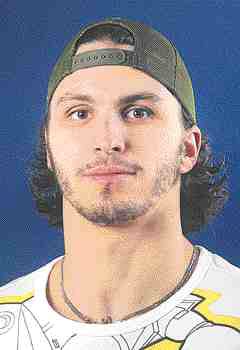 Seeing as how Gainey and staff are replenishing the Habs stock annually with crafty draft choices and smart signing, it cannot be any other way.

Rejoice in the Bulldogs success. It is the route to victory in the NHL as well.