Share All sharing options for: The Guy Lafleur Urban Legend 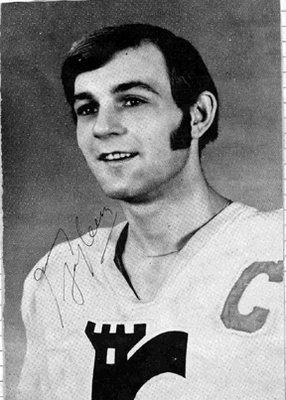 This is the one of the funniest hockey story I've ever heard! Funny, in many, many ways.

It is one of those, "It gets better with time" tales, and has to do with Habs legend Guy Lafleur.

I've been told it over and over again and have often repeated it myself. It goes back over 20 years ago, and has almost gained an urban legend status. The final line of the story is just precious, but might well be made up from partial truths and a certain amount of myth.

I'm posting this on the site a second time, edited, because I keep hearing the story over, with new added twists to it each time.

The person who was most recently putting a newer spin to this tale, is a well known person in my small town, so he remains without a name here. He swore up and down that his take on it was all 100% true, which made it even funnier.

The man's well known as a harmless bullsh*tter of sorts, always entertaining as his "truths" get a little skewered with time.

Another gentleman who was sitting at my table, works at a local arena, and unintentionally helped out with the added twist. He had his own Lafleur tidbit to share, centered around the arena, which I'll get to in a bit. It was upon hearing what he'd found, that the "embellisher" hijacked the details, and rolled them into his own twisted revisionist tale.

First I'll share the story here, as I've always heard it and was telling it to the guys.

It's about a near fatal car accident that occured somewhere around 1980. At the time Lafleur had an endorsement deal with General Motors and was often seen in TV ads hocking Chevrolets. It is told he received a brand new Caprice each year of the deal. 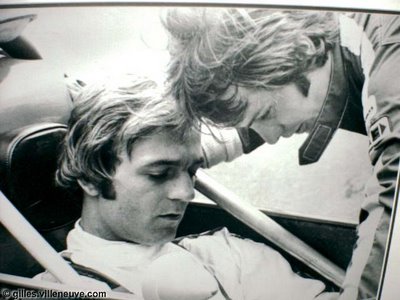 (This ain't no Caprice - it's Lafleur behind the wheel of Gilles Villeneuve's Formula 1 car.)

It was a well known fact that Lafleur's partying ways caught up to him one night in an almost fatal car crash. He'd often be out late, having a couple too many and then he'd proceed home via a Quebec backroad highway to get home. He was often stopped by the QPP, but never ticketed or charged. More than once, he actually recieved police escorts home, so I've heard.

At this particular time, Lafleur's fame and game were at a peak. Having 6 consecutive 50 goals seasons buys you some favor in your home province.

On this night, Lafleur was pretty hammered as he headed home, so much so, that he nodded off to sleep behind the wheel. Soon enough, his Chevy veered off the road and took out some fencing before smashing into a lamp post.

Police were quick to the scene and spotted the accident. Getting out of their vehicles, it's been told that one of the officers recognized Lafleur's car, running to it in fear the provincial hero was badly hurt.

As he approached the car window, he could see a post had penetrated the windshield and sat up against Lafleur's right shoulder. Lafleur's head was tilted to the left, his jaw slung open some, with no sign of blood other than small cuts from the shattered glass.

He was unconscious. Or dead!

The officer panicked and began shaking Lafleur's shoulder hoping in fright that he'd not left the world for good.

"Guy, Guy, wake up, wake up", he said, jostling him lightly.

To his surprise Lafleur, while totally dazed, came out of it straight away.

He raised his head to look at the officer bleary eyed, and asked in all innocent liquored sincerety, "Did I score?"

That was the way I'd always heard it told, and told it myself, until now.

The new wrinkle in it, played its way into the conversation from the arena worker, and led to the other friend, he of the wild imagination, claiming the "Did I Score?" line had to do with Lafleur getting knocked out cold during a game in his youth - just as he scored!

"This oughtta be good!", I thought to myself. While I can recall hearing about a goal something similar to that years ago, I'd never heard the "Did I Score?" line attached to that extension of it. The story of the crash has been told as Lafleur folklore and is mentioned in certain bios, though his drunken question has never been substantiated. At least, not in the two autobiographies I've read.

I have my doubts that such a line could attributed to a goal that Lafleur scored in his youth.

Especially considering that this particular goal, that my story shallacking buddy is making reference to, is attributed to a 1965 Pee Wee contest, a good fifteen years prior to the crash.

The way he is now telling it, puts a hometown tilt to it, as well. It's also where the manure starts to permeate his take on the tale. 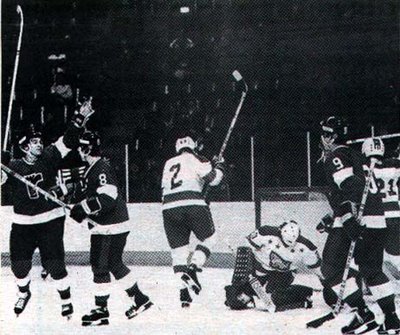 Rink Rat had worked at local arena for years since his youth, driving the Zamboni and doing odds and ends.In the mid 1960's, Lafleur played a few contests here in Cornwall, usually in the context of Atom, Pee Wee or Bantam tournaments.

Lafleur's coming out party was the Quebec Pee Wee Tournament, which is to this day still, a huge event. Lafleur single handedly tore up the scoresheet with twenty-something goals in five games. National attention was soon to follow. It was not long after that event that Lafleur played here in Cornwall.

At one of the two arena's in town, the Bob Turner ( no relation to the former Habs defenseman ) Memorial Center, the boys minor hockey league was run by the same group of people for close to 25 years. In the arena, the stands on one side stretch about 15 rows high, and beneath them are rooms that had not been used for decades due to a renovation project around 1970.

Under these stands, in a type of concierge store room, were broken down skate sharpening machines and lots of collected junk. The room was a type of long corridor that stretched almost the length of the ice, and had several sections to it. Electrical wire was strung all over from renovations past. The place was so littered with old junk that no one dared to venture into the dark and dusty, not to mention dangerous, area. It soon became a forgotten dungeon of disarray and broken old hockey sticks.

One day, in the late 1990's, the house league president got curious. As he was prepared to finish up his career in the rink, he decided to check out under the stands to see what he could find. It had been itching at him for years. He'd been told that the trophies that no longer had a place in the arena's main showcases were once stored there. Forgotten there! 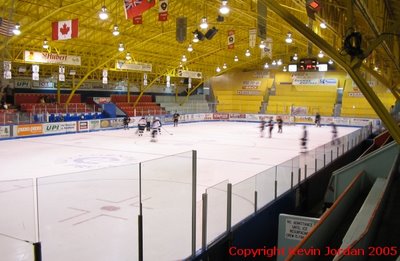 But it was such an unsightly mess, he got Rink Rat on the job of cleaning it up.

Armed with a searchlight and hundreds of feet of extension cord, he threw on an old jacket and a hardhat, ready to star in Indiana Jones and the Lost Hockey Relics.

After spending a good two hours coughing up dust, he landed a half dozen old trophies. Once out of the rubble, he got to cleaning them off and discovered that one of the trophies had been awarded to Guy Lafleur.

Lafleur's name was the last plaqued MVP name on a half filled Cornwall Pee Wee Tournament piece of hardware.

The trophy was no masterpiece of creation. The wood had rotted badly and the metal plates were rusting, damaged and bending from time in the cold.

To him, finding it was priceless. He's kept the league from knowing about it for years and promised to let me see it one day, but there was no way he was going to sell it off.

I still have yet to see it.

As Rink Rat was finishing this bit of storytelling, our conversation partner was looking slightly agitated, as if he had something to add that could not remain inside of him for very long.

We listened with BS detectors on alert, and let him chime in.

This tale started out totally fact based, I'll give him that much!

He was telling us about a game played at what was once called the Water Street Arena in the 1960's. The WSA is a 70 yr old structure that leaks from the roof today and is one good winter storm from being condemmed. It's where the Cornwall Colts presently call home.

Lafleur was there in the mid sixties with a team from Rockland and their tournament opponants were a team from the Ottawa area. The Ottawa team was a hapless bunch made much better by a forward / defenseman named Larry Robinson. The "Big Bird", as he was yet to be known, was doubleshifted most of the game at both positions. 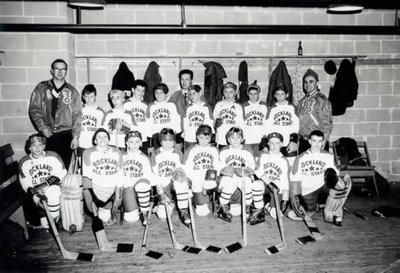 (Lafleur is in the second row, fourth player from the left)

The game in question has been mentioned in both the Lafleur books I've read, as well as the "Robinson For The Defense" autobiography. Mentions were made of the game, merely in passing, as they were on that day, each teams best player, and it didn't really connect with the two stars until both were playing for the Montreal Canadiens almost a decade later.

Not surprisingly, neither book refers to what my storytelling friend was to allude to next.

During the game, which he says he was at, (oh yeah, let's see a ticket stub!), Robinson was nothing but a mere goon put on the ice to run Lafleur down. He said that Robinson's skating was rough, but his long legs allowed him a certain speed. Catching a youthful Lafleur was in his dreams. 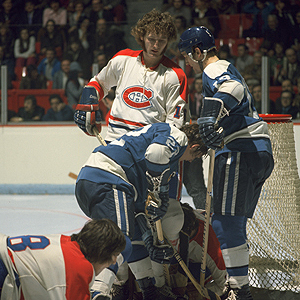 Towards the games end, which Thurso won handily, Robinson, I am told, nailed Lafleur with a shoulder to the head, as he stood creaseside poking at a rebound.

The hit supposedly knocked Lafleur cold ( ! ) and it is upon him opening his eyes that he supposedly uttered the infamous "Did I Score?" line.

That would be too good a story not to tell - if it were true, and I suggested as much to my unfazed, tale stretching friend - but no book I've read in my lifetime ( yes, lots of 'em ) makes mention of this. Then again, the man has a huge nose!

Sometimes it's a fine line between legend and fact, myth and truth. It gets finer as stories blur, get stretched, forgotten and generally more detailed with age.

Still today, I know of only two things concerning the Lafleur crash story. One, he did smash his Caprice into a lampole, surviving with just small injuries. Two, the whole mess still makes a helluva good joke going on thirty years.

Now I have a magazine photocopy, from a rock star memorabilia auction, of Bruce Springsteen's California drivers licence. Next time I enjoy a coffee with this fellow, I just gotta tell him the one about the time the Boss and I drag raced for pink slips!