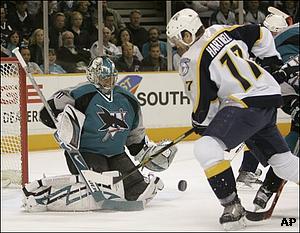 It would take something that pisses me off badly for me to write my first non - Habs post in weeks.

Seeing as Scott Hartnell was my hoped for free agent signing for the Canadiens, it is not entirely unrelated. I'll just trash the Hartnell to Habs piece I was in the middle of.

Something really stinks about a deal like this. I can't imagine how a league that needs to keep it's integrity intact can allow it.

On the NHL Network / TSN site this afternoon at 2:30, this breaking story from Bob McKenzie appeared"

The Philadelphia Flyers have dipped into the free agent market a little early, thanks to the Nashville Predators.

Because of Nashville's uncertain ownership future and an expected tight budget in the coming year, the Predators arranged with the Flyers to give them exclusive negotiating rights to two coveted free agents - defenceman Kimmo Timonen and forward Scott Hartnell.

Sources tell TSN the Flyers have signed both Hartnell and Timonen to long-term contracts.
Hartnell, who was scheduled to become a free agent on July 1, signed with Flyers on a 6-year, $25.2 million deal for a cap hit of $4.2 million per year. The Flyers also agreed to terms with Timonen on a 6-year, $37.8 million contract for an annual cap hit of $6.3 million. 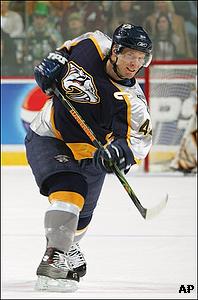 In exchange for giving up the rights to the two free agents the Predators knew they would not be able to sign, Nashville received back its own first round pick that it gave to the Flyers as part of the Peter Forsberg trade.

Now something really stinks about a deal like this. I can't imagine how a league that needs to keep it's integrity intact can allow it.

I understand that the players involved had no obligation to sign (like either would refuse a 6 year deal!), but it's basically firesaling and hurts the leagues image.

There should be no trading of impending free agents that give one team more opportunity to negotiate with players than another.

It gets real scummy when all that Nashville gets in return is something that was theirs to begin with. Watch Philly resign Forsberg now that their team has just become more competitive.

Could draft day soon become a frenzy for trading impending UFA's away for picks?

On June 15, 2001, Montreal acquired the rights to Joe Juneau similarily before July 1 from Phoenix , for future considerations should Juneau sign. Prior to the lockout, the Canadiens also sold the rights to Stephane Quintal to Los Angeles prior to July 1 as well. Both transactions were minor deals using this exact same method. Neither, however compromised the ideal of what a transaction is supposed to be. The fact that there is no longer compensatory draft picks for teams that lose free agents likely enables this type of scam. Nashville, with the loss of these guys being imminent, could no longer fall back on the sandwich picks they would normally be entitled to under the old CBA.

The league ditched the compensatory picks when an abundance of teams make a mockery of the rule.

I realize this trade by NHL rules is legal and not entirely precedent setting.

There are many details that we do not yet know of concerning this, such as were the 2 players shopped at all. , I would imagine that a better offer could have been obtained.

The beef is with NHL and the perception of lost integrity.

Paul Holmgren looks brilliant for pulling it off of course, as would Gainey had he done it, but that's not my point.

The nature of a trade should have to with aquiring an equal value that a team uses to go forward with, or in the least is value for value in its intent.

In this case, it is neither of those, and that's why I find integrity being compromised.

Teams retain the right negotiate with impending free agents due to a loyalty presumption and not to seek gain when the future looks grim.

It also looks like Nashville's going out of their way to tank season ticket sales to kick the relocation clause in their rental lease into effect.

While it may all legal, it surely isn't right.