Share All sharing options for: 2007 NHL Draft: Draft day fun with The Subbanator

You just gotta love P.K. Subban, the Belleville Bulls defenseman who was the second of six rearguards taken by the Habs in the draft this past weekend.

Subban has earned the moniker "The Subbanator" for his outspokeness and quotability. He left an impression on everyone it seems and was beside himself with joy at being selected by his favorite team.

No sooner did he have the Habs jersey pulled over his head when his exuberance shone out loud. He wasted little time in declaring that not only would he make the Canadiens come training camp, he had plans for his own personal day with Lord Stanley's mug all in order. 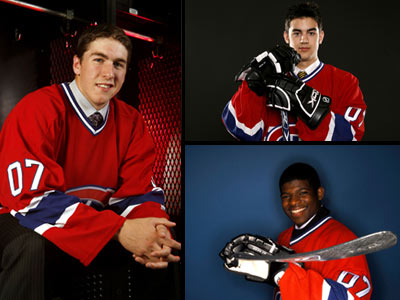 When Subban declared, "I want to bring another Stanley Cup to Montreal and then bring the Cup back home, parade it through the streets of Toronto and let all the kids touch it", the room just fell apart.

The Etobikoke native wasn't a Leafs fan for long. "I started as a Toronto fan but my dad is the biggest Montreal fan in the world," said Subban. "You walk in our house and there's Habs flags everywhere.

"So I ended up growing up a huge Habs fans. This is truly amazing."

Canadiens scout Trevor Timmins is quite high on Subban, professing that he will be without doubt the fastest player in camp.

From the scouting reports I've read so far, Subban's skills are not in question. His offensive game and his speed are raved about, while his defensive liabilities are suspect. From the soundboards of Bulls fans, it is told he is often prone to foregoing the safer route in sacrifice of an up ice rush - a trait not uncommon in eager and skilled youngsters.

One thing is for certain, his enthusiasm is awful contagious, already drawing one comparison to Jeremy Roenick, for better or worse. Time will tell whether this talented youngster can reign in his instincts for the more subtle aspects of the game.

Upon researching info on Subban, I came upon an interesting site called P.A.S.S., which is a summer hockey camp. I'm not sure what the initials stand for, but the site featured P.K. in their Student Spotlight section as a player with ...get this...the North York Canadiens!

The picture below shows Subban as a Novice AAA player and I'm guessing he was all of 10 or 11 years old at the time. The short bio makes it sound as thought the P.K. we are just getting to know has been this incredible character for quite some time. He'll be a refreshing treat!

"P.K. is a highly skilled novice who has attended PASS for four years. A player with exceptional desire and drive, you can expect maximum effort from P.K. when he is on the ice. A third year novice playing his first season of AAA, P.K. enjoyed winning the MTHL Carnation Cup with the Canadians. A versatile player, P.K. plays forward and defense, and is an asset to the team in either position. P.K. is an excellent student who takes his studies seriously. He enjoys art, math and reading. P.K.’s goal is to play in the NHL and to be dentist when he is finished playing hockey. In the summer, P.K. enjoys outdoor sports, including basketball."

In the oddities category

One of the fun parts of the NHL Entry Draft for me is hearing the great stories from past drafts. Someone, I forget who or where exactly, made mention of this tale. I'd heard this one long ago and figured I'd look it up.

It occured in 1974 when the event was titled the NHL Amateur Draft. Back then the draft was along and drawn out affair, sometimes lasting past 20 rounds. Seems as long as managers were still choosing players, the process would continue. On occasion, the day would end with one team picking several players in succession.

An example of this happened in 1978, when the Canadiens used picks 229 throught 234 to select the six final picks of the day. It seemed a fruitless exercise to many, however the Canadiens managed to unearth two future NHL'ers with those picks - Louis Sleigher and the one and only Chris Nilan!

In 1974, however, Buffalo Sabres general manager Punch Imlach became restless with the time consuming unfoldings, and protested it in a unique manner.

Using pick #183, Imlach selected Taro Tsujimoto of the Tokyo Katanas. Everyone thought that the Sabres had uncovered a new talent base from across the ocean.

The surprising pick delayed the draft some, and it was only after an attempted check a week later was it discovered that the player was in fact inexistant.

Imlach was found out and later revealed that Tsujimoto was a waiter in a Japanese restaurant that he and the teams owners had visited the night before. "Katana" was actually the Japanese word for a saber! It sounds like they had it all planned and had succeeded in getting their point across.

Every year after the draft ends, when I'm all done pondering the hits and misses of day, I scan down the list of 7 rounds of players looking for the funniest and silliest sounding names. There's always a bunch of them, and while this year is maybe slim talent wise, it's a banner year for those kinds of names that will either become an editor's nightmare or journalists and publicists dream.

If but half of these players make the NHL grade, the puns and witticisms will be endless. Here are some of the better ones, to which I added the first thing that came to mind.

Matt Rust: No one's been at his door in a while!
Ryan Thang: Does his crash and bang thang!
Maxim Gratchev: Extreme case of Russian jock itch!
Ryan Molle: Too soft for the NHL.
Paul Posta: Goes postal!
Ben Winnett: He won't Winnett in Toronto
Ben Blood: First member of Blood, Sweatt, and Turris fantasy hockey line.
Bill Sweatt: The only sweat you'll find on new Reebok jerseys.
Kyle Turris: A Turris attraction for Phoenix
Zack Torquato: Coolest name in the draft after Max Pacioretty and Ben Blood
Linus Omark: Siblings are named Snoopy and Rerun.
Patrick Maroon: Could be on an NHL version of Survivor or Lost
Tyson Sexsmith: Blacksmith, locksmith, sexsmith; which trade would you like to master?
Luca Caputi: Caputi goes kaput!
Nick Eno: Throws up before every game!
Ryan Gendur: Gendur bendur!
Trevor Nill: Not much chance!
Trevor Cann: A little better chance!
Jake Muzzin: Things are buzzin' with Muzzin
Oscar Mollar: Hope he's got all his teeth!
Luca Cunti: Headline nightmare in the fine tradition of Corey Pecker and Yataka Fukufuji.
Cade Fairchild: Wasn't Kate Fairchild an actress?
Cody Almond: Coaty? Sounds like a delicious snack.