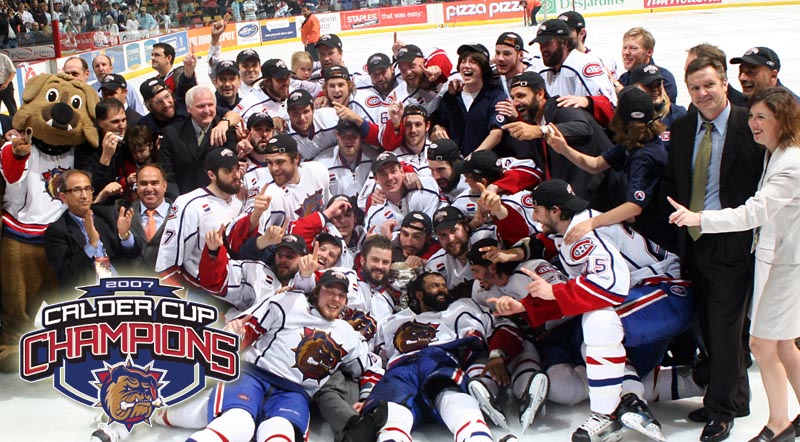 If you listen closely, you can hear Bob Gainey smiling!

The Hamilton Bulldogs have done it: defied all odds and won the 2007 Calder Cup!

They edged the Hershey Bears 2-1 tonight to take the series.

It took a mere five games for the aptly named Bulldogs to dispose of the defending Calder holders, the Hershey Bears, and I can imagine that the Winnipeg Free Press' Randy Turner is munching on a toasty platter of crow right about now.

Turner, as everyone recalls, had the mental lapse and audacity to suggest that the Canadiens were hampering the Bulldogs chances by saddling them with Carey Price. Imagine that!

Turner, who became defiant upon rounding criticism, defended his position with all the verve of an nine-year-old schoolyard bully. He hasn't the credibility to be working in sports journalism — simply put, he's a classic fool! 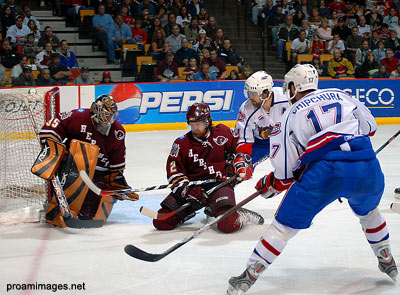 Price's addition to the Bulldogs boosted the teams chances big time. He played huge games for Hamilton while clearly serving notice that he is in fact ready for the NHL. Price consistently won, while the team was outshot, on the road. He didn't steal his MVP award by any means.

A decision, and an unselfish one at that, by Maxim Lapierre to return to the AHL was also key and he played a big role in the final game with a goal and an assist to pace the team to victory.

All Bulldogs players contributions were noteworthy as they dug deep in upsetting four favored opponents. With Price's heroics to backstop them, defensemen and forwards alike were able to place all focus on their roles as team players. Price could well have the same effect on his Canadiens teammates, starting as soon as next season.

All players gained in experience with this championship and the confidence of being winners will assist them greatly in their career paths. 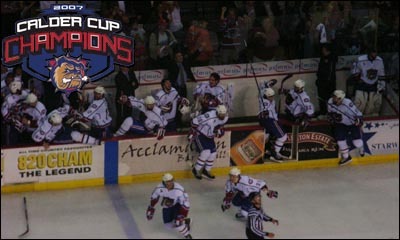 As with any winning team in the AHL, this squad will be split up come next October, with some players joining the Canadiens ranks and others moving on to other AHL destinations. Bulldogs players who will become free agents will be highly sought after now that they are proven winners. Players who do not figure highly into the Canadiens plans of the future will go where they are wanted most.

It is my hope, as I will most definitely be following the Bulldogs more next season, that the team is able to retain certain vets simply for experience sake. Ajay Baines, hero of the final game, and Danny Groulx quickly come to mind as players who can be positive influences to the younger generations arriving annually. Mathieu Biron and Eric Manlow are two others for whom room could also be made for. 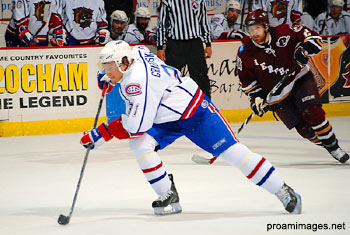 One also has to feel for Yann Danis, a goaltender who much good has been said about. Danis has consistently plied his trade under the radar, starting with my hometown Cornwall Colts of the CJHL, before moving onto the collegiate ranks. From there he was signed as a free agent by the Canadiens and was quite a discovery. Since becoming a Bulldog, he has done nothing but work hard and improve. His only fault is none of his own. He was simply overshadowed by a pair of goalies in full flight to greatness and it is a credit to him how he has handled it all without making himself a distraction. It is my belief that he will become an NHL goaltender within two seasons.

Four Bulldogs will get a shot at making the Canadiens next season. If you allow that Lapierre and Andrei Kostitsyn will be with Montreal, you can pencil into the starting lineup the names of Carey Price and Kyle Chipchura. Both players have little learning left to do at the AHL level, and can benefit more from NHL experience at this point. Some can argue that Price may be kept in Hamilton until the goal crease logjam in Montreal is cleared for him to step in. 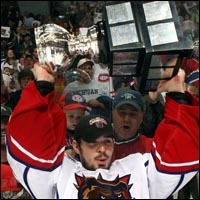 I say if he is ready, he's ready; play him and let the chips fall where they may. Our goalie of the future can handle the challenges and road bumps of NHL life. He has the mental capacity and moral strength to deal with whatever comes his way. His time is upon him now.

Chipchura has often been billed as a feisty defensive forward with great leadership skills in the mold of Bryan Skrudland. Chipchura has delivered in his role and has shown even more offensive upside than expected. The next stage of his grooming should be against tougher competition.

Ryan O'Byrne will be a Canadien in 2007-08, whether it be in October or in March. His game has grown greatly as he rode over the bumps of learning the pro game. In a season where he played triple the amount of games previously played at any time in his career, he improved as the season went along, to the point of being the Bulldogs all-purpose D-man come the Calder finals. 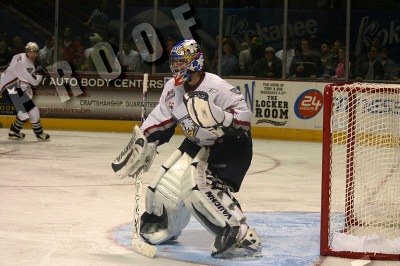 Corey Locke was clearly a player with something to prove this season. While his regular season was no challenge for skeptics who mentioned size issues, his playoff performance was above all expectations. Considering he was switched to the wing and then led the team in playoff scoring make his exploits all that much more remarkable. He has earned — and deserves — a two-way contract and an honest shot at making the Canadiens. The rest is in his hands.

Mikhail Grabovski is my long shot choice for the NHL next year. I am not totally convinced he is ready until he begins to dominate the AHL. It is in him to do so, and experience may be all he needs.

There may well be another Bulldog candidate for the big leagues, who, bolstered by the experience of winning the Calder Cup, will arrive at camp more confident and secure in his game. He could surprise, defy odds, and reveal something new to management that opens eyes and clears paths. That player could be Matt D' Agostini, Duncan Milroy, Dan Jancevski, Andrew Archer or Jonathan Ferland.

All taken together, the fermenting brew of Bulldog talent will surely make its mark on the Montreal Canadiens next season. With all these prospects pushing up, pressuring veterans into more solid and consistent efforts, it can only have a positive effect on the Habs.

Summary at the Dogs site
Dozens of Hamilton Bulldogs season highlights courtesy of You Tube.