Can the Canadiens pass Esposito by?

Share All sharing options for: Can the Canadiens pass Esposito by? 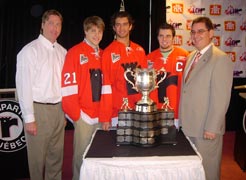 Translated from an article by Martin Leclerc in the June19, 2007 Le Journal De Montreal

In the minds of many people, Montreal born Angelo Esposito's destiny was to have been played out at this Friday`s 2007 NHL Entry Draft in the form of a first overall pick.

Along the way, the scenario has greatly changed, but the talented Esposito isn't letting his fall from top spot be the story. Life is about learning, is it not?

Espo, as his teammates call him, will be in Columbus this Friday night. He is ranked as the eighth best North American prospect. In mid season however, it was thought he was the best 17 year old hockey player in the world.

In 2005-06, at 16, the Quebec Remparts center aquired a legion of admirers after posting 39-59-98 totals. This past season, he was expected to tear the QMJHL apart but his totals dipped to 27-52-79, and that had everything to do with why his ranking parachuted to the 8th position.

"I tried to do too much myself. Hockey is team game, and I learned a great deal in that regard this season."

"Patrick Roy helped me out alot in this area and I feel I've reached a new chapter in my game. I learned to play with the team and forgo trying to do it all by myself."

During the weeks that precede the draft, NHL team officials involved in the interview process with the prospects plave a great measure of importance on the one on one interviews they conduct. Esposito's honesty surely impressed many.

"These meeting usually last between 30 and 45 minutes. We speak with team officials who are simply trying to get to know the person you are. They ask alot of questions about family and background and it's all done very socially."

"In these reunions, I'm not attempting to give them the answers I know they want to hear. I just try to be myself."

Esposito is the second of three children in his family, one that doesn't tolerate compromise when it comes to efforts or results.

On top of being a mature young man, he is also a team oriented player. On the U-18 team his was given the team captaincy. During International games or All Star games, teammates have remarked that they enjoyed his company as a player as well as a person. 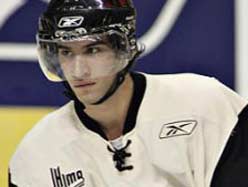 "I see my former teammates and the hard work and effort they are furnishing. I see the success they are having and I know it's within my reach to do the same" he confides.

In the summer months, Esposito sometimes trains with the player he admires most - Vincent Lecavalier. The Rocket Richard Trophy winner's brother Philippe, is his agent. Their on ice workouts are in Rosemere, and several NHL'ers take part.

"I really like the way Vincent plays the game. He's become one of the best in thegame over the course of years. I'm very fortunate to know him."

On the ice, Esposito certainly posseses all the tools required to be a star in today's NHL. It's unanimous amongst scouts that he owns superior skating skills.

In speaking with him, it doesn't take long to realize that his personal qualities are just as impressive.

Here, we have a young man who left home at age 14, unweary of what he was setting out to accomplish. He was never afraid of responsability, he's capable of admitting error, and is recognized with leadership qualities by those who have sought to surround him so well through these years.

It will be curiously interesting to see what the Canadiens do should Esposito still be available by the 12th choice!