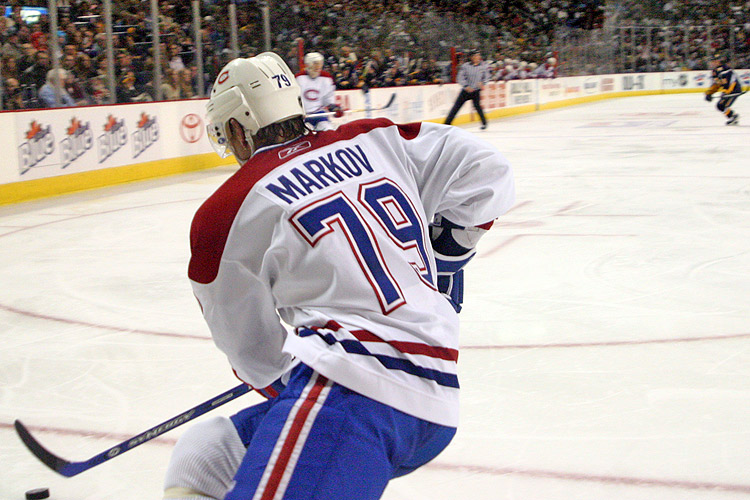 Market values being what they are, a $5.75 million per annum salary to a defenseman who is often considered underrated will confound many a Habs and / or hockey fan.


Steve Simmons of the Toronto Sun chain, jumped the general consensus this past weekend at the notion Andrei Markov would be nearing a mere five million per. His comment was, "When did John Ferguson Jr. become the Montreal Canadiens General Manager."

Simmons, who I generally agree with, termed Markov "soft".

Since Simmons only watches Markov eight times a season in all likelyhood, I'll swing with Ovechkin's assessment - especially considering we've been watching Markov going on seven seasons now, knowing he was one of the NHL's best kept secrets for quite some time.

As for the soft label, has anyone ever made notice of Nicklas Lidstrom's penalty minute total?

The perenially effective Norris Trophy Red Wings candidate has often been mentioned as the rarest of Lady Byng candidates among defenseman, but he has never been called "soft".

Now don't get me wrong, I'm not ready to compare Markov to Lidstrom in any way. I'm just making the point that certain impressions, without astute study, can be deceiving.

It can be agreed, however than both Markov and Lidstrom are their respective teams blueline generals.

While many in the know have suggested Markov to be an underrated quantity, he can no longer be esteemed as such with the salary he will now receive.

Bigger demands will unfairly be placed on him and he will be compared to other past successes and failures based primely on contract dollars.

My take is that if Markov continues to give the Canadiens exactly the same game and progression he has allowed us to become used to - the deal is a good one.

The main snag in judging Markov next season may have much to do with whether Sheldon Souray resigns with the Canadiens, or is lured away by a delicious and irrefusable offer from another team ready to gamble free agent dollars.

Many of Markov's assists came 50 feet away from the Souray PP blasts, and should Sheldon take his act elsewhere, Andrei's production drop can be predicted.

Such an eventuality won't mean that Markov is playing a lesser game.

Should he be teamed with, say Mike Komisarek on the PP, will he match his total of 43 assists?

Raise your hands, those who think so!

Uh huh! No high five's in the room to be seen!

What Markov will continue to do for the Canadiens, is what he has always so subtlely done.

He will rarely be caught out of position, remain practically unbeatable one on one, make that pefrect pass out of the Habs end in transition from defense to offence, and anchor the powerplay regardless of who is in on it.

Asking more of him may well require better teammates, and the Russian defender hardly controls that aspect.

Markov makes the rare mistake, but according to salary, will now see his goofs magnified and analyzed beyond the norm because of the salary he is earning. That all comes with the new money territory, unfairily.

The conviction of a player from his nation will also come into question, as the Russian has surely witnessed the burning at the stake media's frying of countrymen Samsonov and Kovalev, well deserved as they were.

Remember that our Andrei never flinched in maintaining exactly where he wanted to play in the coming years. He did not use, as so many others do, the July 1 free agent payoff date as any sort of paydirt leverage.

In true team fashion, he settled his deal at the earliest possible date, considering an injury, for the best interests of the team. Had this contract negotiation dragged another 40 days, all hellbound scenarios for the 2007-08 Habs would be laid at his feet.

Truly, we've never known Markov very well. He says very little, and when considering his Russian counterparts talkative ways, that may be a good thing! We may now know him better, through his intentions, his being forthright, and his his dedication to our team and its ultimate goals.

He's spoken all he needs to. It's now up to us fans to shut up.

Markov will earn every dollar of this new deal, if we just let him be himself.