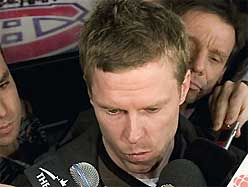 According to today's Journal de Montreal and TSN, Canadiens captain Saku Koivu recently underwent cataract surgery to repair a condition in his left eye that resulted from an injury suffered one year ago against the Carolina Hurricanes in the first round of the 2006 playoffs.

Le Journal gave no details of the Koivu operation while mentioning that defenseman Sheldon Souray and Andrei Markov are also both on the mend. Souray recently had shoulder surgery while markov recently suffered damage to his knee that is requiring him to visit Montreal doctors for further assessment.

If you can drink a six-pack of Canadian and say "Sheldon Souray shoulder surgery" real fast five times - you're a better man than I.

The Montreal paper also states that unsigned prospect Sergei Kostitsyn, who is on a tryout contract with the Hamilton Bulldogs is receiving contract offers to play in Russia next season. The Canadiens have until June 1st to sign Kostitsyn or he will be elligible to re-enter the draft. The younger Kostitsyn was the third leading scorer in the OHL this season with 40-91-131 stats with London Knights. The maximum contract the Canadiens can offer him under CBA regulations is estimated near $850,000. Considering the offer recently snapped up by former Hab Alexander Perezhogin, Montreal could be in tough to negotiate with the Russian prospect.