Share All sharing options for: Links: Jean Perron looks back on Patrick Roy 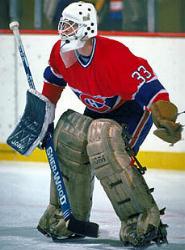 Former Canadiens coach Jean Perron, a controversial and often outspoken figure in the teams history, reveals what was going on behind the scenes as Roy was making his entry into the NHL. I must have missed this piece the first time around when Roy was inducted into the HHOF. I found this one while doing some seemingly endless research on the history of the Canadiens goaltenders, which I will hopefully have more to post on soon.

(One fact Mr. O'Connor got wrong: Lemaire resigned, he was not fired. His distaste for the media has been well documented since that day. Another fine example of a misinformed Toronto-based journalist playing history revionist with Habs facts! I couldn't let that one go by!)

With so much playoff action to watch, the postings here have been scarce in the last week or so. Throw in a string of nightshifts and this site gets backed up a bit, as far as being up to date goes. I won't begin to even attempt to detail what's been going on with the other eight teams still playing - those teams' various bloggers can share that load well enough. I may pop in with the odd piece once the final four teams are known. As for now, posts on the Habs will still rule the day.

I have been keeping my eyes open for things that are "off the beaten track." For issues about the Canadiens prospects, the Kovalev scandal, the Hamilton Bulldogs ascent to the Calder Cup, and details of contract negotiations, sites such as Current Habs History And Opinion, Habs World, and Habs Inside Out have all the bases covered - no need for EOTP to become redundant on those fronts.

After checking out Perron's look back, have a laugh with sites that post his twisted expresions in both official languages. The man is hockey's version of Yogi Berra! I've also found a Guy Carbonneau tribute site, that covers his career from his days in minor hockey up to the present. For playoff hockey fans with a taste for the historical side, Joe Pelletier's Legends Of Hockey Network has revived a classic Hockey News piece from a few years back. If you ever wondered who deserved winning the Conn Smythe trophy before it's introduction in 1965, this well researched piece is a treat.