Habs New Practice Facility A State Of The Art Endeavor

Share All sharing options for: Habs New Practice Facility A State Of The Art Endeavor 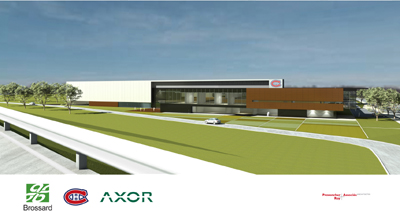 To take the word of Julien Brisebois, the Montreal Canadiens vice president of hockey operations, the Habs new practice rink and fitness center will become the envy of the league.

Gone are the days of Canadiens players pulling down tuques over their ears in minus thirty degree weather to trod onto cross town buses in full equipement for practices. The unsightly inconvenience of shuffling the team when a booked Bell Centre conspired against practice time will be a thing of the past starting with the 2008-09 season.

According to Brisebois, who isn't lent to bragging easily, the Habs new digs in Brossard will go above and beyond those already prominant in the NHL in cities such as Dallas, Philadelphia, San Jose, Washington and New York, as well as an NFL facility set up for the Tampa Bay Buccaneers. Brisebois, the team's brass, and a group of architects studying the project made the rounds this past winter and took note of each facility had to offer and have come up with a design and layout that is said to be state of the art.

What they had in mind was a complex of such a magnitude that it would become a feature selling point to players considering Montreal as a possible destination for their hockey careers.
Brisebois suggests that word will quickly spread throughout the league of the training facility's edge.

"When our players speak of this building throughout the league, and visiting players come by", says Brisebois, "we want them to be stunned by what they discover. Whether it be practices, training, or any of a number of projects, we want to send the message that things are done first class. That is of prime importance to the players."

Different scenarios were studied from the outset, such as housing a junior team. The idea quickly fell to the wayside upon discovery that the 7000 seat minumum required by the QMJHL would almost double the cost of the project. In the end it just wasn't feasable. The design of the complex would have been compromised beyond the Habs needs.

Without divulginging finite details of the plans, Brisebois told of the many advantages to the team in spending the $30 million for the complex.

For starters, players drenched in sweat from a hard day's workout at the nearest available arena will no longer be boarding buses in the cold to return to the Bell Centre for showers in mid-winter in what Bob Gainey stated was a teams routine since the 1950's.

Gainey's expertise in carrying out the project was vital, having experience the building of two such complexes in Dallas - one when the Stars first arrived from Minnesota, and another during Gainey's last season there.

The GM mentions that one of the better advantages is actually a secondary benefit to the overall idea. Younger players wishing to remain on the ice longer in order to work with coaches no longer have to hurry off to make the bus in time.

Another positive factor is the Brossard location itself. The majority of the teams players live on Nun's Island or downtown Montreal, which are within 10 kilometres of the Brossard site. The team flies out from the airport in St. Hubert, also a short skip away.

While Gainey prefers to keep his own headquarters at the Bell, coaches will all have their own offices and areas in Brossard which facilitates traffic and contact between players and coaches after practices and training.

Perhaps the biggest upside has to do with the access the new complex provides. The Bell Centre is rigidly placed in a downtown area where space is not wasted. It is hardly an environment that lends itself to easy fan access on non-game days. In Brossard, there will be seating for just under a thousand fans for both ice pads. The Canadiens will use this fact to hold more practices that will be open to the public.

Gone will be the Sunday treks to Verdun, where scheduled games and skating were often cancelled at the last hour to make room for the Canadiens to hold practice. Gainey says that often the Canadiens opted not to practice because they felt it wrong to continously bump the arena's timetable for their benefit.