Gainey Has Alot On His Plate For The Summer

Share All sharing options for: Gainey Has Alot On His Plate For The Summer 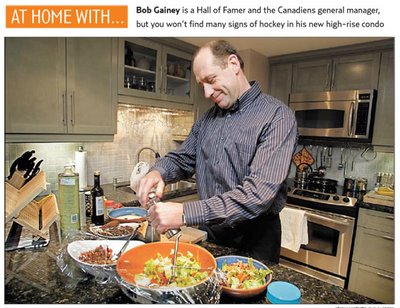 RL Note - Pardon the photo's intended irony, this James Murphy piece, while mostly up to date, speaks of the task ahead for Habs GM Bob Gainey. Aside from his Canadiens duties, the Gainey Foundation was launched today benefitting charities close to family's heart. It is set up in honour of Gainey's late wife Cathy and daughter Laura, who perished at sea, last December.

While missing the Stanley Cup Playoffs is difficult for any NHL team, in Montreal, a no-show in the postseason is simply unacceptable and the reasons for such failure have been and will continue to be dissected until the puck drops on the 2007-08 season.

"In a nutshell, a lot of people bought into (GM Bob) Gainey’s five-year plan and didn’t expect a step back in year three," Team 990’s hockey reporter Tony Marinaro said. "To the Montreal fans, not winning a championship has always been considered a failure, but when Gainey came in, people seemed to jump on board and pledge their patience. But now, they’re wondering if that was the right move and they will try to figure out what went wrong all summer."

Following the Canadiens' loss to Toronto on April 7, which eliminated Montreal from playoff contention, the questions began immediately. One of the main debates was why Gainey stood pat at the Feb. 27 trade deadline instead of adding to a team that he himself felt had a chance to make the playoffs?

There were some marquee players available, Keith Tkachuk, who moved to Atlanta, Bill Guerin dealt to San Jose, and Ryan Smith, traded to the Islanders.

Montreal made only one notable deal, trading defenseman Craig Rivet and a 2008 fifth-round pick to San Jose for defenseman Josh Gorges and a first-round pick in this June’s draft.
To add salt to the wound, Rivet has become a key piece of a Sharks team up 2-1 in the second round of the Stanley Cup Playoffs. Following the season though, Gainey stood by the Rivet trade and lack of movement at the deadline.

"In February, I felt like there was an imbalance on our team and adding new players like a Keith Tkachuk, Ryan Smith, or whoever was available at the time couldn’t straighten us out, we had our own work to do," Gainey said.

Throughout the season there was constant speculation that Rivet, along with fellow unrestricted free agent defensemen Sheldon Souray and Andrei Markov would be dealt since the Canadiens would not be able to fit all three under the salary cap. Gainey decided keeping the latter two would be the best move for this season’s squad and now faces the chance of watching both Souray and Markov walk for nothing.But the Canadiens GM still stands by his choice. 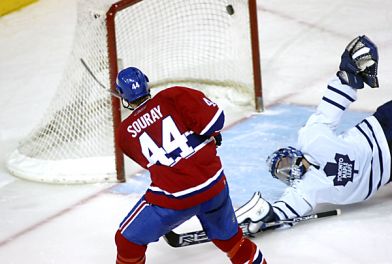 "I really never had any intention to trade Sheldon Souray" Gainey said. "For two reasons: One is we’d like to keep him and secondly, I really didn’t think it was fair for our fans to take a good player from our team in February, when our team was still a very capable team; a team that could make the playoffs and perhaps do well in the playoffs."

Markov recently told RDS that he would like to stay in Montreal and reach a deal before July 1 and Souray told Team 990 last month that he too is interested in remaining a Canadien, but is also excited to entertain offers if it gets to that point.

"It’s an exciting time," Souray said. "You put your team in to see what teams might be interested in your services, but that’s still a while away. But all things equal, Montreal is the team I’m with and I’m hoping that will work itself out."

Souray had a sensational season, scoring 26 goals and 64 points. Many league insiders believe that will enable him to command a yearly contract of at least $5.5 million.

While finding a way to keep Markov and Souray within their cap limits will be difficult enough, Gainey also will have to figure out what to do with the disgruntled and non-productive Sergei Samsonov and Alexei Kovalev. Both players underachieved this season and at times took their frustration out on head coach Guy Carbonneau and the defensive-minded system he used.

While the Canadiens have walked the line as far as what they say or how they react to Kovalev’s comments and actions, they already tried to trade and waive Samsonov and seem determined to do so again this summer.

"Our options are to attempt to trade him as we did at his request earlier in the year or we can also buy out his contract," Gainey said of Samsonov.

The Canadiens hold the same options for Kovalev, but as they did with Samsonov’s $3.5 annual salary, they most definitely find Kovalev’s $4.5 million per season hard to unload.

"While the buzz right after the season was what Gainey did wrong, and whether Saku Koivu wanted out, it has now shifted to how Gainey will deal with Kovalev and Samsonov and whether Carbonneau’s style did in fact hamper the way they played," Marinaro said. "This will go on all summer and every move the Canadiens make will be discussed over and over."

Gainey has made it clear that he will stick to his plan and build around the young core he has formed, but from the looks of it, he also will be busy cleaning up what he tried to sprinkle around that core for the past three years, as well as keep veterans like Souray and Markov. It has already and will continue to be a busy summer in the city that accepts nothing but excellence from its hockey team.