Share All sharing options for: Doan Fudge With Frog Media 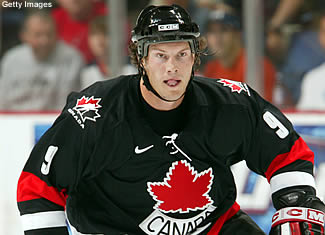 You might have read all you care to read about the nonsensical Shane Doan controversy, and how out of proportion the entire fiasco got blown into. In the hockey microscope that Canada sometimes sees itself through, the story easily parlays itself into tragic comedy and burlesque routines. The players (not hockey players, mind you!) who willingly took part in this sorry act, have been resoundingly shamed by its own populace.

The story became a drama because of timing, and for all the dreadfully wrong reasons.
It had everything to do with the game of politics and journalism, and little to do with the game of hockey. It showed that some of our country's best skaters are on Parliament Hill. Others are employed by large newspaper chains.

These stickhandlers of truth deke better than some of our game's best shooters, and they unfortunately brought a wagonload of media along for the ride.

To recap the festering wound, the story boiled down to an alleged racist remark made by Doan two seasons back when his Phoenix Coyotes played a rare contest in Montreal against the Canadiens. After a controversial call against the Coyotes, players milled about, complaining of the call. As a scrum ensued between Phoenix players and game officials, a racial slur was seemingly heard, and a post game report was filled.

Linesman Michel Cormier attested afterwards that Coyote's captain Doan uttered the term "f-ing frogs" when disputing the call. In was brought to public attention at the time when the official's report was filled with the NHL. Upon investigation, all claims were dropped.

The reasons for this become more unclear as the days pass.

After speaking with Cormier, Coderre decided on Doan as a target for his separatist angst and and political gain. He made public comments on the seemingly dead issue and provoked Doan to the extreme of filling a lawsuit. The inevitable countersuit followed and is still before the courts.

Fast forward to 2007, and the issue was on low simmer until Doan was named to Team Canada. It became a hot topic as Doan was named captain of the team.

The righteous francophone press groaned a simultaneous "How dare they!"

An opportunity such as this, in Quebec separatist political circles, can be seen like a breakaway in sudden death overtime.

Instantly, and without hesitation, Quebec played the racism card. The controversy came to a head with more thrust than ever as the french media of the province saw a light. One day after the press pounced on the controvery, members of Canadian Parliament were looking for an inquiry.

The fools were lining themselves up for ridicule without a clue.


Regardless of the Canadian political party in power, it is a foregone conclusion that they will occasionally bow to kiss some Quebecois butts. In this instance, all parties in opposition to the current government in power, lined up to play the fool. With Quebec always amounting to what is in essense the "swing vote" of political gain, politicians who knew better were lured into showing their stripes.

The ruling Conservative party were blindsided by the amount of media coverage, and gave in to opposition party demands that Hockey Canada, a Canadian government sponsored body, answer as to why Doan, anti- francophone as he was painted, would be named as the team's captain.

The Conservatives had few options to do little else, with votes in Quebec always at stake. The heads of Hockey Canada were brought before the House Of Commons.

What followed shifted perception one hundred and eighty degrees.

Before even suggesting that government mind it's own business, Hockey Canada head Bob Nicholson read a resume of Doan's captain's credentials. They were outstanding, and without blemish. Doan's leadership capabilities, character, and morals were read aloud for all to ponder.

Even IIHF President Rene Fassel weighed in with his wisdom that politicians have no business straying into sports issues.

The people of Canada quickly weighed in, suggesting that all politicians better have more pressing concerns.

The backhanded wallop was felt all the way through the province of Quebec, where columnists and editorialists danced a hypocritical tango seldom seen in La Belle Province.

After pushing the issue, their hypocritical response sifted into the majority, questioning agenda's that were uniquely their own to start with.

What's that old line about folding faster than Superman at the laundromat?

I for one, thought it all a joke initially. I didn't think it would even go that far.

I've always felt that as a bilingual citizen of the country I had a partial beat on how the linguistic sides saw each other. For that, I've always felt blessed. Having been born with what appears to some as a physical handicap, I am no stranger to what can be termed derogatory comments.

The alledged "frog" reference tossed by Doan has been directed at me and never made a dent. I have never been anything less than proud of my French heritage. Upon being called such, a laugh would be all I could muster.

What Doan may have been getting at with his alledged comment, had way more to do with a bias, than a prejudice.

There is a big difference, especially to those not living within the confines of Quebec repression and reaction.

In short, the separatist movement in Quebec thrives on the misunderstanding that its citizens are maligned cross country. It's a partial truth that they themselves have fed. It is also an old ploy to vote garnering that has worked for decades. It uses racism as a catapult for their extreme cause, futile as it has become.

The Doan case was their latest wick to a long fuse in search of a spark. Simply put the hypocrites exposed themselves, all by themselves.

Many unsought out defendants rose to Doan's defense. They trumpeted his Christian values and leadership qualities enough to quench any question of doubt of his role as a leader of men in red and white. And get this, no of them have ever heard him utter a swear word.

The truth be, um, er, damned, shall I suggest.

In the end, it came down to Doan attempting to calm a teammate with the words "Four french officials in Montreal, you figure it out!"

Wow, ain't that a doozy, a player hinting a bias!

I give kudos to Doan for admitting he even said such a thing. That alone could light the fire all over again.

I get it, that the NHL investigation concluded why an official would be so rankled, upon hearing such a daggered jab. It makes me understand why that official would be so ticked as to file a complaint. It questioned Cormier's integrity, and brought up questions about the leagues policies as well.

Placing four french Canadian officials at the Bell Centre, almost deserves its own inquiry. In the past when such situation arose, the french officials seemed to go out of their way to disprove any such bias, often to the detriment of the Canadiens.

The players who are standing up for Doan say, that in frustration, his worst curse comes out as "fudge".

This entire footnote was appropriatly swept under a compliant rug by the NHL investigation ages ago, only to be revived again by the Canadian House Of Commons.

My biggest pickle in all of this, is a personal one. It involves journalists that I'd long well respected, who cover the Montreal hockey scene with great knowledge and insight. My advice to them would echo Rene Fassel's words, avoiding the political agenda's entangling sports.

My main beef involves Hall Of Fame scribe Bertrand Raymond of Le Journal De Montreal, who coiled on his own pursuit of the controversy once facts arose. Raymond needed not pursue the issue, his hockey knowledge being well enshrined. One must believe he climbed aboard by reason of personal beliefs. Other Quebec journalists took his lead, as usual. 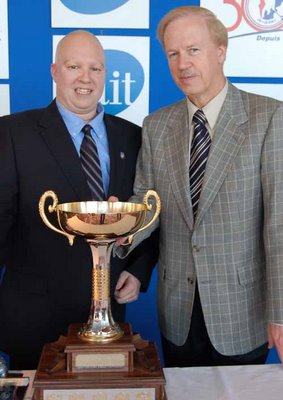 Raymond on the right, presenting his journalistic award.

It is regrettable. When even the Quebec public showed its disapproval for such nonsense, Raymond stood firm in his racist fallout shelter and maintained his stand.

Sadly, he refuses to aknowledge the difference between a prejudice and a perceived bias.

As the dust of the Doan controversy began to settle, a perfectly choreographed media backstep ensued, with Raymond leading the way. While showing exasperation with how Doan was now being branded a virtual choir boy, he tosses off that former Hab Claude Lemieux had a lexicon of anti-everything slurs that would put anyone to shame.

His thinly veiled absolving of Doan hardly flies - it was almost tongue in cheek. Where Raymond backsteps and slips in his overall view of the entire overreaction, is on an old banana peel named Patrice Brisbois.

A few years back, Brisebois became fed up with being likened to the hopping green reptile species and blew the whistle on an unsuspecting Vaclav Prospal, then of the Senators for uttering the term. Prospal was questioned by the NHL without being fined. His explanation was fairly placid in his defense. Prospal simply stated that he was repeating a saying that was so common place that he'd heard it hundreds of times since he arrived in the NHL without ever even understanding its meaning.

At the time, I laughed in accordance with that view. Raymond brought it up nonetheless, neatly forgetting how the scenario played out.

The unanimous reaction to Brisebois' blathering came from a bevy of french Canadian NHL oldtimers, who essentially suggested that Patrice needed a thicker skin.

Before that story gained momentum, the oldtimers swipe snuffed it out.

Raymond and the french press corps obviously missed that lesson and continue to insist that being termed a frog is derogatory and racist. It's not in the term they insist, it's in the intent.
Well boo-hoo-hoo!

To me, it simply remains a schoolyard alliteration for mocking eight year olds. The children disguised as journalists and politicians have yet to clue in that recess is over.

I don't think I can read Raymond the same way anymore.

May he, and all those who wrote pieces on Doan only to perform journalistic flipflops, go fudge themselves!

In their language of choice!

If you'd like to read Raymond's rants, and you're a f-ing frog like me, here are four articles that document his diatribe. Hop on over and check them out!