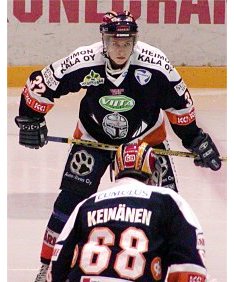 According to this Finnish sports site, the Canadiens have signed 6' 2'', 200lb forward Janne Lahti. Trouble is all the details are in the language of double ii's, aa's and nn's. As of this moment there has yet to be confirmation of the signing at the Canadiens official site, so knowledge of exactly who Lahti is remains limited.

If your Finnish is good you can try this one interpretation from the site:

I did manage to find this piece from On Frozen Blog where Lahti is discussed as a hoped for Washington Capitals signing.

It reads: Janne Lahti's name arose this afternoon during a WaPost chat with Tarik.

Fredericksburgh, Va: "Tarik, Janne Lahti scored another goal for HPK in the Finnish playoffs to send the game to OT. He has seven goals in seven games now. I hope the rumors of him signing here are true."

Tarik El-Bashir: "I heard those rumors, too. I’ve been trying to get a hold of GMGM to confirm. Not that he’ll say anything, though. But that’s never stopped me from trying."

We hadn’t heard his name before today, but we’ve conducted a bit of crack research. He goes about 6 ‘2, 200, and he skates for HPK Hameenlinna of the Finnish Elite League. He’ll be 25 this July. In 56 games with HPK this season he potted 20 goals and 14 assists — those goals in particular are eye-catching in any European Elite league. They’re solidly in the postseason in Finland now, and through seven games Lahti has 7 goals.

Apparently there had been many rumours on Finnish hockey message boards that he was about to sign with the Capitals.

Looks like they've been scooped by Gainey and company who had been doing some scouting at the World Tournament earlier this month.