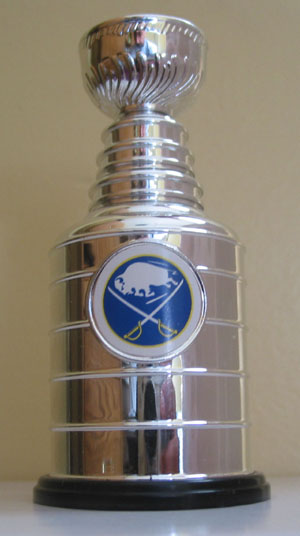 For whatever it's worth, seeing as the Canadiens aren't participating, here are my predictions for how I see the first round playing out. No big discourses or analysis here, just a note or two of explanation of my choices.

In essense, when the Canadiens are eliminated, I tend to cheer for what I find would make the most compelling Stanley Cup final. This year, I can't imagine much better than Detroit-Buffalo, although I will be avidly watching the two Canadiens teams out west, hoping for the best. Don't even get me started on the Senators!

Sabres in 5: The best coach in hockey behind the Buffalo bench and way too much depth for an Islander team who backed into the playoffs to handle, especially without a top goalie.
New Jersey-Tampa Bay

Jersey in 6: While the bolts have given the Devils some fits this season, I cannot imagine Brodeur being outplayed over seven games by an upstart at the opposite end.

Rangers in 7: A very tough call, but veteran leadership should give New York the slight edge. Atlanta could turn out to be this seasons "just happy to be here" team.

Pittsburgh in 7: Another tight one. While Ottawa has improved where it has needed to most, arrogance and stupidity will again do them in again. Already, coach Murray is displaying defensiveness and a losers nonsense in certain comments, especially suggesting the Penguins are actually the favorites. The young Pens have already overachieved and have nothing to lose. The series will hardly be tilted by off-ice comments.

Red Wings in 7: Both teams have much to be forgiven for and will have last seasons early exits as motivation to win. Should be one dandy of a showdown and I won't be upset no matter who takes it - I love both these teams. I give a slight nod to the Wings due to the experience and fear factors.

Wild in 6: The Ducks best hockey seems behind them while Minny has put it all together of late. Wild coach Lemaire is just too smart to be outdone by Carlyle, he'll key on Pronger and Neidermayer and force his players to tire them out. Brian Burke will get louder as the series progresses, if the Canards don't measure up.

Canucks in 5: Vancouver has been in playoff mode since late November and the Dallas lineup is loaded with wilting daisies the likes of Ribeiro and Turco. While the season series has been tight (the teams split four 2-1 games), this presssure cooker will bring out the worst of the Stars. With a hot Luongo, the sky is the limit.

Sharks in 6: Could be the roughest of all first round matchups. The Sharks made some of the smoothest trade deadline additions and have excellent depth while the Preds seemed to unsettle a stable group with the adding of Forsberg, who did not necessarily make them any better. The key will be Thornton, who has much to be pardoned for in past playoff disappearances. he seems primed to step and get mean, finally.

In the much larger picture, I see this as being Buffalo's year to win it all. They ought to be the most confident team entering the playoffs and are starting off healthier than last season, when I thought they were the best team but were undone by miserable bad luck.

My longshot team is the Sharks. Should their best players perform with toughness and grit, it should bring out the best in a solid and sturdy lineup. A wily coach in Wilson may become their biggest attribute.