Share All sharing options for: Leafs Eliminated By Overtime Win 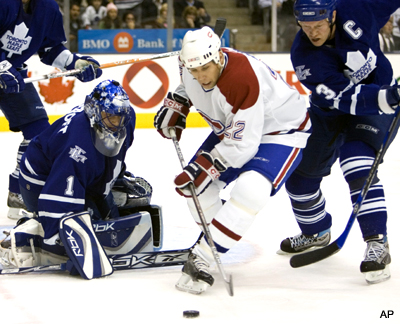 (Note: Saturday's Habs-Leafs game could come down to this, thanks to that wonderful system of awarding teams one point for losing. The NHL might call it excitement - I call it terrible PR for hockey. This of course, is a ficticious account, tilted in the Habs favor. While some may enjoy it, it is not really meant to be enjoyed so much as it is to be feared. It could happen to Montreal, or any other team.)

The Toronto Maple Leafs did everything they could in this final week of regular season action to advance to the post season, only the NHL points system and the Montreal Canadiens didn't comply.

It is an irritating and annoying way to seal the year off.

While many will point to the Leafs stumbling in New York against the Rangers last Sunday, others will blame their exclusion on the ridiculous notion of awarding losers a point in this new NHL.

It would be hard to fault the Leafs otherwise. They did what they had to, to set up a final winner take all scenario with the Canadiens. They beat Philadelphia 4-2 on Tuesday, pounded the Islanders 7-1 on Thursday, and had all of Leaf Nation primed for this one final showdown.

Only it wasn't the winner who took it all - it was the tie-er! Nothing of this script from hell seemed to make any sense.

The simplicity of it, is that the Canadiens as well, did what they needed to do. They shut out the Boston Bruins before heading to New York to double the Jagr-less, Shanny-less Rangers 6-3.
But when the table was set and the Leafs needed a win, all the Canadiens needed was a tie. With Montreal having 43 wins, and the Leafs only able to reach 41, the deck seemed stacked.

If you can recall the last time a coach pulled a goalie with the score tied, needing a goal for a win, you probably have a friend who played for the 1904 Ottawa Silver Seven in a two game total goal series.

It was only half funny to see the looks on some fans faces, from perplexed to dejected, as Leafs coach Paul Maurice yanked Andrew Raycroft with 1:53 left in the third as the Buds went for the goal, essentially playing sudden death hockey in regulation time.

After the Canadiens jumped out to a quick two goal lead in the first, the Maple Leafs were valiant in their effort to knot the game up by the end of the frame.

Tomas Plekanec opened the scoring for Montreal at 2:18 of the first, while Bryan McCabe was doing some dubious sin bin duty after hauling down Habs captain Koivu with a slight brush by. The booing wasn't over when Leafs goalie Andrew Raycroft, playing without his stick, dove and just missed the Plekanec one-timer.

Sheldon Souray, made history next, with a blaster off the right skate of Pavel Kubina, marking his NHL record 19th power play goal of the season. Tomas Kaberle was in the box for what coaches term a "good penalty" after hooking the Habs Maxim Lapierre, who'd found a hole in the Leafs D to break in alone.

Starting the second, the Leafs came out a different team. Maurice's tinkering paid off as Chad Kilger looked to carve himself a niche in Leaf infamy with two goals in 17 seconds to send the ACC crowd into delirium.

Pairing the sturdy Kilger with Mats Sundin was looking like a masterstroke, until penalties again crunched the Leafs momentum.

A parade of penalized blue and white's snuffed out all the drive from a killer middle frame as the Leafs thwarted two Montreal five on three's. The defibrulators almost came out for a second consecutive Saturday when the Canadiens Michael Ryder, followed by Souray, both rang metal on the second 5 on 3.

When Bates Battaglia netted an early third period goal, the crowd came back with a vengance. The rugged winger's tip in left Habs goalie Jaroslav Halak with no chance.

The officials played even-up on the calls, when Sundin was sent off for elbowing Alex Kovalev immediatly after to go ahead goal.

The Leafs cautiously slipped into a defensive mode with the Canadiens offense generating few opportunities in the first ten minutes of the third.

Disaster struck, to be honestly dramatic, when Chris Higgins lifted Kyle Wellwood's stick, stealing the puck with 100 feet of open ice between he and Raycroft. The high mesh-bound wrister, will be on constant replay in Leafs fans midsummer night hockey nightmares.

With little left to lose, the Leafs poured in on for the final five minutes, coming closest when Yannick Perreault fired high over an open side.

At the two minute mark, Maurice frantically waived Raycroft to the bench and the Leafs buzzed the Habs net. Perhaps overanxiously, the Canadiens iced the puck three times in the final minute, giving the Leafs ample line changes while the Habs duo of Markov and Komisarek never left the ice. Why maurice chose to call a time-out at the :38 second mark is anyone's guess. A rest wasn't exactly the prescribed remedy for the moment.

As the seconds ticked down, the large scattering fo Canadiens fans became evident, as their initial cheers rose loudly only to be drowned out by even louder booing.

It was as if someone had posted Gary Bettman's picture on the overhead screen!

The 4 on 4 five minute period was quite simply a bad joke.

With the stands virtually emptied, the puck was dropped to begin play, when there was really no sense in playing at all. It was obvious the Canadiens saw no reason to play, barely even going through the motions. Sixteen seconds in, Wellwood skated around Janne Niinimaa and slid an effortless shot beyond a stone still Halak to seal the books on the Leafs season.

There seemed to be confusion even amongst both coaches and it's been said that Maurice even left the shootout card blank. After discussions with officials, each coach put out their four players, the puck was dropped and Wellwood went for his little spin.

The whole scene was testament to embarassment for the league. It should never be repeated.