In my seemingly never ending quest for knowledge of the Montreal Canadiens goaltenders history, I recently unearthed the story of Gene Decosse at www.LostHockey.com.

The story of Decosse is an interesting one. Let me suggest that the man had a brush with infamy, to say the least.

I hope you enjoy the read.

Eugène Décosse, born on December 9th, 1900 in Hull, Québec, had the honour of backing up the legendary Montreal Canadiens goaltender Georges Vézina for a lone game in the 1924 season opener against the Toronto St-Pats.

As a boy, Décosse was raised in the heart of the blue-collared area of Hull a few streets away from the E.B. Eddy paper mills and just around the corner from the Bank Hotel, which would later be owned by D'arcy Coulton. Much of this neighborhood was demolished in the 1970's to make way for government office complexes, but his childhood house remains intact, wedged between two parking lots at 57 Wellington street.

Gene made his way up the Ottawa and Hull hockey ranks, playing for such teams as the Hull Canadiens, the Ottawa Royal Canadiens and the Ottawa New Edinburghs. Gene had his first great season in 1918-19, earning a Goals Against Average (GAA) of 0.50, managing 6 wins, 5 of which were shutouts, in his 8 appearances for the Ottawa Royal Canadiens. The next four years saw him put in good performances with three different teams in the OCHL, earning two First All-Star and one Second All-Star title. 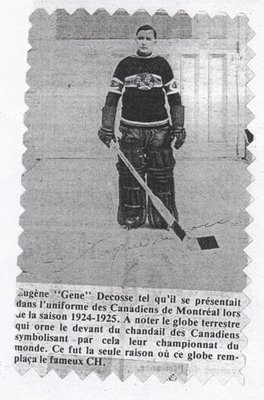 In November of 1924, Gene got his chance with the NHL, joining the reigning world champion Montreal Canadiens at training camp. It is unclear exactly why he and relatively average fellow Ottawa players René Joliat and René Lafleur all got a chance with the Habs at the same time.

Signed as a free agent, he headed to Toronto with the team to open the season against the St-Pats, but Vézina was in fine form, and back stopped the Habs to an easy 7 to 1 victory, leaving Gene to warm the bench.

The very next day, Décosse was headed for home. The french language Ottawa newspaper Le Droit painted Décosse's return to Ottawa as a good thing, claiming the conditions offered by the Canadiens contract were not worth throwing ones future away for a few dollars. The paper did not elaborate on what those expectations were, but they were presumably equally unacceptable to René Joliat and René Lafleur, who also returned to the Ottawa area following their lone games in the NHL. The pressure of family no doubt also factored into Gene's decision, as he was the primary bread winner in the family following the loss of his father to Influenza.

Now back in Ottawa, Gene somewhat reluctantly returned to the amateur hockey ranks and would play two more seasons with the Ottawa New Edinburghs before hanging up his pads for good at the age of 25. With hockey behind him for the time being, Gene focused on his career and founded the "L'Opinion de Hull" newspaper and assumed the role of editor-in-chief. Described as a workaholic, Gene also took on various other positions which included the role of Provincial Finance Receiver for the city of Hull, Special Investigator for the provincial Receiver General and Director of Provincial Security for the city in addition to serving as a city alderman for two years. During this time, he would return to the newspaper offices at the end of the day to work late into the night.

Not one to sit still, Gene also continued to make time for his love of sports, which now included baseball. He took on the roles of president for the Interporvincial League and the city of Hull League. In 1940, he built Décosse Stadium which was the centre of baseball activity for a decade before outgrowing it's needs, and falling victim to expropriation to make way for office buildings. He also served as director of the National Baseball Team in Ottawa and as manager of the Ottawa Auditorium.

In 1936 Gene returned to hockey as a coach, putting together the Hull Volants team from what was described as "leftover" players. Against all odds, the team had a great season and went on to win the OCHL championship, earning them a birth in the Allan Cup's eastern finals, were they were later defeated.

During the Christmas holiday season of 1954-55, the long hours of hard work and volunteering caught up to Gene, and he was admitted to hospital following a heart attack. On January 2nd, 1955, he succumbed to heart failure, leaving behind his wife and son. As the city he had given his life to continued to grow, Gene's contributions were honoured with the naming of Décosse street.