Habs Koivu, A Captain For The Ages

Share All sharing options for: Habs Koivu, A Captain For The Ages 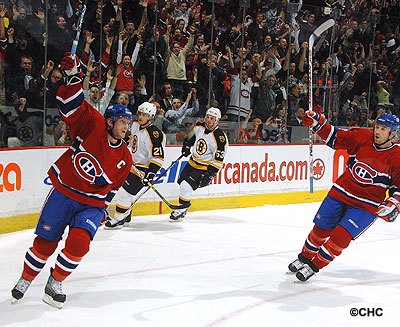 Montreal Canadiens captain Saku Koivu, hero of Tuesday night's win over the Bruins, is on the brink of several interesting career milestones.

The Habs 32 year old Finnish captain, the 28th man to be adorned with the "C" in team history, equalled and surpassed personal season high's for goals in the game, with his two goal effort. His totals now read 22 goals and 49 assists for the year with two games remaining.

The 71 points also matches his career high totals set in 2002-03, which came on the heels of his battle with non Hodgkin's lymphona the previous season. The stomach cancer almost ended with career, and more importantly, his very life.

The Canadiens embattled leader seemed to return a better man, a stronger player, and a more respected leader. Often injured prior to 2002, he has missed only 25 games in the four seasons since.

After suffering a second career ending threat in 2006, stemming from a high stick gash to his left eye courtesy of Carolina's Justin Williams in last season's playoffs, Koivu's playing days seemed in doubt. His vision has not yet returned to normal. He is due for off season cataract surgery in the summer.

Surprisingly, the eye has not seemed to bother him much on the ice, and he has complained little of the annoyances of blurry patches in his sight. As he tells it, it has affected his driving more than his playing.

He has simply done what he does best and forged on to challenge new career highs in assists and points.

Throughout his 12 year tenure in Montreal, more has often been expected of Koivu, offensively speaking. While the size of his heart could never be denied, it has been bandied that his numbers do not match those of a top line center. Many Canadiens fans, not entirely wrong on the matter, have surmised that the gutsy Finn's production is more befitting a second line pivot than a first.
The fact that no one resembling Mario Lemieux or Vincent Lecavalier showed up to play for Montreal in the last decade, is hardly Koivu's fault or cross to bare.

There is no doubt that in certain views, Koivu has been maligned unjustifiably for what he hasn't been or done, rather than being championed for all he has.

My question in response would be, exactly what more of himself does he have to give, and whose right is it to ask it of him?

The almost $5 million dollar annual salary awarded to this fearless man in compensation for his sacrifices on and off the ice, bring those questions to a head following ordinary games every pro athlete is prone to.

Koivu had just displayed some rather ordinary hockey, as recently as the Canadiens 5-2 loss to Ottawa last Friday. He recieved diminished icetime from a concerned Guy Carbonneau beginning in the third period of the Buffalo contest on Saturday.

The proud Koivu surely felt personally scorched with the slight demotion and responded in true leader fashion by netting the game winner in the 3-2 win over the Sabres.

In popping home both goals in the shutout of Boston on Tuesday, he has now accounted for the teams last three goals, in this crucial moment when his team and city needs him most.

His first goal against the Bruins, pretty much floored me. A singular, one against the odds of four effort, Koivu split two penalty killing Bruin forwards, in a scrum with two defenseman, to skate in and deke the Boston netminder almost with ease. The goal typified the Koivu stubborness. I was so impressed I filmed it and loaded it onto You Tube myself.

Now should the Canadiens stumble and just fail to miss the playoffs, the slings and arrows of criticism will surely fly his way, unfairly, even in the midst of his achievements.

In the sometimes unforgiving hockey city that is Montreal, Koivu's leadership will again cause questioning, as it did after Friday's loss. Presumably, someone with a misguided sense of crystal vision in the Montreal media, believes that Koivu will want out of Montreal following the trading of his best friend Craig Rivet to San Jose, and Saturday's little sit down episode.

Perhaps people thinking such things need to read over the man's resume once more to peer at what adversity brings out of him. It ought to put questions to rest, regardless of the Habs post season fate.

Koivu will remain a Canadien through the termination of this contract, which has two years left to run.

By that time, he will have served under the "C" for a full ten seasons, a feat matched only by Habs icon Jean Beliveau.

In the annals of great Canadiens captains, the record shows that after Beliveau's decade long tenure as Habs captain for the 1960's, Koivu is not far behind in games served.

Present GM Bob Gainey, who knows a thing or two about leadership, served 8 seasons from 1981 to 1989. Emile "Butch" Bouchard, matching Gainey and Koivu's eight seasons of uninterupted duty, was captain from 1948 to 1956. Bouchard preceded Maurice "The Rocket" Richard, the spirit of the Canadiens torch tradition, who surprisingly was captain for only his final four years.

In the earlier history of the organization, Sylvio Mantha spread 3 and 6 year tenures over ten seasons, and Cornwall born Edouard "Newsy" Lalonde, served three times for Le Club de Hockey Canadien in 1910, 1912, and from 1916 to 1922.

Koivu sits among some very lofty company in the franchises storied history and surely knows it. He will likely be wearing the "C" still as the Habs celebrate a glorious 100 year anniversary in 2009.

He would be doing so, as the teams longest serving captain. It is an honour that would surely befit him, considering the roads and detours his career has taken. Barring a Stanley Cup to crown his achievements, that day may well frame what is his legacy of committment and dedication to the Canadiens.

It would be a shame if he were not there, then, for whatever reasons, to bask in that moment so characteristic of who is, and what he's meant to the team, the fans, the city, and the game.