Habs have little margin for error

Share All sharing options for: Habs have little margin for error 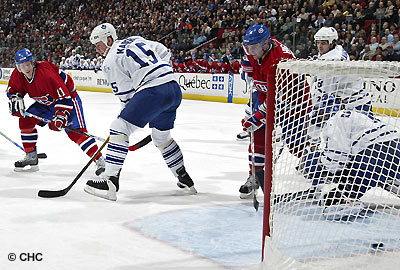 With a mere seven days remaining in the Montreal Canadiens regular season, it appears that only 2 teams other than themselves, can help determine their fate.

The key is what they, themselves, accomplish as far as wins.

Either way it is looked at, the results of games involving the Habs, and those between the Rangers a point above them, and the Maple Leafs, a point below them, are extremely critical.

Games involving the Tampa Bay Lightning, Carolina Hurricanes, and New York Islanders have slipped to the periphery of the Habs fate.

The simplest truth remains that they require 3 wins and 6 points to make the post season. Any deviance from that fact, should they falter in that goal, would necessitate help from the final two teams they need to beat.

Help in this case would be described as timely losses and timely wins by those Rangers and Leafs. Counting on either is risky.

On either count, help starts on April Fools Day - today, of all ironics!

The Habs need the team they are chasing, the Rangers, to beat the team chasing them, the Maple Leafs, in order to avoid a final, winner takes all game, with the Leafs next Saturday.

While the Canadiens are chasing the Rangers, the logjam that would be created by a Toronto win on Sunday, hinders their chances, and sets up a do or die next weekend in Toronto. The Leafs would also jump past Montreal in the standings, by 1 point, with a win over the Rangers, making next Thursdays Habs / Rangers game even more crucial to NYR.

From the Rangers perspective, winning the next 2 games qualifies them for the post season. If you check the current standings below, you can see that the 4 additional points would put the Rangers out of reach of the Hurricanes, Islanders and Leafs, with 93. Toronto could still achieve 93 points, but with less wins cannot surpass the Rangers in the standings.

That is why a New York win on Sunday, gives Montreal two advantages.

One, the Canadiens / Rangers tilt next Thursday has much less consequence for NYR, should they defeat the Islanders as would be expected on Tuesday. That wouldn't be bad news for the Habs.

The second benefit is that Toronto would then max out at a total of 93 possible points with a loss to NYR tomorrow. Should they need overtime to beat Montreal on Saturday, the Habs would be in the playoffs, as the season series gives Montreal the edge.

The tricky scenarios do not end there. Two Maple Leaf's losses combined with a win and extra time loss by Montreal, eliminates Toronto, due to Montreal's win total and season series stats versus each other, regardless of a Toronto win over the Habs in the final game.

For the longshot Islanders and Hurricanes, the situation is awful grim, as both teams remain three points back from ninth place Toronto. If they believe in miracles, prayer beads, voodoo, and Sundin, Jagr, and Koivu kupie dolls, it begins with both of them winning all 4 of their remaining games.

The Hurricanes do not play Montreal, Toronto, or the Rangers, and can therefore not affect their fate. Two Montreal wins, barring a Tampa and Rangers collapse (1 win, 2 wins, respectively) eliminates them.

The Islanders have a slight edge on the 'Canes, if one could term it that, as they play the Rangers and Leafs, Tuesday and Thursday respectively, in games that involve them chasing their fate.

Should the Habs get cocky and fumble against Boston on Tuesday, I just might take every iota of hockey knowledge I have, on a long holiday till next October!