Habs Can't Get There From Here

Share All sharing options for: Habs Can't Get There From Here 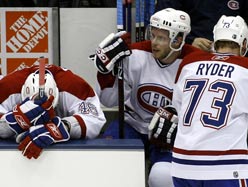 Continuing in the rock song analogy mode, my favorite R.E.M. track has always been a funky mother of a tune called "Can't Get There From Here". It's from a disc called "Fables Of The Reconstruction / Reconstruction Of The Fables", oddly enough, which falls perfectly in line with my thoughts of what the Canadiens should be doing, seeing as the off-season has immediatly kicked in resulting from the Saturday night shock in Toronto.


In the track, as lead singer Michael Stipe shouts out the title in the chorus, while background singers contrarily chime "I've been there, I know the way."

It may sound out like a discourse between Habs GM Bob Gainey and the Montreal media this summer!

Gainey knows the way, he's been there before.

It must surely be obvious to the GM that this working version of the Canadiens has run it's course. With this lineup, there would be no playoffs again next season.

Now as the song's Philomath, Oregon destination might describe a futile road trip, the Habs road back to Stanley Cup glory would hit similar roadbumps or get stranded in a perpetual pothole, should the team remain stagnant.

There are no shortcuts here, but this vehicle needs more air and better winter tires.

Trust me, my fellow Habs fans, on further inspection, missing the 2007 post season is not the devastation it appears to be.

Had the team gone on, to what was likely a first round eliminition, what exactly would that have meant? Could anyone have suggested mission accomplished, then? I doubt it!

Making the playoffs, would have caused the team to be over-evaluated. Now, it is certain that many of the teams elements will be given a good going over. Maybe even a ruthless one.

What I see happening is one third of the lineup being trashed, if only to create spending options and answer team chemistry questions.

Keeping in mind that the Habs have so far committed almost 22.3 to ten players on next years roster, they should have near 27.7 to spend as they choose.

As it looks more and more that the dollar totals of Murray and Samsonov could be minor-leagued, the Canadiens would then have 18 million as a starting point for next season. Not a bad proposition at all!

There are 6 RFA's of lesser concern, as the team has the right to match any outside offers. Four of those six could receive deals upping their salaraies by a million per season. Aside from the ghostly Alexander Perezhogin and seldom used Josh Gorges, raises should be tendered to Chris Higgins, Mike Komisarek, Michael Ryder and Tomas Plekanec. Considering the team missed the playoffs, GM Gainey may be able to get away with less dollars in a case or two.

If those four named add 5 million to payroll, it would be sensible. That would bring 14 players under contract at 23 million. The remaining 25 big ones could be used to resign Andrei Markov and Sheldon Souray, who I feel would both remain Canadiens if offered market value.

David Aebischer, Mike Johnson, Radek Bonk and Janne Niinimaa, UFA's all, will hit the highway, no tears cried while subtracting 8.7 million dollars from last (and next) season's salary cap - no questions asked.

Bonk is the only one of the 4 who could return at a discounted rate. He'd be hard pressed to ask for a raise.

If this summers signings mirror the tidy effectiveness executed last June, when Gainey had everything wrapped up earlier than most, things could become interesting for the team at noon on July 1st.

Perhaps the most intriguing question that will be asked, will have to do with Alex Kovalev.
There is little doubt in my mind that the Canadiens will seek to rid themselves of the overpaid nightmare. Any takers?