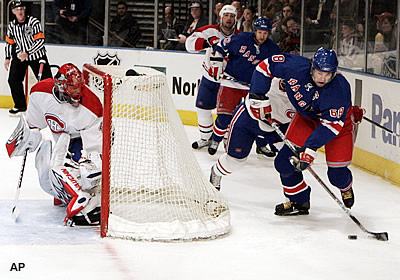 They can blame it on the dancing bears, the looming stench of elephant dung in the air, or the resulting mushy ice. Anyway you slice it, the Habs simply didn't measure up against the Rangers tonight at MSG.

The Canadiens missed a golden chance to clinch a playoff spot with a tie, as the Toronto Maple Leafs (still borrowing an old Canadiens logo from 1910 - see below) were whisked and flabbergasted 5-2 by the New York Islanders and a third string goalie named Wade Doodleyouawitch, or something like that.

Both New York teams are seemingly taking pleasure in making it difficult for either of the two Canadiens teams to pierce the eighth spot. The Islanders are surprisingly still alive in the hunt. They would need Toronto to beat the Canadiens in regular combined with a pair of wins of their own over Philadelphia and New Jersey this weekend to make the 8th seed. Stranger things have happened!

As far as the Habs tonight, there really isn't much to add to how out of sync they were.

March annually brings the circus to MSG (which is also an acronym for monosodium glutimate, a leading cause of migraine headaches similar to the one I felt coming on watching this game), causing the slushy ice the Rangers deal with every year at the onset of the playoffs.

The Rangers can keep that funky elephant smell and their 54 year Cup droughts that come attached to such an idiocrity.

The game was no treat to watch and only three things kept me interested as the score ran up to 3-0 Rangers.

The sideshow antics of Sean Avery are always entertaining. Whether one hates his face or hates his guts, one must admit that he is tactically irritating to any opponant, usually to the Rangers benefit. To think that the Rangers plucked this guy from L.A. for a song (the equivalent of a bad ABBA song - if you ask me!), in what is IMO the best trade deadline pickup this season.

Twenty-eight other GM's might be wondering why they didn't seek to add the effective imbecile to their roster.

Guy Carbonneau wisely used the third period to test drive Cristobal Huet, who seemed his normal self while not being severely tested. In the post game banter he suggested that we might just see him again in Toronto on Saturday. Hearing that is as good as taking it to the bank that Huet will start. I'd be surprised now if he went back to Halak (hey, that rhymes!).

I've always believed that you dance with the one who brought you, and it's a shame that Jaroslav Halak will not get the chance to finish what he started. It's the coaches choice, but I feel for Halak, as the Habs would be polishing golf clubs had they relied on Aebischer one more game when it counted.

Halak, incidently, wasNHL's all-rookie team as well. He trails only Dallas' Mike Smith in wins (12-10) but has played way less games at a more crucial time. He just might get the honoured by the AHL as the chosen goaltender on the all-rookie team. The cool thing about that is he could also be considered for the nod in the bigs also. The downside of this is he would be duplicating a feat by the infamous Jim Carrey (remember the net detective?) who did the trick during the 1994-95 season, and we all know what happened to his career afterwards. Let's hope the same fate does not fall on Halak.

In the did you know that department: Here's a great tricky trivia question to baffled your know-it-all hockey friends.

Habs World has a very informative piece on Halak and what the other Habs prospect have been up to of late. Call it a must read!

So it's on to a much dreaded final showdown with the Habs and Maple Leafs on Saturday night.

The game will likely be somewhat historic for the team that wins, and groaning agony for the losing squad and their fans.