Share All sharing options for: Gainey On Feaster's Speed Dial 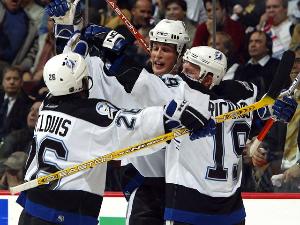 With the first round exit of the Tampa Bay Lightening, Bob Gainey may have invariably found himself the one compratriate capable of making his cell phone bill skyrocket.

The chances of the Canadiens aquiring an impact player via the free agent route are slim.

Gainey might be best to turn his option towards the trade route if he wishes to improve the team more quickly and in a more significant manner.

For the second consecutive season, Feaster has watched the Lightening make the playoffs with much difficulty, only to succumb to a rapid exit.

The Lightening`s quagmire isn't complicated. Obviously the salaries of Vincent Lecavalier (7.167M) Brad Richards (7.8 M), and martin St. Louis (6M) are hampering the Lightening's ability to improve and remain competitive, because it's tied Feaster down to filling out the lineup with marginal talents. The series against the Devils gave ample proof the Lightening are a stagnant bunch. 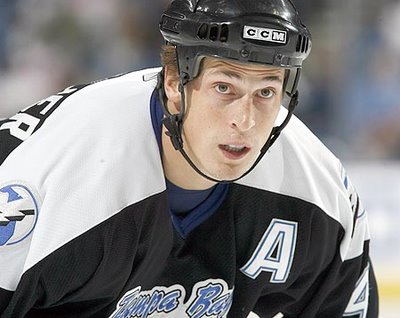 make matters worse for Tampa, the horizon doesn't look to get any brighter on the short to medium term outlook, for many reasons.

To begin with, Lecavalier, Richards, and St.Louis can hardly do better than they did this season, while being given maximum icetime.

Secondly, the farm team in Springsfield is empty of prospects. Its better players are all above 27 years of age and are tagged as career minor leaguers.

"We nothing on the farm" confided a Lightening player recently.

Finally, the team's owner William Davidson let it be known that the teams salary cap will in the 40 - 42 million range for next season.

This self imposed cap will further reduce Feaster's manoeverabilty and he is cornered by the teams salaries handed to the players. Eight players totalling a $33 million payroll include the three already mentioned and five more signed for next season. Those players are Vaclav Prospal, Filip Kuba, Dan Boyle, Marc Denis, and Karri Ramo.

If one does the math, Feaster needs to fill out the remainder of the lineup card, 15 players perhaps, with a mere $15 million.

It's almost written in the sky that Feaster will need to drop one of his three bigger signings in order for the team to improve at any stretch.

It is pretty clear to see that Gainey would be on Feaster's speed dial at this point. The Canadiens are in need of the type of player the Lightening are desperate to move. The Habs also possess a sick amount of prospects with great upsides, at a cheap price!

It's a match made in heaven, just a few phone calls away!

More on the subject.