Share All sharing options for: Habs Elimination A Stairway Step To Better Days 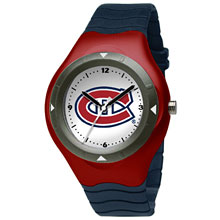 Funny thing... it's not the end of the world as I thought it would be.

But, before getting to the silver linings that are sure to sew better days, an analysis of tonight's loss by the Canadiens is in order.

Leading up to the game, the hype was tantamount to the game of the century. I felt it, knots in my stomach and all. It has greatly dissapated in the last hours.

I'm left to wonder, now, what all the fuss was about. On the ice tonight, we saw two honestly very mediocre teams battling for a last grasp of playoff bound pride. What we saw from both sides in the game, spoke loudly as to why both these teams were left to battle down to the 82nd game, still on the outside looking in.

Instead of great hockey, we got excitement at it's best, from hockey at it's worst. And the officiating came along for the ride.

Hockey is said to be a game of errors, and in that sense, we witnessed more about how to lose a game than win it - from both sides of the ice.

You would think that in a 6-5 game, with this much at stake, there would be highlight reels plays aplenty. Instead we got broken plays, flukey goals, and a spectacle that wasn't really worthy of all that pricy talent on the ice.

I'd imagine that perhaps the perspective from the Maple Leafs point of view is vastly different, but it really shouldn't be.

In the end, Toronto is one measly overtime loss-earned point better than the Canadiens after 82 games. The Maple Leafs are then, one small point superior to Montreal, while having won two fewer games. Leafs fans can mangle that consolation whichever way makes them feel best.
My angle,comes with no smoke and mirrors.

Neither squad was very good this season, when it mattered most, including tonight's game. These two teams, shrouded in proud Canadiana, have been God-awful lousy in stretches, but for different reasons altogether.

I initially felt a sting, thinking the rival Leafs had eliminated the Canadiens from playoff contention, but actually all Toronto did was hammer a final nail.

The coffin was prepared and delivered by a devastating flu virus that made successive appearances in the months of December and January. There was much more to it, but what the vomitting induced, hit the floor tonight.

The Canadiens valiantly attempted to recover, discovering a great goalie prospect in the process, but ultimately succumbed to doubt, chemistry, and fear along the way.

I say valiently, because against all odds, they missed out by one final goal scored.

So, onto the silver linings as I digress.

Depending on what occurs with the New York Islanders tomorrow, the Maple Leafs will know their playoff fate by suppertime.

Oddly, from where I'm viewing things in these early morning hours, I'm almost happy that the Habs have a head start in assessing their year and getting ready for the next. It's all about illusions, to be honest.

I'm sure no Habs fans in their right minds truly beleived this was the Canadiens year to win it all. I honestly doubt many Leafs fans see it that way either. I wouldn't have expected either team to go farther than one more week into the playoffs.

is the illusion that I speak of.

Toronto may well deem this season a success now, as they really weren't expected to go this far. What they do from this point on, and how they react to whatever it is they feel they have achieved, is affected by their illusion of tonight's win.

The Canadiens, on the other hand, will not be under any such illusions. However much success they have had it this season, and there are a bundle of positives, the critical eye will make decisions very cut and dried.

And that's a good thing.

I will make no apologies for using a classic rock song as an analogy, but think of "Stairway To Heaven" for a minute - it's all about the steps, and not about the bustle in your hedgerow (roadbumps, for Brit-slang analogy challenged).

When Bob Gainey took over the Canadiens, one of the first things he said was that it is easier to make the players you have better, than it is to go out and get better players.

Tomas Plekanec and Mike Komisarek, to name but two, exemplify that truth. There are others.

Sergei Samsonov proves his point. Gainey won't admit he regrets that move, but you can be sure he does.

"A lady that's sure, all that glitters is gold", was John Ferguson Jr. emptying the wallet for Kubina, Gill, Raycroft, and Peca (remember him?). Glad the Habs aren't saddled with that fate, aren't you?

Against that, I'll take the Samsonov boob any day.

Gainey knows "the stores are all closed" now for most free agents, and is not willing to compromise the Habs ideals, in sacrificing the prospects the team has built up.

That's not saying Gainey will stand stone in the face of improvement. He'll just be wiser this time around.

In next summer's free agent market, that "spring clean for the May Queen", players who did not make their teams good enough this year, will become very attractive and luring. There may be one or two that fit the Canadiens plan.

"Sometimes all of our thoughts are misgiven" when it comes to who can make the Canadiens better overnight. Hopefully Gainey is not distracted by the "rings of smoke through the trees, and the voices of those who stand looking" in the press.

The media will scorch him badly, starting tomorrow, and suggest that there is "still time time to change the road" the Canadiens are on. But even thought the club has missed the playoffs, Gainey and the team are on the right track.

The GM will immediatly begin the daunting task of ridding the club of those who do not fit in any longer, whether it be monetarily or compositionally in order to get to a place where "all are one and one is all."

Now I've pushed this Led Zeppelin lyric as mantra-for-hockey-life far enough - point taken! You can make your own "to be a rock, and not to roll" euphemism's from here.

Reading between the lines of these Stairway-isms, is to understand that Gainey will again be preaching patience and youth as the road to improvement, even if it has taken a slight step sideways this April 7, 2007.

As those nine players grow in experience, their invaluable learning will be combined with that of those who've been to battle, and that will eventually make the group stronger, one step at a time.

If I am able to focus squarely on such positives, those plentiful silver linings I see, it may have much to do with observing 8 Stanley Cup wins in my first 17 years of watching the Habs from 1969 to 1986. I got a bonus Cup in 1993 I did not expect.

Of course, in a 30 team NHL, things have changed. It's much tougher to dominate when a team is one of 30 teams, and no longer one of six.

Have faith in Bob Gainey's ways and patience, he's been there and seen that, and is doing what it takes to make it happen again.

You're witnessing it now.

Have faith in those steps and silver linings.

That's the stairway to the Stanley Cup!