Share All sharing options for: Crosby In Gretzky's Mold 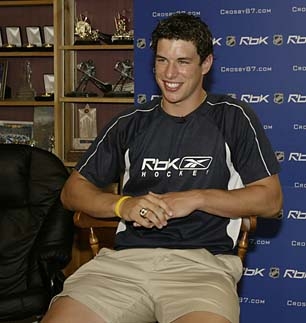 Crosby was sought out by the boo-birds each time he touched the puck during the first game of the Ottawa - Pittsburgh series. Fans cheered the referee when he disallowed what would have been Crosby's first career post season goal, and he was litterally jeered upon finally scoring it late in the game.

The fans hounded this hockey marvel, a serious young man, mature for his age, for whom the integrity of his sport are a priority, because despite his age at 19 years, he has the talent and wherewithall to put an end to the Senators playoff hopes.

Crosby has been annointed hockey's successor to Wayne Gretzky and Mario Lemieux, two of the best on-ice "artistes" the sport has known. The Citizen even predicts that one day, Crosby will receive the Order Of Canada.

Nothing about any of those claims is exagerrated. Crosby has many of Gretzky's offensive tools, he has the calm of Lemieux, and even demonstrates the off ice class of Jean Beliveau.

One of his strengths, according to people on the team who are closest to him, is always knowing what is going on around him. He pays astute attention to detail. He is conscious of his responsabilities and meets them without batting an eye. 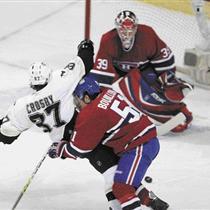 Many demands were placed on him when he arrived in Pittsburgh at 18 years of age. After the lockout in 2004, the NHL desperately needed a selling point. Not only did he inherit the task of promoting the Penguins cause, meeting the obligation of the Pittsburgh market, but the league handed him an unheard of amount of public relations and press duties for an inexperienced adolescant.

In a sense, it contributed to making him what he rapidly became: a young athlete perfectly conscious of his professional responsabilities.

When Mario Lemieux arrived in Pittsburgh in the mid-eighties, it took the press and the player a few years to warm up to each other.

When Crosby arrived in Pittsburgh he was already a savvy, and media friendly personality.

Going all the way back to his Pee Wee years, he was a center of attention. In the Junior ranks he was sought out by every major sports publication and television chain. He was, at that point, grounded in familiar territory by the time media giants decided he was their monster.

While several athletes of such stature tend to avoid and even shun the press, Crosby doesn't balk at his obligations, as he sees them. He's become even more in demand during his first playoffs.

Though he won't sit down for personal interviews, he's hauled into a press room daily, after each practice and game to satisfy the hordes of mics and camera's. It's replay of Gretzky's glory days.

As did Gretzky, the whole deal gets to be a bit much at times, but you'd never know it watching Crosby. After the first loss to the Senators, he was extremely disappointed with the result, yet still spent a lengthy amount of time answering questions about what had gone on. He was calm.

He had an answer for each query. He got through it all displaying a stunning amount of maturity.

It is said of him however, that he's not keen on the press conferences that involve only himself.

He would prefer to deal with the onslaught of question from the middle of the dressing room, amongst teammates, in the environment he is most confortable in. The vice president of communications for the Penguins, Tom McMillan, who is in charge of a team of public relations people guiding Crosby as he meets the demands, while allowing him time to breathe, explains the star's daily routine.

"Each day, he knows what's ahead of him as far as meeting the media's concerned. He meets this large task by accepting it as simply part of the job description. He doesn't ease away from any of it. After a game, he heads to his locker, strips his equipement off, and waits for it. Whether the team has lost 7-1, or won 4-0 makes no difference. He's there either way."

McMillan states that this demeanor was never suggested to him by the team. He simply understands it's his job. He knows in doing so, he's met his responsabilities straight on. Each days session tends to be lengthy enough.

While doing this, Crosby surely knows he's taking much of the pressure of the media off his teammates backs.

Last seasons Penguins, led by washed up veterans, endured a miserable season. After games, the dressing room emptied quickly, leaving an 18 year old fending for himself in attempts to explain what had happened on the ice. Crosby must have wondered if this was to be his fate in his NHL life.

His attitude was already like Gretzky's was in his twenties. He did what he had to do, and said what had to be said. He is apparently so concerned about the extent of his actions and words that he often asks the entourage is he has gone about things correctly. 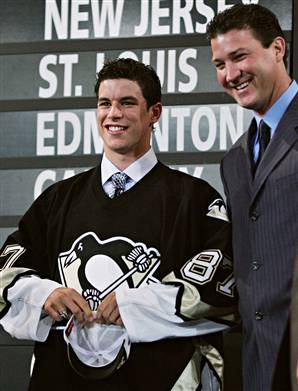 His demeanor keeps everyone ego's in the dressing room in check. He doesn't play up to the star treatment. He goes about the business of it all modestly, without the slightest trace of being self-impressed. He handles his reponsabilities with tact.

"When the team's best player conducts himself in such a manner, it's impossible not to follow", says Gary Roberts, himself the picture of a grisled veteran.

When Crosby is offered the chance to show his appreciation to those around him, no one is left out. When companies whom he endorses, such as Reebok, send gifts his way, he makes sure that teammates, coaches, and even trainers become recipients.

At the end of the season, it is tradition for players to generously take up a kitty and give a sizeable tip to the dressing room attendants who clean and wash up after the players.

Last season, each member of the teams press corps received an envelope from Crosby, as thanks. It blew them away. These folks are paid by the team for their services, but it was Crosby's way of showing them that their hard work and contributions did not go unrecognized by him.

LIFE WITH THE LEMIEUX FAMILY

Inviting a rookie to live in the owner's mansion seems to have been a stroke of genius. It was the ideal way to prepare the player for the big adventure he was about to undertake. Smartly, it was also the proper way to protect the franchise's biggest investment.

That Crosby would remain in the house in his second season is a sure sign of maturity. Crosby surely has the finances to purchase his own fancy pad and spread his wings.

Both Lemieux and Crosby are very discreet when it comes to discussing the relationship between the two. All that's been offered up is that the Cole Harbour N.S. native is at home is his new home. The owner's kids adore him. He plays ball hockey with Mario's son Austin.

The mansion is sufficiently large enough for Crosby to have his own detached quarters. No one steps on his toes.

Lemieux is not the type to impose himself upon Crosby, offering unsolicited advice. Should Crosby feel the need to approach Lemieux for advice on any matter, it starts with Crosby first.

In the first year, the setup was tailor made to suit Crosby's need. If the player has returned for his second season, it's speaks that the experience was a positive one for all concerned.

The fact that Crosby, as the NHL's brightest star, would chose to remain in a family context, is very telling of the young man's personality. Most guys his age would be showing off their downtown loft.

Lemieux is a person of incredible resources in the day to day Crosby life. Lemieux has made every step Crosby is about to, without being the beneficiary of such a launching pad of expertise.

Mario made his steps on his own, taking five years to accomplish what Crosby achieved in two - leading the Penguins to the playoffs. Lemieux got his hands on the Art Ross Trophy in his fourth season, Crosby reached it in two, at 19 years old.

His success is due in large part that he is living in the house of the best teacher he could possibly have. A Hall Of Famer who can safeguard him against all the trapping of celebrity while teaching him some of the intricacies of the game.

It should be no surprise that Crosby seems more mature than his age. He has learned so many things in one season that have had a maturing effect on him as a professional.

When he arrived in Pittsburgh, he was thrilled at the though of sharing the same dressing room as Mario Lemieux, possibly even getting a chance to play on the same line. Sadly, the experience was over too quickly.

When the penguins owner was forced into retirement by a heart ailement, Crosby was to realize that even the greatest of stars weren't indestructible.

"Watching from so close, what he had to go through daily, was very hard for me to witness", Crosby admitted.

"I understood to what point Mario loved the game. I tried putting myself in his shoes to understand exactly how he must have been feeling, how hard it must have been not getiing in the car each day to drive to the arena."

He lived through many things in a memorable first season in Pittsburgh.

His first coach, Ed Olczyk was fired and replaced by Michel Therrien.

One of Therrien's first moves was to appoint Crosby an assistant captain. The move caused quite a stir of derision around the league as many said Crosby was either too young or too inexperienced for the role.

Team Canada, managed by Gretzky, passed him over for the Turin Olympics.

When Crosby complained about officials calls not going his way, as opponants took liberties with him, he was termed a crybaby.

He watched a teammate, Zigmund Palffy, retire and leave $10 million on the table due to a shoulder injury that would not heal. The gesture was an eye opener on a rare display of professional integrity. 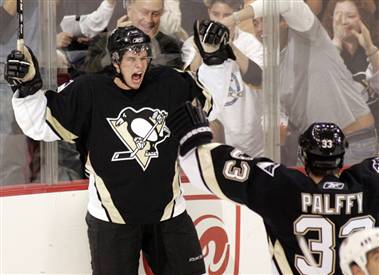 Crosby's answer was deeply surprising when he was asked which moment in his first season left the biggest impression on him.

He recalls a game in Long Island, where he found himself playing alongside of Lemieux. For the first time, a play between the two clicked. Lemieux found him open, threaded a pass, Crosby caught it and scored.

At the time, the significance never struck him.

"I didn't pay much attention to what had just happened, but after he left, it became a moment I'll remember for a very long time", he said.