According to Trevor Timmins, Canadiens' future filled with promise

The Canadiens' Director of Player Personnel discusses the up-and-coming prospects in the Habs pipeline.

Share All sharing options for: According to Trevor Timmins, Canadiens' future filled with promise

During the course of the past week, Canadiens fans heard the raves of GM Bob Gainey, coach Guy Carbonneau, and team president Pierre Boivin regarding the Habs crop of youngters set to battle for positions on the team in the coming seasons. The most prominent of these names, Carey Price, has just begun his pro career in Hamilton and will surely be garnering much attention.

Canadiens director of player personnel, Trevor Timmins, who is presently scouting at the World Under-18 tournament in Finland, recently sat down with Martin Leclerc of Le Journal de Montreal to discuss the progress being made by a dozen Habs hopefuls. The picture he paints in his assessments of the players points to some interesting decisions come training camp next September. It is almost assured some of these players will be in Carbonneau's starting lineup come October.

Here are Timmins' evaluations on the best of the prospects, by position. 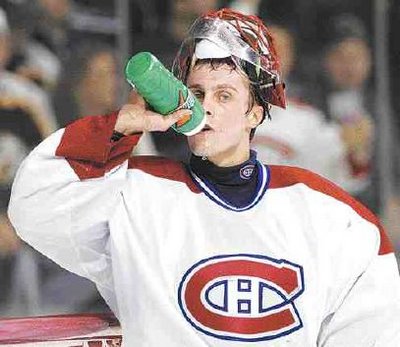 "Jaroslav will be a serious candidate for the backup goalie position at the next camp. He's calm and excels in pressure situations. In his draft year, at the under 18's in Russia, he stopped Alexander Ovechkin in shootouts. Fans in Montreal have already caught a glimpse of what he is capable of when he starred for the team down the stretch. It will be interesting to watch his perform at the World Championships."

Note: Halak had a .932 save percentage in 28 games with the Hamilton Bulldogs before being called up to Montreal. He was chosen to play in the AHL all-star game and was named to the leagues all-rookie team. 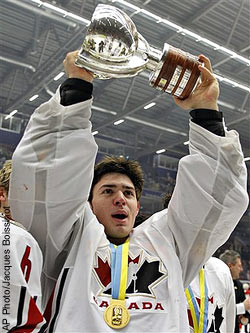 "The whole world over watching him be named MVP and best goaltender at the recent World Junior Championships. Friday night, he played and won his first professional game and was named the first star," Timmins said giddily.

"Carey is a goalie with an imposing stature and he uses the butterfly style selectively. He's always square to a shooter," added Timmins.

"His junior team this past season, the Tri-City Americans, were not a strong club. They made the playoffs due largely to Carey's contribution. They were knocked out of the playoff early because of a lack of scoring. The upside is it gave him a chance to head to the pro ranks sooner."

Note: It is almost assured that Price will be the starting goalie for the Bulldogs next fall. With the Americans this season, Price had a .917 save percentage. 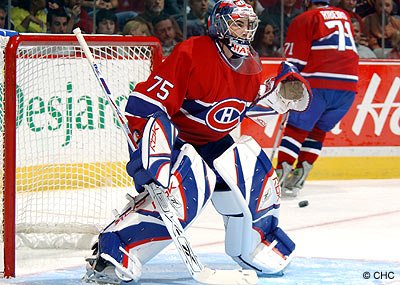 "We'll be watching Yann closely as he finishes out the year with Hamilton. His situation will be re-evaluated once the season is over."

Note: Danis had a .905 save percentage and had a good season in Hamilton. He is currently winding out the final year of a two year contract. 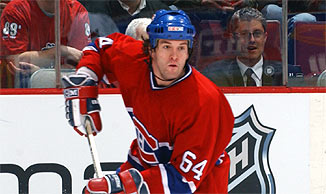 Everyone was predicting that Cote would battle for a spot on the Canadiens last fall, but a knee injury set back those plans.

"J.P. made a few steps back at the start of last season, which can be attributed to the injury he suffered. He's not the best skater to start with, and troubles with the knee relagated him behind some others in his progress. Towards the final two months of the season, he became himself again and was a serious candidate to be called up to the Canadiens."

Note: Cote, a defensive defenseman, scored 3 goals and 9 assists with the Bulldogs this season. He added 115 penalty minutes to his totals.

It was thought that Carle would be in Hamilton at this point, but his junior team, the Rouyn-Noranda Huskies are still in the QMJHL playoff picture.

"Mathieu's season was split into two halves. When he started out with Acadie-Bathurst, his game was more offense based. Since the trade, he's been practicing a tighter style of play. Regardless of the changes, he is having an excellent playoff. He's a defenseman that helps circulate the puck very well and he excels at the transition game. Both those assets will suit him well at the NHL level." 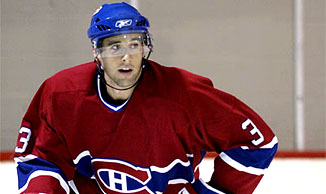 O'Byrne's was the first name brought by Timmins when it came to the teams defensive hopefuls.

"His play has made significant progress since the new year. His case is particular in that he needed to adjust a longer schedule than he'd been used to. At Cornell University, the season begin in November, so he's had to adjust as far as fatigue goes. His progress reminds me of how Chris Higgins adapted."

Note: O'Byrne is 6' 5" tall and weighs 235 lbs. A stay at home type, he registered 125 penalty minutes. He'll be one of the more closely watched prospect at camp, as he is the odds on favorite to make the jump. 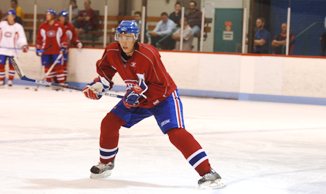 "David had a good season with University of Minnesota Gophers and the won the NCAA Championship. He went through adjusted periods during the year, having graduated from high school games just this past season. The calibre of play is much stronger, against much larger players. David honed his defensive skills greatly, practicing a tigher style of play. We are very satisfied with how he is coming along."

Note: Fischer, who's been described as an offensive defenseman, accounted for only 5 assists in 40 games during his first season. That can be explained by the fact that he was a rookie and recieved no powerplay time, as the team has great depth in that area. 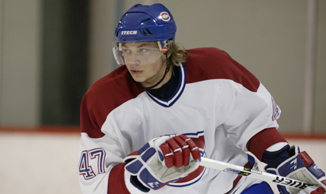 Sergei is the younger brother of Andrei Kostitsyn, would split the season between Hamilton and Montreal.

"This player is a true winner. At the rate he is progressing, he is turning out to be one heck of a seventh round pick!"

"Many experts, who've witnessed alot of OHL action this season have suggested that he was the league's premier player. Sergei excels both offensively and defensively, and has very good work habits. He may even be a better skater than his brother. His skills are very sharp. He's scored goals this season while his team was shorthanded playing five on three! Not only that, he can play a rugged style as well."

Note: Kostitsyn finished third in OHL scoring with 40 goals and 91 assists with the London Knights. 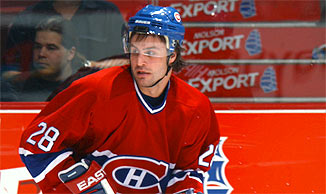 "He had a very good season in Hamilton. He demonstrated his worth by quickly becoming a leader on and off the ice. He has lots of character and intensity. Despite being a rookie, he never hesitated to drop the gloves when necessary. He has killed penalties as well as performing on the power play. He is the type of player who helps a team win games like the Canadiens last game in Toronto."

Note: In the Canadiens circles, Chipchura's effectiveness is said to compare admirably against Radek Bonk's talents, who he will likely be called on to replace soon enough. His totals in his rookie seasom were 12 goals and 27 assists. 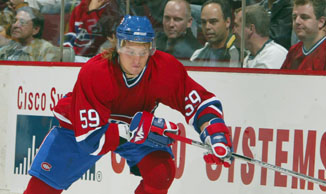 "His skating prowess is dominant and his potential will allow for him to battle for a spot on the Canadiens in September."

Note: Grabovsky is a speedster than reminds one of Maxim Afinogenov. He tallied 17 goals and 37 assists in 66 games with Hamilton and made an all too brief 3 game stint with the Habs. 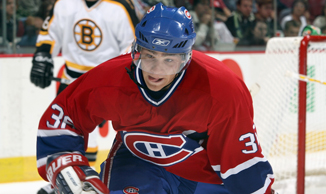 "He had a big year in Hamilton. Generally, he goes unnoticed on the ice until something happens. The game he played at the Bell Centre was a real eye opener for him. He's alot like Mike Johnson in that he goes about his business quietly, and you'll only notice him once he's scored a goal or two. He's the kind of player that gets the winning goal in 2-1 games."

Note: D'Agostini is a right winger who notched 21 goals and 28 assists with Hamilton in his rookie campaign. 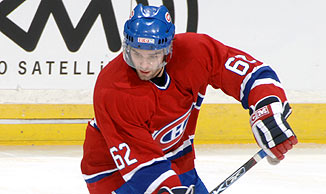 "Milroy had a breakout season this year. He played a few games with the Canadiens this season and is expected to battle for a spot come training camp. Milroy's game isn't crash and bang - he's a shooter and has many good qualities. He's typival of certain late bloomers who continuously develop step by step."

Note: Milroy was Hamilton's leading scorer with 25 goals and 33 assists. 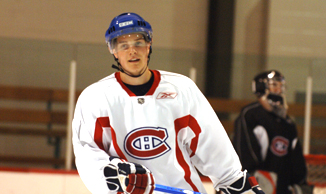 "He was the leading goal scorer in the WHL at the time of his elbow injury last season. Maxwell has tons of potential. We believe he has what it takes to become a number one or number two center in the NHL."

Note: Maxwell had 19 goals and 34 assists in 39 games with Kootenay Ice last season.

Unfortunately Timmins didn't speak about other prospects such as Ryan White, Pavel Valentenko, or Alexei Yemelin. Clicking on their names will bring up their stats at Hockey Database.