A Weekend Of The Best Kind Of Hockey Fun

Share All sharing options for: A Weekend Of The Best Kind Of Hockey Fun Poke Check, a.k.a. Crystal L, first from the right.

Just a quick note to regular readers wondering why the content has gotten thin over the weekend.

I'm off in Brantford as of now for Poke Check's trip to the 26th annual Walter Gretzky Tournament. Her team, the Cornwall Pee Wee B Typhoons won this baby last year and we we're hoping to meet the Great One's Dad, but lucked out. Wally had just returned, slightly pooped and tired, from a disappointing Olympic experience with Wayne and made only a brief appearance. We're hoping this year that things will work out again and maybe, just maybe, the kids'll get to share a laugh and a picture or two with Mr.Gretzky.

For some fun reading, down below, I'll post my game summary that I do for the team's website and the local paper. We have a little 10 year old star, two years younger and a foot shorter than every other girl on the team, who had one wicked game!

That 6-0 win put our team into the Provincials tournament next month. It was nice that Poke Check banged in the game's opening goal to get the run started.

I'll soon be undertaking a major project here at EOTP. Since there are, give or take, 110 days until a new Stanley Cup winner is championed, I thought I would go just ballistic and try to post a different Cup winner for each year, every day, leading up to the day in early June when it's won again.

It should be quite the task. I have already begun to collect information for those posts, to get this marathon underway. You'll notice in my sidebar, that there are 6 done so far. The latest are the first Cup wins in 1893 and 1894 by the Montreal AAA. Others have included the 1907 Kenora Thistles, the 1915 Vancouver Millionaires, and legendary Leafs and Wings teams.

If any readers have any suggestions as to how they'd like to see me proceed with this, feel free to drop ideas in the comment box. I'm wondering if I should start chronologically from 1893 and bring it to the present, or randomly jump around from era to era. Anyone having a link to pertinent content for a given year can send that along also - I'd be quite happy to add it into the post at any time.

On occasion I like to pass a plug along for other blogs that I find of interest and three that always keep me coming back for more are Joe's Pelletier's Legends Network, E's Theory Of Ice, and Current Habs History And Opinion.

Joe's topics have branched out alot lately. I always never ( ! ) know what I'll find there on my daily visits. Today I learned how how a trip to the dump can change one's life. Joe had a thought to turn his hockey altering life moment into a blogger tag - not a bad idea. I may just tag along when I get back home.

Mine, has to do with Guy Lafleur.

E at Theory Of Ice wrote about the trade deadline with a more human perspective than any blogger you'll find. The posts there are so well thought out and introspective, that one learns just as much about oneself, as they do of the topic, when reading it. That's a feat few can accomplish! The site is deep in that way. You might actually find yourself going back to read something over again, as I often do. Be sure to check out "What We Could And Couldn't Do" and "The Soul Of Nowhere". E will one day write a best seller on hockey that will be compared to Dryden's best work, I am convinced!

For the end all on Habs content, Matt's Current Habs History And Opinion has got it. This young journalist shares his Canadiens insights with readers on a very personal level. He's just suffered some blows as his favorite players have taken hits, and gotten traded. He's actually even taken a hit himself, of the fender bender variety. He also has his hand in at Habs World where even more content is linked to. Within a year Matt will have the best Habs blog going - check him out! 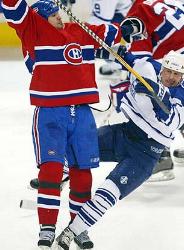 Other interesting reads I stumbled across today were Zanstorm's joke at Waiting For Stanley - absolutely hilarious! There's an article on Anaheim GM Brian Burke's trade diary that sheds some light on the inner workings of a GM at the deadline. Precious and funny stuff - if you think like Burke. Finally, a piece I was happy to read, on Sheldon Souray's summertime decision on the Habs resigning him. I call this good news, and you can learn more about his complicated relationship with actress Angelica Bridges that could make or break his stay in Montreal.

Finally, my hometown of Cornwall has earned a Kraft Hockeyville prize. A nifty $10,000 bonus comes with being given the Family Merit Award. I wish I were able to link to the city's submitted clip, as Poke Check's class is in it at the very end shouting "Cornwall is Hockeyville." I was in class at the time, filming with my digicam, and may be uploading that clip here in the near future.

Hopefully, in my technicolour dreams, I'll return to town to read much on the Canadiens back to back wins over the weekend. Now is catching RDS west of the Big Smoke a pipe dream?

Enjoy the reads, all. Have a good weekend!

Here is the Cornwall Typhoons piece from my local paper, the Standard-Freeholder.

The Cornwall Pee Wee B Typhoons are off to the Ontario Provincials!

Edging Napanee 3-2 in the Cornwall opener, the Typhoons came from behind to get a 1-1 draw in game two in Napanee. As familiarity with an opponant breeds a more precise game plan, the Typhoons executed perfectly in sweeping to victory.

The Typhoons started early when Jenna Merpaw spotted Katryne Villeneuve, alone behind the Napanee goal. Villeneuve fed Crystal Lefebvre at the edge of the crease and the winger popped it five hole for the early lead. Minutes later, a pretty give and go from Taylor Samson to Villeneuve and back, gave the Typhoons a 2 goal margin. Before the period was out, Lefebvre hit Villeneuve with a pass and her rising shot rolled over the Crunch goalie's shoulder. Merpaw was "Johnny on the spot" to tap in the rebound and put the game out of reach.

Villeneuve added three goals to her three assists to round out the scoring. On the first, she intercepted a mid ice pass to burst in and deke a helpless goaltender. She added two more in the third period for the hat trick.

Playing with the comfortable lead, a total Typhoons team effort was needed to shut down a Crunch team that wouldn't quit. The Napanee squad features several backliners capable of blistering slapshots and a bevy of sleek offensive moves. Typhoons forwards Caitlin Champagne and Allison Boots, both quality penalty killers, spent the game blocking point shots and turning chances up ice. Goalie Bianka Emmell was rarely left alone with shooters, and foiled the Crunch's best chances at every turn.

On defense, the Typhoons rearguards make few mistakes in limiting the Napanee opportunities. Lauren Seguin and Myriam Lefebvre kept all Crunch attacks on the outside. Josee Daze handled one on one's with expertise. Chantal Quenneville was a physical presence in the corners and along the boards. All four played poised positional play, handing their forwards well timed passes that gave the game its fast pace.

Rounding out the points for the 3 Napanee games were a pair of markers from Villeneuve, with a single to Seguin, 2 assists to Bianca Lemire, and one each for Crystal Lefebvre, Myriam Lefebvre, Daze, Champagne, Merpaw and Villeneuve.

Achieving the Provincials is quite an accomplishment for the Typhoons who have had their fair share of hard luck earlier in the season. The team is currently on a 8-2-1 roll since making the finals in the Nepean tourney. Full credit to coach Dave Merpaw and assistants for their work and dedication.

The Typhoons next adventure is the 26th annual Walter Gretzky tournament in Brantford starting March 1st.