Share All sharing options for: Plekanec Helps Habs To Gel 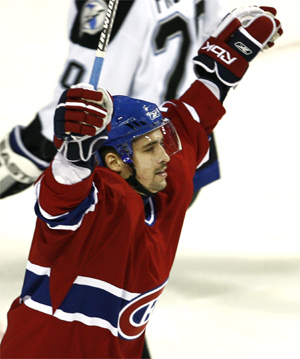 Six weeks of line juggling by coach Guy Carbonneau has finally settled into some winning line combinations. The coach owes no small amount of thanks to his steadiest player, Tomas Plekanec.


In a promising season derailed by two flu viruses, team chemistry issues, goatending concerns, a tragedy, and a pair of Russian gossip sideshows, the dust has cleared to reveal a similarly strong set of four lines comparable to those that had early season success. Getting from there to here hasn't been an easy task.

Lately, the coach has seemingly blown up the early season blueprint. Combinations of players mired in slumps so deep were cast away, and the coach has gone with what has worked best. As often happens, happy coincidences such as the exiling of Sergei Samsonov, the Alex Kovalev elbow and vertigo incidents, and the callup of Andrei Kostitsyn, have led to the constant shuffle stabilizing itself into some very workable trio's.

The gel giving Carbonneau a starting point has Tomas Plekanec for a name.
The Canadiens center was the teams best player for the months of January and Febuary when everything else on the club was going south. The well rounded player has been on close to a point per game pace throughout all the mire, which seems odd as little else was working with any consistancy.

A newly formed trio of Plekanec, Kostitsyn, and Chris Higgins has been the Canadiens main thrust in it's playoff surge down the stretch. The combination of grit, speed, and strength has caught unsuspecting teams off guard, as it gathers the oppositions best checkers as well.

Added to Plekanec's side, Kostitsyn has been something of a revelation. Though it took him a matter of games to get going, the Belarusian winger has learned that in using his size going into the tighter spots, it has enabled him more puck time to put to use excellent passing a shooting skills. The kid looks as strong as a bull out there, to the surprise of many.

Higgins on the other hand, is working harder alongside Plekanec. Used to relying on his talent around the goal while paired with Koivu, Higgins in now placed deeper in the offensive zone. His three assists against Boston last Thursday attest to his success as a playmaker whose grit is essential to a line's prowess.

Again, one must point to Plekanec as the glue holding the three together.

What the Czech center does with very little fanfare is cover his wingers well. Not only does Plekanec feed them passes that originate from the middle of the ice, he has an instinct for knowing when, and when not to, commit himself deeply into the opposing teams zone. He has, after all, been groomed as a responsible two-way forward and is quickly developing into a better than average face-off man.
Earlier in the season, when saddled with Sergei Samsonov and Alex Kovalev as wingers, Plekanec hadn't been able to justify his skills and assets. Most often, Kovalev handled the puck, taking it over the blue line with the play dying at the right boards. It was unknowingly playing into a teams trap setup. On the lines opposite side, Samsonov, starving for puck time, would grab the thing, spin and auger himself into the ice.

Success has led to Plekanec receiving more ice time, and we all know what happens when that occurs. The confidence Plekanec has accrued has quickly translated to his wingers, who are not unfamiliar with his game, as the three were paired (How's that for a Yogi Berra-ism?) together in Hamilton prior to graduating to the Canadiens.

Another offshoot of the sound Plekanec line has been that it has enabled the Habs top line of Saku Koivu's to become more defined. With sharpshooter Michael Ryder on one side, Carbonneau places either Steve Begin or Guillaume Latendresse for some added crash and bang. Ryder and Koivu have employed the newly created space well. Ditto for Alex Kovalev, who is less domineering when centered by Maxim Lapierre. Taking some of the focus off himself has also freed Kovalev to be more creative, and that's the key to his success.

If the Habs are playing at home, Carbonneau has the choice of countering the other teams top line with the Bonk and Johnson duo. The pair has been completed at times with the likes of Begin, Latendresse, or Mark Streit. Should Carbonneau choose to undo matchups he feels are to the other teams advantage, he inserts the Plekanec vis-s-vis the opposing top lines.
As Carbonneau is a strong beleiver in rolling four lines, exactly how does an opposing coach treat a third or fourth line that features Alex Kovalev, Maxim Lapierre, and Guillaume Latendresse? As no team wants to line it's three minute a game goon on Kovalev, it binds their posibilities.
That style of coaching is a Carbonneau trait, and is likely the key to the teams surprising third period record.

Having a steady goaltender who prevents defensemen's necks from spinning 360 degrees like Linda Blair on Red Bull hasn't hurt the team either.

The conundrum that is the 2007 Habs been a difficult one to analyze. The team still parlays the leagues best powerplay, while being ostensibly brutal 5 on 5. It has amassed close to a third of its points (24) in third period comebacks. So where's the team during the first 40 minutes? It was also ranked a league best on the penalty kill when a lack of discipline sabotaged the PK unit's steadiness. Considering all this, why is it that a team that started the season seemingly well, and is ending it on positive notes, still fighting for its playoff lives?

It certainly is a puzzle to ponder, especially while many of pieces are fitting in place.

One of the first things Bob Gainey suggested when taking over the GM's role 4 years ago was that it is simpler to take players and make them better, than it is to get better players.

What I'm seeing is Gainey's team concept plans coming into fruition. It is a plan exemplified by players such as Plekanec, who are growing into their roles.