Playoffs Or Not, Habs Future Starting To Show

Share All sharing options for: Playoffs Or Not, Habs Future Starting To Show 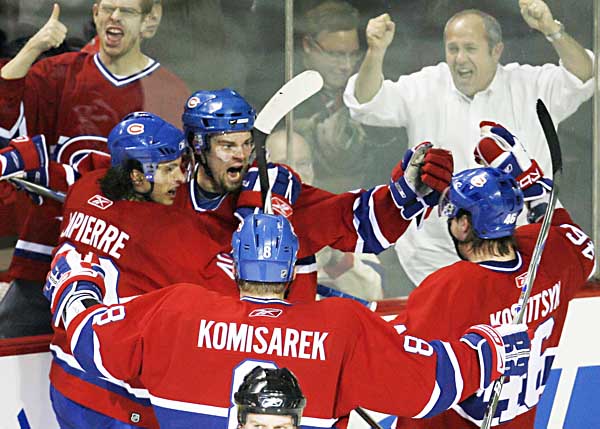 There is a certain comfort that has come with watching the Canadiens play these past 5 or 6 games. While most Habs fans are focused on the playoff drive, many are taking great pleasure from the play of a group of players that tend to be scrutinized individually, and not often consider as a whole.

The Canadiens youth and future are having their say, a big one at that, in whether the Habs gain the post season. To youngsters aged anywhere from 19 to 23, these final games of the 2007 season are as valuable experience-wise as any playoffs could hope to be. When teams buckle down at this time of year, they inevitably dig into the trenches, guided by savvy veteran leadership and poise.

The Habs seem to be doing it with youth sooner than expected. 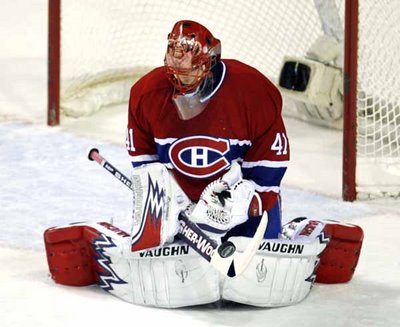 The Canadiens kids, to the sweet surprise of many, are presently flourishing under the gun, That bodes extremely well for the teams future. While the veterans of the team are surely a calming influence, the game breakers in the past few wins have been the likes of Guillaume Latendresse, Jaroslav Halak, Andrei Kostitsyn, Tomas Plekanec, Maxim Lapierre, and Chris Higgins.

What is most comforting in all this, is that soon enough these kids will form the core of the team.

Bob Gainey will inherit much of the acclaim for sticking to a sound plan while bringing these prospects up in the Canadiens organization. He is continuing a job very well done by previous GM Andre Savard, who it should be remembered was a prime architecht in the successes of the Ottawa Senators and the Colorado Avalanche over the last decade. Savard is now in the midst of another youthful uprising as assistant coach of the Pittsburgh.

Gainey and his scouting staff have essentially added to Savard's resume, drafting such can't miss kids such as Latendresse, Carey Price, and David Fischer.

Taken all together, once the young players currently on the roster, those on the fringes of the NHL with the Hamilton Bulldogs, and those remaining in junior, mature into bona-fide NHL'ers, the Canadiens should become a team to reckon with for years to come.

Perhaps when the majority of the young guns "arrive" in the NHL, the days of clinging to hopes of grabbing the 8th seed of the playoff round in the seasons final days will be a thing of the past.

What will become of prime importance for Gainey and the organization in the upcoming years, will no longer focus as much on what deal to make at the trade deadline, but will revolve around which players to keep in the organization and which assets to shed.

It may have already started with the trading of Craig Rivet to San Jose, in which the team added a yound promising defenseman in Josh Gorges and a pick 20 players or so deep in the 2007 draft.

When I mention that shedding assets will be key, dollars and sense come into play as much as timing does. Younger players, while being cheaper on average, need proper grooming and ice time in order for their confidence to rise with their talent. With eyes on the salary cap, it's not a bad route to choose.

It is important that the teams philosophy of the past in terms of managing prospects enables more youth to stick with the team sooner than later.

Three great examples in recent years of the Canadiens offering up prime ice time and opportunity to younger players came about from injuries to players higher on the depth chart.

Richard Zednik became a regular question mark four seasons ago, in stepped Michael Ryder. Chris Higgins gained top line status last season under similar circumstances and thrived in the opportunity. This season, when Higgins went down, in stepped Latendresse to take up the slack and in the process alter the dynamic of the line. Lately, Sergei Samsonov's fumbles have been Andrei Kostitsyn's yardage.

The youthful core of the team in which I speak looks this way. Players drafted during the Savard reign are noted with an *. This is merely a list, not a ranking.

Presently on the roster, full time in Montreal:

Tomas Plekanec*: Sly and slick centerman who has learned to thrive in the corners and along the boards.

Maxim Lapierre: An irritant and pesty type in the Tucker and Linseman mold who's not shy in any game situation.

Any excuse to run this pic is good enough for me!

Latendresse: Power forward with great size has the ability and composure to change a game's course when on.

With Hamilton Bulldogs and has seen NHL action:

Andrei Kostitsyn: Making a name for himself with the big club. Consistency will keep him there. Skills galore, must continue to use his size to his advantage.

Jaroslav Halak: Has shown he can succeed at the NHL level. Should be Huet's full time backup next season.

Mikhail Grabovski: Loaded with offensive ability and speed. While size is a slight concern, he could go on to be either Briere or Samsonov. His work ethic will determine his path.

Matt D'Agostini: A gamer with an eye for the net. Continued hard work should give him a shot at call ups next season.

Kyle Chipchura: A strong defensive forward, could push for Bonk's role as early as next year. Extremely good leadership capabilities in the Gainey and Skrudland mold.

Corey Locke: Small offensive center working on complete game. Two-time CHL player of the year will make or break his time in Habs organization in AHL playoffs this season.

Still in junior, university, or overseas:

Sergei Kostitsyn: London Knights superstar has offensive flair and playmaking ability to possibly become better than older brother. The best of the Habs prospects, along with Price, still in junior.

Carey Price: Point blank, the future in goal for Montreal. Showed the world what he's capable of in last WJC.

David Fischer: Good all around D-man paired with Erik Johnson at U of Wisconsin. A few years away but a solid candidate for the NHL.

Ben Maxwell: Good goal scorer near the top in the WHL.

Matthieu Carle: Not to be confused with San Jose Shark of a similar name. Leads CHL defenseman in scoring, needs work on toughness while yet to be fully formed out. Has an interesting offensive upside.

Since joining the Canadiens, Gainey has held onto prospects as a rule. In four seasons, he has surrendered but 4 players of note: Josef Balej (Kovalev), Marcel Hossa (Garth Murray), Ron Hainsey (waivers-Columbus), Francois Beauchemin (waivers- Columbus)