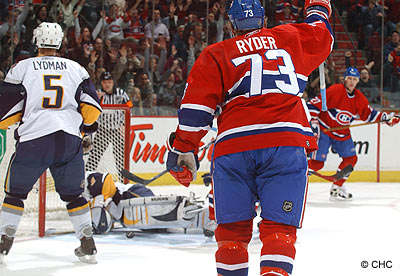 Here's how the Eastern Conference playoff picture looks heading into the final two weeks. Each team away games are in capital letters.

Four points separate six teams, so anything at this point is still technically possible. The pro's and cons for each teams chances are as follows:

Tampa: They have they most wins in the bag, and don't play a road game until their last match in Atlanta. They are 3 points up on the non playoff teams as of now, though two of those teams own a game in hand. As inconsistant goaltender has been their undoing of late, coach Tortorella has named Johan Holmqvist as his starter in goal the rest of the way. A split of their 4 remaining games should place them in the playoffs.

Rangers: One point behind the Lightning, Rangers have 3 of 5 left to play on the road, with 4 of those games against teams below them in the standings. They should make easy pickings of the Flyers and Islanders. One additional win against either of the other three opponants should clinch it it for New York. The Montreal and Toronto games will not be easy as they are perhaps in a more desperate place than the Rangers are. Their five remaining games are in an 8 day span. They hold their destiny.

Montreal: The Habs must win three of the final four and hope it doesn't come down to the last games in Toronto. A loss against Buffalo could derail the playoff express. Jaroslav Halak will continue in goal until fate is decided. Destiny is theirs if they sweep 4 straight, not an easy task. In their favor is their win column total of 40. With two wins added, none of the three teams chasing them can surpass 42. Points gained in extra play losses are not negligable added to this scenario.

Toronto: Three of the final 5 games are very tough challenges. Should they drop two of the first four, they need to hope Montreal does the same and catch them on the final night. The Ranger game is crucial to their outcome. A loss combined with a Montreal win could be almost fatal. Their destiny seems linked to Montreal fate at this point. Should Toronto win all 5 games, they would jump ahead of Montreal and make the playoffs. Their five remaining games are in an 8 day span also.

Islanders: Without goalie DiPietro, chances are slim. Two losses will pretty much eliminate them. With three road games and consecutive meetings with teams in the thick of the race might be too much to deal with. The Islanders practically need to sweep and hope either Montreal or Toronto wins less than three of their remaining games. The Islanders end the season on a Sunday when most teams have already finished the schedule.

Carolina: In the same boat as the Islanders. They must win 4 games and pray. Home and away games against the pesky Panthers are the only seeming breaks in their favor. By the time they play in Tampa, it could be all over. As three teams ahead of them own a game in hand, they will need help to get in.