The Next One will simply be the first John Tavares

Share All sharing options for: The Next One will simply be the first John Tavares 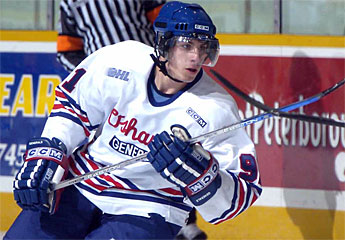 ( Note: Oshawa Generals sophomore John Tavares has broken Wayne Gretzky's record for goals by a 16 year old, notching his 71st of the season in a game last night. I've been accumulating articles on this young phenom for a bit now and they are posted at the bottom of this excellent piece from the Ottawa Citizen - check out the links.Tavares obviously has a good head on his shoulders, and will surely be a big hit when he reaches the NHL in a couple of years. By the content of the article below, he spends much of his time deflecting comparisons, most notably to Sidney Crosby. Tavares is quite simply his own player. Soon, it seems he will be a measuring stick for others to be compared to. Enjoy the read.)


"Any player in the NHL would be a great comparison, but when you name a guy like Sidney Crosby . . . but I don't know if I'll be able to do things he's done in the league because we're different types of players."

Tavares doesn't want to be compared to anybody. His first press conference in Oshawa, he said: "I am the first John Tavares."

A few days before the National Hockey League trade deadline, Oshawa Generals coach Brad Selwood fielded a call from a Sportsnet producer who wanted to know if John Tavares was available to appear on the network's Feb. 27 trade-day show.

Selwood, a career hockey man, wondered what a 16-year-old junior hockey player, still 21/2 years from being eligible for the NHL draft, could possibly add to the telecast. It turned out Sportsnet wanted Tavares not for his knowledge and insight, but rather to shoot pucks into a washing machine, just as Sidney Crosby did a couple of years ago on the Tonight Show with Jay Leno.

On his prodigy's behalf, Selwood said no.

On another occasion, a MuchMusic producer asked if Tavares could appear at 4 p.m. that day, live in studio, with the veejays. MuchMusic offered to send a limousine to pick up Tavares from school and to deliver him back to Oshawa afterward.

No dice. The Generals had practice, so Tavares's veejay career remained on hold.

Things are no different on the ice. Late in a recent Ontario Hockey League contest, with the score tied, Tavares took a pass at the end of a 2-on-1 break and fired wide of the net.

"He missed," yelled a man in Section 102 at General Motors Centre. "He's not allowed to do that."

Welcome to the world of John Tavares, alias "The Next One," "The Sensational Sophomore," "Hockey's New Prodigy," the "Five-Star General." Take your pick. He has heard them all. 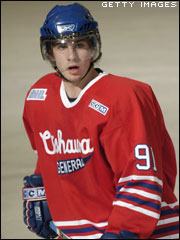 So, around prepping for his driver's test, school, girls, fans, autograph requests and everyday teen things, Tavares shoulders the burden of being the face of the OHL, the Generals and junior hockey in general, knowing things will only get worse in the two seasons still to come before some rebuilding NHL team drafts him first overall in 2009.

"It's something I get used to," the soft-spoken Tavares said. "Experience is everything.

"Brad and I talk all the time. He lets me know what's going on, and we try and set up an itinerary so I can live life normal and be normal."

"Normal" is not a word one would associate with the rising hockey star.

Tavares, who made his OHL debut days after his 15th birthday, had 45 goals and 32 assists in his first year with the Generals. During last night's game in Ottawa, the 6-foot, 183-pounder scored twice to break Wayne Gretzky's league record for goals by a 16-year-old. He has two games left to add to his total of 71.

About the only time Tavares came up short was in December, when he failed to make the Canadian roster for the world junior hockey championship in Sweden. But he's a virtual lock to be on the Canadian squad for the 2008 world tournament in the Czech Republic and the 2009 event in Ottawa. 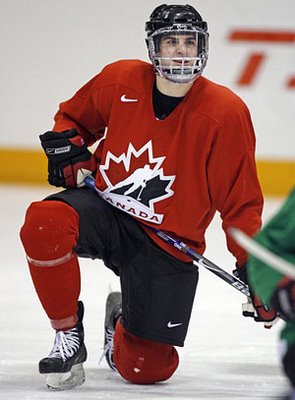 What's just as impressive is that he has been exactly as advertised.

Some day, there just might be a sign at the General Motors Centre much like the one up there now for the City of Oshawa, which reads: "Prepare to be amazed."

Chances are you will be.

OHL officials knew they had a "problem'' after Tavares blew through minor midget with the Toronto Marlboros in 2004-05, scoring 91 goals and 67 assists before finishing up that year in Tier 2 junior with the Milton Merchants, adding 13 goals and 15 assists in 20 games.

All that spring and into the summer, the OHL hedged on what to do before it finally created the "exceptional player" rule, allowing players to apply to be eligible for the league's draft at age 14. The normal standard had been, and really still is, that a player must turn 16 by Dec. 31 of the year he is drafted.

The "exception" allowed Tavares to become the youngest player ever drafted, though Generals legend Bobby Orr remains the youngest to sign and play in the OHL, making his debut at 14. Tavares played his first OHL game three days after turning 15.

Coach Selwood is old school. He played for Hap Emms on a Memorial Cup-winning Niagara Falls Flyers team in 1968.

Agent Bryan Deasley of Siskinds Sports Management in London, Ont., is new school. He played at the University of Michigan and was a first-round selection of the NHL's Calgary Flames in 1987, but never quite panned out.

Selwood, Deasley and Barb Tavares, John's mother, talk all the time. During a game, agent and mother often sit together. After the game, they huddle with John in the parents' lounge. Joe Tavares, John's father, is the quiet one, the one you'd never know was in the room.

"I played with or against Gordie Howe, Dave Keon, Bobby Hull and the like. Now, a lot of guys could change the outcome of the game, but no one could take control of the game like Bobby.

John doesn't want to be compared to anybody. His first press conference here, he said: 'I am the first John Tavares,' and that is it.

"He's a great kid, but he's still a kid. We want to let him enjoy his youth, wear his toque and go out and be one of the guys."

Selwood gets asked all the time what coaching Tavares is like.

"People phone all the time and ask me to compare him to Sidney Crosby," Selwood said. "First of all, I have never met Sidney Crosby. But John Tavares doesn't want to be compared to anybody. He said when he first got here: 'Just let me be me,' and that's the way he is.

"He's a great kid, but he's still a kid. Let him enjoy his youth. That's what we're trying to do."

Four years is a long time to play junior hockey. The initial excitement over Tavares may be waning slightly, and some skeptics are trying to find fault, forgetting he is only 16.

That June 2009 NHL draft seems so far away. Will he get bored and try Europe for a season, possibly in 2008-09? Might he try to challenge the NHL draft and apply for eligibility at 17?

Could he play as a free agent in the minors?

The Tavares camp says no, no, no, so he could well be filling OHL rinks until 2009.

Slam Sports - Tavares Is The Next One

TSN - Tavares May Have To Share His Handle - Bob McKenzie

Sports Illustrated.com - Where Will They Be?

OHL - Tavares To Be Selected First Overall In OHL Priority

OHL - Tavares Is Making A Bid For The National Team