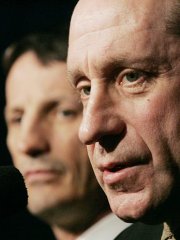 James Mirtle has a great post this morning (nothing new with that!) debating the unwarranted criticism that Habs GM Bob Gainey has taken in the press for not going out and getting a starting goalie to replace the injured Cristobal Huet down the stretch. In a piece titled "Crease Conumdrum", Mirtle difuses what has been said by many in the media of late on the decision.

I wonder if James has heard any of the Montreal sports talk radio shows, where gainey has been shellacked worse than an outhouse toilet seat!

Admittedly, the move, or lack of one by Gainey, left many people scratching their heads.
Among them, is Mirtle cohort, of sorts, at the Globe And Mail, Stephen Brunt, who mused:

"This year, with his team struggling at the trade deadline, with a clear problem to solve and with two obvious alternatives available on the rental market, Curtis Joseph and Eddie Belfour, Gainey chose to pass. He didn't speak on deadline day — he has said almost nothing publicly since his daughter's tragic death at sea in December — so any suggestions as to his thought process are pure speculation. But since he had an obvious short-term problem to solve, and his best goaltending assets (injured Huet and first-round pick Carey Price) were both long-term propositions, he must have simply balked at the price."

Now admire Brunt, who wrote the awesome "Searching For Bobby Orr", but this this little rant on Gainey has annoyed and irritated me since I first came across it days ago. The same thoughts and musings, the same misrepresentation of facts, were seen and heard in other parts before Brunt latched onto them - namely TSN, a fine example of things Hab-itually misinformed.

On one hand, what he writes is factually incorrect, as Ed Belfour was not made available by the Florida Panthers. Not at a respectable price to anyone interested, in any regard. 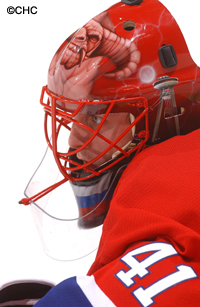 On the other hand, has Curtis Joseph, who it was said could be had for a song, played any better than David Aebischer?

(In my book, my daughter's Pee Wee team backup goaltender has showed more poise than Aebischer, but that's an old rant!)

In another matter, why does Brunt bring up the tragic death of Gainey daughter, in a National paper no less, and then question his mental capacity?

I'll call it what it is - a total lack of professional tact, scruples and respect towards a man who has given his entire adult life to the game of hockey.

It's inconceivable that a writer of Brunt's stature would sink so godamn low! What is he, a blogger now?

The good James Mirtle, while hardly tip-toeing around the Habs most glaring woes, rationalizes Gainey's position with the usual Mirtle clarity. He adds:

"Now, if you're Gainey, and your team is suddenly on the upswing after a long fall down the standings — one that continued unabated regardless of who was in goal — do you make a move to shore up your goaltending?"

Mirtle goes on to make very valid points in defense of Gainey's perceived non-actions at the trade deadline.

My own comments in his post gave birth, in a sense, to mine here.

In any Habs fans wildest dreams, this is far from a Cup year by any means. You cannot plan on or gamble assets on being a long shot Cup contender, even in light of what the Oilers and Flames accomplished the last two playoffs.

Gainey is taking a relative beating, but he did well to sit still. Adding a first round pick and a young defenseman for Craig Rivet fits the plan perfectly.

Mirtle mentions that the youth on the team that has been playing well of late, and I believe that Gainey has resided with letting this present group take it upon themselves to make the playoffs.

The patient Gainey's motto might well be that Rome was not built it a day. Hence, the Stanley Cup will not be won off the backs of goaltenders pushing 40.

Much of the criticism aimed at Gainey's stance stems from the published trade deadline musings of Brian Burke. If you recall, the Anaheim GM was a little perturbed that he didn't get his mits on Rivet, and mentioned that he called Gainey to take him to task on it.

Most people seem to have forgotten that Burke spoke loud and clear before the deadline ended in saying he would surrender no youth or draft picks for the short term.

So just what did Burke have to whine about anyway?

Much of where the Canadiens went afoul after a surprising first 40 games had little to do with Gainey's game plan. A series of blindsided events derailed what was already an imperfect team.

The tension and pressure became a combustable to the team concept. Questions arose, the number one goalie went down, are here they sit.

Never mind the temporary distractions that have been added to the stew - tossing the blueprint at this point in time is ill advised in respect to those setbacks.

I see a young nucleus of a team with a bright future.

Gainey is on the ball. So is Mirtle.

Unfortunately, Brunt was way off course. Rightly, I paid him on online visit and let him have it good.